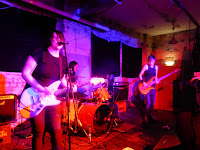 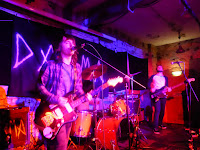 Tonight's Soup Kitchen gig was LIINES' first Manchester show since their triumphant sold-out show back in November last year. Armed with new songs and a new set of fans, they stunned another Manchester full house on Friday night supported by the effervescent rock charms of Darma.

Darma are a relatively new band, only starting up last year when the Denton three-piece released their debut self-titled EP, all four tracks of which they perform tonight. Starting as they mean to go on, they go for the jugular from the start, bold in your face drums, a big guitar sound that pulls no punches and front man Harry fighting his way through the melee with a rough-edged vocal that's perfect for their spiky grunge-laced songs. It's almost impossible not to be drawn in and won over by their infectious energy and their Tameside charm, taking time out to thank us repeatedly as well as their fans who sold tickets for them as well as jokingly asking their dad to come out drinking with them after the gig. They're almost too nice to be making this sort of music.

But make it they do and the whole room falls in love with them. Absolutely free of any pretence and any attempt at being cool, they challenge us to have as much fun as they're clearly having up there. They've got the songs too. What Are You Waiting For with its "the 9 to 5 has got us stuck" is a call to leave the daily dirge behind and let loose as they're doing. Simple but extremely catchy, it's probably the highlight of a very strong set of songs, but Backbreaker should definitely be a contender for a future single. They cover Nirvana's Aneurysm - a brave choice, but one that they pull off with some style, adding their own take to it rather than blindly trying to replicate the original. We'd never heard of Darma before the gig, but we certainly won't forget them. 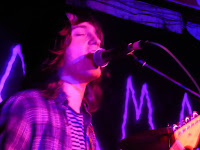 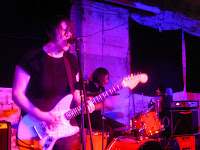 LIINES are on peak form tonight. Buoyed by more recent support from Radio X, BBC Introducing and Louder Than War for their latest single Blackout, they're riding on a big high and rightfully so. Their songs feel so painfully raw and cathartic, yet so brilliantly instinctive, packing a punch that will knock out anyone that gets in their way. The three of them create a sound that is both big but also quite skeletal at the same time, each element clearly audible and distinct in their sound taking the audience down many different avenues during the course of a three minute song, but coming together into something violently ferocious and vitriolic that it'll lift you off your feet. Whether it be Leila's thrusting driving drumming that propels everything along whilst controlling the pace and direction simultaneously or the cutting grooves that Steph cuts with her bass or Zoe's huge guitar riffs that she somehow manages to forge whilst baring her soul through her words,

The crowd, a mix of the already hooked and the curious, are swept along with the tidal wave that's rolling from the stage. There's a new song early on in the set that shows along with the more established songs such as Liar and Cold as well as last year's breakthrough single Never There and this year's follow-up Blackout that they've got some debut album to unleash us at some point in the hopefully not too distant future.

LIINES in 2016 feel somewhat more accessible than they did when we first caught them a couple of years ago, but maybe that's familiarity because it certainly isn't them having lost of any that raw visceral energy that makes them so thrilling and leaves us almost as out of breath as Zoe is at the end. There's something building slowly but surely with them now as people catch on just how they take three basic instruments and create something so powerful. It's impossible not to be carried along on the high that they create when the three of them start playing.