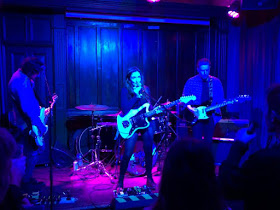 Scarlet returned to Manchester on Friday night to The Castle Hotel as part of their UK tour and delivered an energetic fun-filled half hour set that got the crowd going and also reminded us what a great set of songs they've put together over the past couple of years.

The songs they play, other than a new song called 10, come from their debut album Effigy, which still hasn't had a proper UK release. What tonight shows is that it's now way overdue as people want to hear these songs at home as well as at these shows. Whilst it's frustrating for us, it must be even more so for the band given the release here is delayed due to issues in Japan where the album did come out.  The trio of songs that open the record (Alone, Anyway and Your Control) all feature early in the set and lay down Scarlet's marker for them.

Jessie is a front woman that it's difficult not to warm to, whether it the beaming smile on her face she has for most of the set or her between song chat, at one point apologising for sounding "dead scouse" and reminding us that they come from St Helens, not that any rivalry passes past the boundaries of a football pitch these days in any case.

There's an energy in Scarlet's live performances that starts with Jessie and transmits itself to the other three and then off stage to the audience. It's more than just the songs, it's the boundless enthusiasm and bounce that adds so much to the songs and which the audience start to feed off as the show progresses. The album's lead single Your Control and Who Left The Iron On seal the deal for them though mid-set, making a connection with a crowd that to some extent would be unfamiliar with them and which is part of the process Scarlet are going through of presenting themselves to and winning over audiences across the country. On the basis of this performance that should be something they'll have few problems in doing.