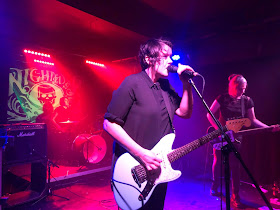 LIINES opened Dave Haslam's WAM (Words And Music) Festival at the Night And Day in Manchester with a fourteen-song set featuring all ten tracks from their Stop - Start album and four new tracks.

It's a return to the scene of one of their earliest triumphs, a sold-out single launch show for Never There, for LIINES tonight as a one-off show at the personal request of Dave Haslam who's joined the ever-growing band of influential admirers of the three-piece over the past few years. It's not hard to tell why people who dedicate large parts of their life to music fall for LIINES. It's their all or nothing spirit, their perseverance against the walls that get thrown up to keep them out and the bloody-mindedness both in their approach to their music and the way they go about their business that makes them such a unique and refreshing proposition.

Tonight's set encapsulates all that. Like the venue they're playing in, and Zoe pays a heartfelt tribute to its owner Jan who died at the weekend, they stand for everything that flies in the face of the modern image over substance trend that's poisoning many younger bands and the scenes that they're part of. LIINES are an old-fashioned died-in-the-wool rock and roll band with no frills, no airs and graces that actually don't realise how bloody good they are. Zoe still seems taken aback at the end of every song, although she should be used to it by now. 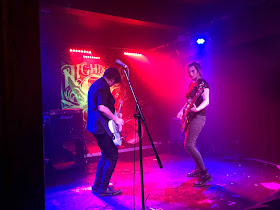 The older songs in the set still sound as fresh as the first time we heard them. Cold reminds us of that night we stumbled across them four years ago in Gullivers on an early December evening to about ten people, Never There of the excitement the single created when radio picked it up and they sold this place out as a result whilst Disappear and Be Here, the double A-side single that kicked off the album campaign, are reunited mid-set. But like the band we've watched and listened to them grow and blossom into, adding more steel, anger and sheer sweat into the mix, the songs hit you so hard and fast that even though you know what's coming you can't dodge the impact they have.

The new songs have all that fire in the belly too, but are graced with the presence of newness, exciting takes on what we already know and love. It's LIINES of course, but it's a LIINES that's starting to explore the boundaries of their sound, buoyed by the reaction to Stop - Start and the critical acclaim that it received pretty much across the board. On And On is a fire-starting kick off to the set, whilst Look For You and Sorry delight those who've already been intoxicated as they promise a bright future. The kiss-off at the end, Not Afraid, basically one line repeated until the songs slams to a halt and they down tools and leave, is the best though, more a statement than a song and all the more powerful for it. 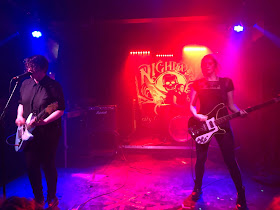 LIINES are a band with an intuitive connection between the three of them. They don't need to look at each other to know what the other two are doing, yet they look and sound even more a unit these days than they ever have. Zoe is breathless, throwing her whole heart and soul into it, looking exhausted a couple of songs in, Leila's drumming might look military in its delivery, but when you hear the beat that underpins everything you know it's far more complex than that, while Tamsin oozes effortless cool, shaking her head, throwing her hair across her eyes and seducing the bass lines out of her four-string.

The crowd love them as you'd expect whether it be those who've been on the journey or the inquisitive ones that have come along to check out the recommendation of yet another highly respected music business figure. With a big show supporting The Slow Readers Club coming up in December, more new songs to come and plans afoot for 2019 it feels like LIINES are ready for the next step up. There's no one else in Manchester making music like them at present (I am willing to be corrected on this for the price of a tip-off), so raw, uncompromising, empowering and threatening to kick through the glass ceilings imposed on them.

LIINES played On And On, Find Something, Hold Your Breath, Look For You, Nothing, Disappear, Be Here, Never Wanted This, Sorry, Cold, Blackout, Shallow, Never There and Not Afraid.

LIINES' official website can be found here.  They are also on Twitter, Facebook and Soundcloud. We interviewed them back in July - read it here. They support The Slow Readers Club at Manchester Apollo on December 14.