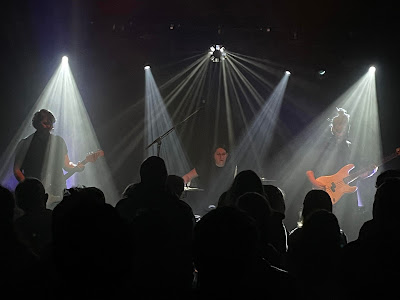 LIINES headed out of town on Thursday night for their postponed Independent Venue Week show at Hebden Bridge Trades Club, a venue perfectly suited to their sound and ethos to play their longest ever set today including tracks from their in-progress second album. Support came from Hebden Bridge's own The Short Causeway.
The Short Causeway open up the evening and the local trio of Claudie on guitar and vocals, Hayden on bass and Rufus on drums make a very positive impression. They belie their youth and inexperience, other than nervous between song chat that's limited to Hayden introducing the next song, with a set that very much feels like they've ingested their parents' record collections and then set about distilling it into something that they can then put their own personalities on. Jangling guitars, almost distorting, vocals that rise and fall below the surface of the guitar / bass / drums combination is very much the formula they use, but they manage this without ever feeling like they're repeating themselves. 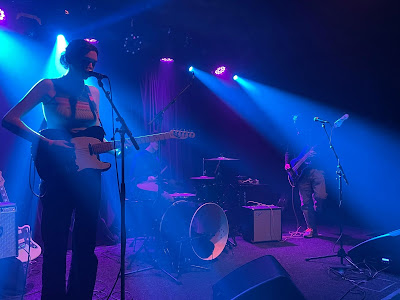 Their one song online, Frozen Man, dates back to 2019, so it's evident that they've used the time during lockdown and since to craft themselves a set of songs that will win them new admirers. They already have a few in the room, but it's clear that those to whom they're new are also impressed. A new song about "dust in a workshop" is a particular highlight as is Under The Carpets and they leave us with the impression that they're going to be the next band coming out of the Calder Valley into the bigger cities either side and making their mark in the not too distant future.
LIINES have been burrowed away writing and recording ("slowly" Zoe jokes) their second album and tonight's set is the longest they've ever played - eighteen songs in total - as they incorporate new material into their existing set of crowd favourites.
The new songs have the energy and ferocity of their predecessors, so much so that Zoe is exhausted and spent by the end of the fifty minutes, but also show LIINES to be expanding their horizons.  There is the short sharp punch to the gut of the likes of Keep On Going, Sorry and Not Afraid that lovers of their debut album Stop-Start will immediately fall for, However, the likes of Wait, Always The Same and the set-closing These Days are the sound of a band pushing the boundaries without straying too far from what has made them so beloved with those who have crossed their path in the past eight years. 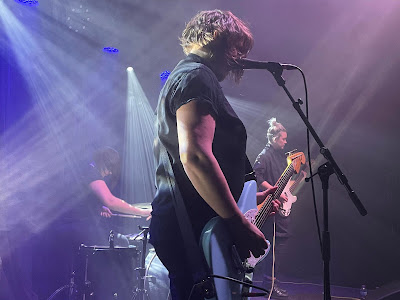 Zoe's breathless after a couple of songs but it never feels like she's going to stop, while Leila's drumming is so fascinating to watch, her concentration and the power she generates is quite phenomenal. Anna, their newest recruit on bass, is critical to the sound and look of LIINES as she delivers her parts with an effortless-looking cool that contrasts with her band mates who are at times exhausting to watch such is the way everything is thrown at the songs.
There's a lot of love in the room for them, the roars of appreciation are filled with love and a connection with the spirit of these songs and the way in which nothing is left unspent at the end of the night. The Trades might not be totally full, but a look around the room and people are singing every word to older tracks like Disappear, Be Here, Cold and Never There because of the connection they make, which is ultimately why we go to gigs and music is so important.
LIINES played Keep On Going, Find Something, Go, Disappear, Another Start, Look For You, On And On, Be Here, Wait, Cold, Blackout, Never Wanted This, Always The Same, Not Afraid, Shallow, Sorry, Never There and These Days.