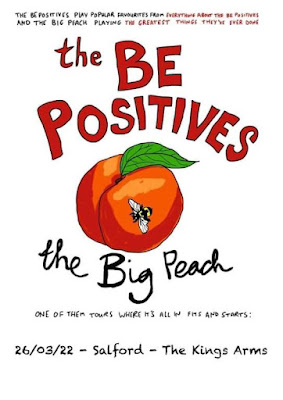 The Be Positives and The Big Peach brought the second night of their combined tour to the intimate upstairs theatre of the Kings Arms in Salford on Saturday night for a sold-out show.

The theatre of the Kings Arms in Salford, just across the border from Manchester, is one of the city region's most underappreciated venues. Hidden above one of the few ungentrified old school boozers, its domed room and impressive sound set-up makes it perfect for live music. Its lack of a stage means it's more suited to a seated show and that makes tonight a challenge for both bands on the bill who are more used to more cramped hot and sweaty standing venues.

The Big Peach open up the evening and they showcase primarily songs from their forthcoming second album. It's been quite a while since we've seen them and there's a noticeable and welcome progression in their sound. They still have that trademark way of combining Freddie, Harry and Henry's vocals, whether it be in unison or two of them harmonising with the third, but it feels like there's a greater depth to their songwriting on these new songs that they've been working on for the past few years. With George, "their wizard", on guitars and Sean on drums, they've always been a formidably impressive and tight live unit with an intuitive ability to create something that feels immediately accessible to an audience whether you're familiar with them or not - their influences are less prevalent in the new songs, but still there in a supporting role to the personality they stamp on songs like Friends And Family, Witches, Lesley and Prestbury John, the latter dedicated to John Hall. 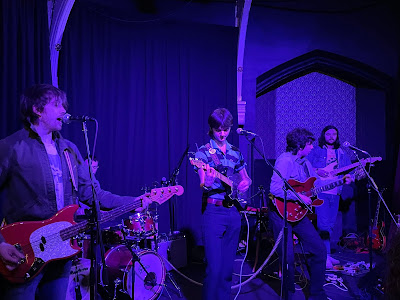 They get a very warm response from the crowd, the front tables are definitely here to see them and they are desperate to get up and dance although they resist that urge. The band themselves seem a little unsure about the seated arrangements at first, but very soon lose themselves in their music. Harry tells us they butcher the Buffalo Springfield standard Go And Say Goodbye, such is the standards they set themselves against on the open mic scene where they learned their trade, but they don't. The pre-pandemic post-debut album singles Run And Hide and All You Got To Do Is Ask have people singing along to them and the roars at the end of each song from those itching to get out of their seats gets louder as they move through a forty-minute set that feels like it's over when they've still got more to come.

It's a tough act for The Be Positives to follow, but they give it their all, playing a set in this tiny theatre as if they were headlining Wembley Stadium. Seated at the keyboards for the first three songs, Mike takes on lead vocals, although they do alternate between all four of them as the set progresses. It takes liberally from their two albums - starting with a trio the debut self-titled (Postcard, Monkey and Always) and then weighing more heavily on last year's Everything About The Be Positives - although there's a real continuity to the set as it progresses, building to a medley at the end where Mike switches between keys and guitars as they successfully merge four songs into one before finishing on Everything About's final track Goodbye. 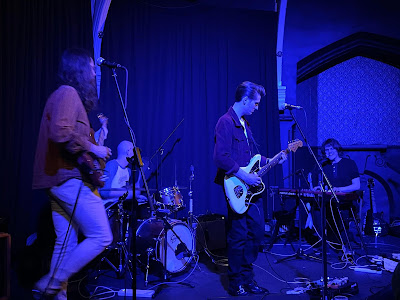 We suspect that like The Big Peach, they want people up and moving about, they tell us it's a little disconcerting having people seated rather than pressed up against the stage but they don't allow that to negatively compromise their performance and the musicianship they display is very focused and impressive built on the innate strength of the songs that they're performing. The switching of lead vocalists, with drummer Callum coming to the fore, keeps the set fresh and unpredictable and there's a real joy in what they do that's very evident and radiates through their forty-five minutes on stage.