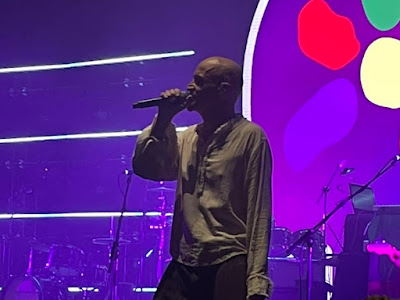 James completed their short two-date tour of Portugal with an ecstatic sold-out show at Lisbon's Campo Pequeno, more accustomed to bull fights than music concerts, supported by The Slow Readers Club and Surma. 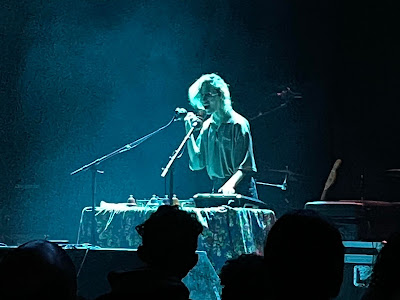 Surma once again opens up the evening and the far superior sound in Campo Pequeno compared to the previous night for both her and The Slow Readers Club allows us to properly appreciate the detail and complexity of her sound that wasn't possible the night before and the crowd's response is appropriately stronger too. The samples are distinct and possess the groove and beats that drive the songs along, allowing Surma to add live guitar and effects from her box on stage whilst losing herself in the music she's creating. A cover of The Velvet Underground's oft-covered but never bettered Femme Fatale is a real highlight, Surma making it her own and only distinguishable by the lyrics - and that's typical of the inventiveness of her art. 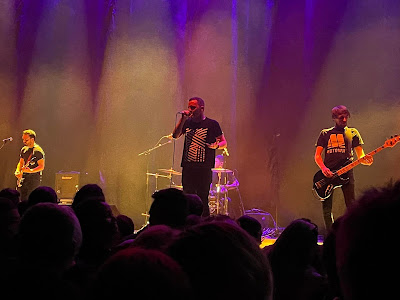 The Slow Readers Club also benefit from the better sound in Lisbon. There's a clarity in the detail of the opening songs that got lost the night before and they're not even at the first chorus of The Wait and the crowd are mostly involved in raising their arms and clapping along to what is to all intents what would purport to be a greatest hits set from the band had they had the acclaim they deserved earlier in their career - with a few missing from the forty-five minute set by simple fact that they now have so many songs that would fit that category. The Portuguese crowd are a perfect one for them - not behest to the English disease of only wanting to hear what they know - and they warm to them immediately, the big choruses, the build into them and the breakdowns that allow audience participation are part of The Slow Readers Club DNA. 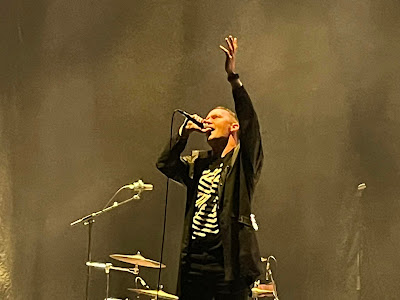 Aaron's developed over the years into a confident front man who knows how to engage an audience, he's learned some Portuguese for the end of the first song that gets him a huge roar of appreciation that draws the audience in a little more, but it's their music that does their work for them. Forever In Your Debt might now be nine years old but it's as powerful and potent as the day it was first played and the final trio of I Saw A Ghost, On The TV ("it's depressing but it's got a good riff") and a triumphant Lunatic to finish has them leaving the stage to a roar befitting of headliners.
The Slow Readers Club played The Wait, You Opened Up My Heart, Plant The Seed, All I Hear, Jericho, Forever In Your Debt, Tell No Lies. Block Out The Sun, I Saw A Ghost, On The TV and Lunatic. 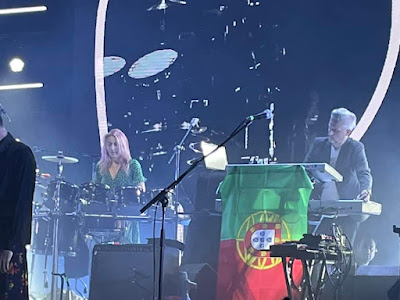 If there had been any doubt about tonight's gig taking place because of concerns around Tim's health as the VIP soundcheck was cancelled to protect his voice you wouldn't have known as James deliver a roaring set to a crowd that absolutely adore them. They're able to throw in curveballs like Honest Joe, Hymn From A Village and Walk Like You and start with Johnny Yen and an improvised section about the state of the world right now, and the crowd response not drop one single bit as the crowd feed off the energy coming from the stage and the nine-piece iteration of James have that in abundance. It allows them to follow the encore trio of Curse Curse, Ring The Bells and Laid with a second unplanned call back where they deliver the best version of Zero we've heard them play so far. Tim tells us it's going to depress us at the end, but it does nothing of the sort because it's real and comes from the heart which is where everything that really matters originates. 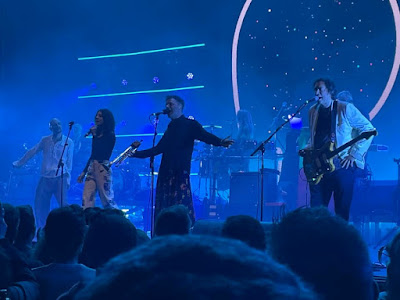 Tonight their energy is accompanied by a sense of real joy coming from them, little smiles and laughs, Tim sharing an in-joke introducing Saul as Warren Ellis after the reluctant violinist had delivered a showstopping solo during Five-O and Saul responding by telling us that whilst he might be a better violinist than he thinks, he's not as good a guitarist as he thinks. It's one of a number of moments of connection on stage, Debbie and Adrian as she bounces round the stage and catches the usually unflappable Adrian's eye and they share a moment, Tim and Adrian as they work out by eye contact where he should come in on a seat of their pants Honest Joe before both smiling. Tim heads back at the end of Getting Away With It to twist new sounds out of Andy's trumpet effects pedal whilst Chloe, never standing still, seems to interact with everyone at some point in the evening. Caution is thrown to the wind too when Tim overcomes his understandable reticence about his crowdsurfing to dive over us during a rousing Come Home. 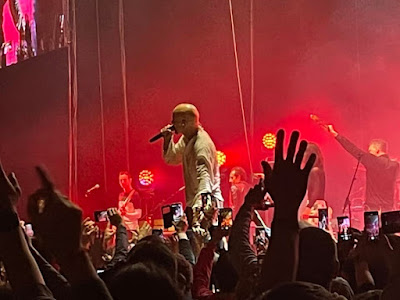 James are a band best experienced when you leave your expectations at the door and the real lack of them and the go with the flow mentality of the Portuguese really makes the shows out here a special event. There's no mass exodus to the bar or toilets when they deign to play a song off their latest hit record, and James still have them despite what many believe, no shouts for a particular song, no evening ruined because they didn't play X and Y. It's very much about the love of the music, an appreciation of how it brings people together and the fact that we, and they, are here at all. Connections are more important than ever in the post-COVID world and nights like this provide a reminder of the good things that we missed out on when everything went dark.
James played Johnny Yen, Waltzing Along, Isabella, Beautiful Beaches, She's A Star, Born Of Frustration, Five-O, Walk Like You, Wherever It Takes Us, Honest Joe, Out To Get You, Hymn From A Village, Runaground, All The Colours Of You, Many Faces, Come Home, Getting Away With It (All Messed Up), Sometimes, Curse Curse, Ring The Bells, Laid and Zero.