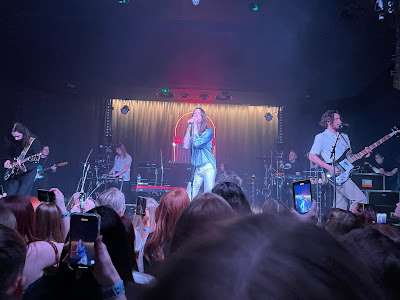 To celebrate the release of their fourth studio album Ribbon Around The Bomb Blossoms played two intimate shows at Manchester’s Band On The Wall on Saturday debuting songs from the album as well as running through old favourites from their first three records to an adoring crowd.
Blossoms’ last Manchester show was a few hundred metres from the more modest surroundings of the tastefully refurbished and significantly improved Band On The Wall at the imposing Manchester Arena eight months ago so tonight feels very much like them going back to their roots. Band Of The Wall might actually be one of the few venues in the Northern Quarter that they didn’t play in their early days but you sense there’s a real joy for them to be back somewhere where you can look the audience in the eye and watch them sing back the words to songs they only first heard the day before. These intimate album release shows, a vessel to pump week one sales, are often short and not very sweet obligations being fulfilled but these two shows feel like a special occasion, as much for those on stage as those in the audience. 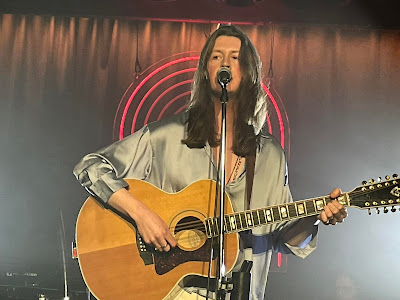 The two sets are similar but not identical with a couple of old favourites - Love Talk, and Smashed Pianos - and new songs - Ribbon Around The Bomb highlights Born Wild and Everything About You - swapped in and out. The new album is represented by the singles - Ode To NYC, Ribbon Around The Bomb, The Sulking Poet - as well as a glorious Cinerama Holy Days that takes the album version and brings it to real life. The Sulking Poet starts with the audience clapping along and finishes with everything dropped out except the percussion and more clapping. It’s being performed live for the first time here but you wouldn’t know it if you’d just walked in the room.

That’s ultimately what makes Blossoms stand out from the crowd and why, four albums in, they’re growing their audience rather than having a fan base that craves their debut and regard anything after as an inconvenience, a fate that befalls many of their contemporaries and even more established bands. Their setlist rolls off like a greatest hits for seventy minutes and there’s a list the length of our arms of songs missing. The pace never drops, each song has a simple but irresistible hook that feels even more potent surrounded by people who’ve been similarly caught by them. 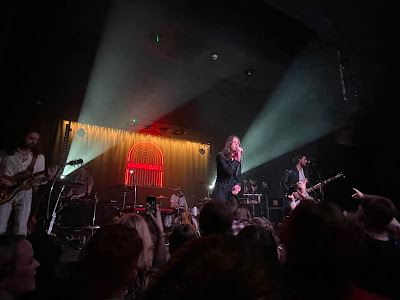 Tom Ogden’s development as a front man has been quite a journey. He still has those moments where he introduces the band as a whole - their gigs would be incomplete without a “we are Blossoms from Stockport” - and individually that date back to the times when this venue would be a huge gig for them and he’s still wearing a key round his neck outside his shiny blue and pink shirts. There’s a real joy in his interactions with his band mates, sharing a mic with Charlie when his fails during Care For, heading to the back to share a moment with best mate Joe on drums, ribbing Myles for his new hair style and sitting to watch Josh. He makes a point of acknowledging Ryan, John and Collette whose percussion and extra guitars fill out these songs.  Whilst the audience’s focus is on him, Blossoms are still very much a gang of friends. 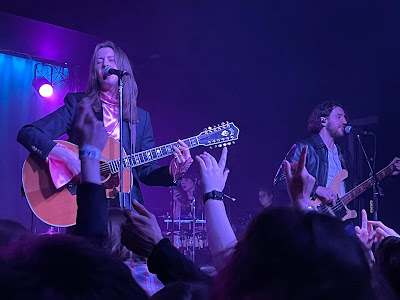 The two shows have a different feel to them. Tom nails it when he says the late audience have probably been on the beer longer, but there’s still a wonderful energy from the crowd towards the stage from an audience that covers all age ranges from teenagers to pensioners. It’s testament to their classic songwriting, the ability to craft songs that anyone can relate to and connect with that for the length of the show you can allow you to forget everything else and lose yourself in the celebratory atmosphere and have fun. And music should be fun as well as a release.

Set 1 - At Most A Kiss, If You Think This Is Real Life, Can't Stand It, Ode To NYC, Ribbon Around The Bomb, The Sulking Poet, Your Girlfriend, Getaway, My Swimming Brain, Cinerama Holy Days, The Keeper, Care For, Love Talk, Born Wild, Oh No (I Think I'm In Love), Honey Sweet, There's A Reason Why (I Never Returned Your Calls) and Charlemagne.

Set 2 - At Most A Kiss, If You Think This Is Real Life, Can't Stand It, Ode To NYC, Ribbon Around The Bomb, The Sulking Poet, Oh No (I Think I'm In Love), Smashed Pianos, Your Girlfriend, Getaway, My Swimming Brain, Cinerama Holy Days, The Keeper, Care For, Everything About You, Honey Sweet, There's A Reason Why (I Never Returned Your Calls) and Charlemagne.