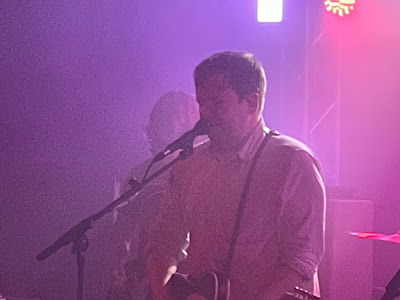 Ist Ist's short UK tour made a stop off at the impressive Parish in Huddersfield on Thursday night for a set that spanned their two albums Architecture and The Art Of Lying and previewed three tracks from their third album.

Momentum is a critical thing for a band as they build an audience, particularly away from their safe crowds of their home town. It can take time but it feels like Ist Ist have a real wave behind them at the moment even without the machinery of the industry supporting them. This show was upgraded from the smaller Venn Street Social and is pretty full even considering that TransPennine Express had cancelled the late trains out of Huddersfield in both directions reducing the attendance. The audience is a mix of some of the growing Ist Ist hardcore and the curious newcomers and both leave equally impressed by a band that you are sense are blossoming further each time they step on to the stage.

The Parish's excellent sound really helps them as it allows you to hear the clarity of detail in Ist Ist's sound that's so critical to really getting them. You can hear the tight, taut punch to Joel's drums, the magic and trickery in Mat's keyboards, particularly on the slower songs, the sharp piercing edge of Andy's bass and full-on emotional energy that sits at the centre of every word Adam sings with the controlled aggression and tension that's so critical to the impact that Ist Ist have on their audience.  They're now in a place where you could pick them up and put them in any venue in the country, large or small, and they wouldn't feel out of place - the big anthems perfect for huge halls but retaining the intimacy and authenticity that permits them to connect. 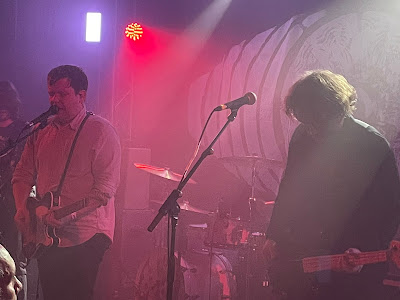 Their canon of songs is growing at a rate too. Where once they dealt in pure power, now they're more subtle even if the the first two of the new songs - Stamp You Out and All Downhill From Here - suggest that album three might be a little heavier than its predecessors. Might is the key word here though as the likes of New Love Song and Heads On Spikes, two of the more intense moments from their first two albums, show that those wanting to pigeonhole them might look silly doing so.

The quartet of songs from Black, through Extreme Greed, It Stops Where It Starts and You're Mine, that precede the final onslaught of Slowly We Escape, show that they have the ability to craft and deliver anthems that wouldn't look out of place at the pinnacle of the catalogues of some of the comparisons they get thrown at them. The rest of the set though proves there's far more to them. The Waves hides its considerable light under a bushel on the recorded version, but has evolved into a huge beast live. You know the moment when the song turns the corner and takes off, but it never fails to lift you off your feet and leave you bruised and battered by it.

With their biggest headline show to date at the Ritz in Manchester in the diary and already selling well ahead of next March, the next ten months are about Ist Ist building their base across the country and further afield, playing to less partisan and smaller crowds waiting to be impressed. The buzz at the end of the show and the seemingly endless queue at the march desk buying up everything on offer tell their own story of a band doing it their own way and succeeding.

Ist Ist played Wolves, Stamp You Out, Fat Cats Drown In Milk, Watching You Watching Me, Middle Distance, Discipline, All Downhill From Here, New Love Song, Emily, Heads On Spikes, The Waves, Fools Paradise, Black, Extreme Greed, It Stops Where It Starts, You're Mine and Slowly We Escape.

Ist Ist are on Facebook and Twitter. Their albums including the forthcoming Live In Manchester release can be ordered via their website. Digital versions of their previous limited edition releases and a number of live field recordings are available to download from their Bandcamp.