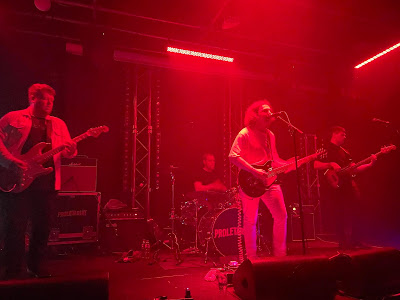 Proletariat played their biggest headline show to date at Manchester Gorilla on Saturday night. Following on from last year's successful sold-out comeback at the Deaf Institute and a stream of singles that have shown their development as a band.
When Proletariat first burst onto the scene a few years ago, they were very much hit and run, gone before they'd even got started, lost in a headrush of loud guitars, quickfire vocals and pure adrenaline. The 2022 version of Proletariat, with line-up changes but with James Cummins still very much at the front, are a far more considered and consistent quantity.
Their songwriting has evolved and the energy, whilst still there on the likes of Go Ahead, Nervous Energy and a late addition to the set, the old favourite Mr Brown, feels much more targeted, but by doing so also more impactful. The message of I'm Not Alright, which James spells out for us in case the song itself for some reason didn't, is about being vulnerable, opening up and letting others in and looking after yourself and dropping the mask of the big man.
It's a theme that runs through many of these newer songs - recent single What Do We Call This Place? and its predecessor, the glorious Losing Control Is A Beautiful Thing that finishes the set - being the prime examples, but the message is there throughout, even in the titles of the likes of You're Free (To Be Who You Are) and Don't Turn Out The Lights.
Whilst James is the focus visually, no band can operate on the strength of a front man alone and his lieutenants provide the power that propels the machinery behind Proletariat's sound that expands to fill the room, comfortably their biggest headline show to date. Connor's lead guitar is made to look effortless by someone who clearly wants to do his thing without putting on a big show about it, but you're drawn to just watch him somehow give these songs the huge driving riffs and moments where they soar upwards. The rhythm section of Josh on drums and Aaron on bass are tight, compact and hold everything together.
They've now got an impressive catalogue of songs; the question for them next is what to do with them. They have the stage power and presence that you associate with bands that make it past playing the local circuit, a confidence and assurance in what they're doing, they just need a plan and a bit of the luck that all bands that get a break often just stumble upon.

They played You're Free (To Be Who You Are), Go Ahead, Don't Turn Out The Lights, Always The Same, As Above So Below, I'm Not Alright, Take My Hand And Run, What Goes Around, Nervous Energy, What Do We Call This Place?, Mr Brown and Losing Control Is A Beautiful Thing.