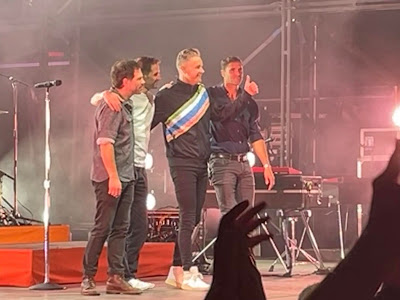 Saturday night saw Keane head to the picturesque setting of Cannock Chase Forest as part of their Forestry Live tour of some of the country's most beautiful wooded venues for a sold out show that featured tracks from across their career from their 2004 debut Hopes And Fears to 2019's comeback album Cause And Effect. Support came from Flyte and Michael Conryan. 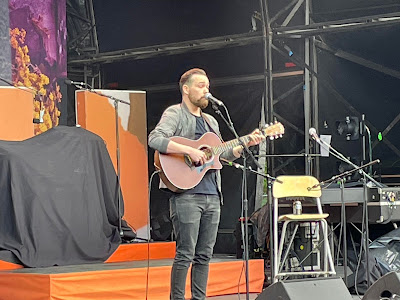 We’d struggled to find much about Michael Conryan online before his opening set but it turns out he’s on these shows as he runs one of Keane drummer Richard’s favourite coffee shops in London. He doesn’t look or sound out of place on the big stage with the crowd seated on the hillside paying attention and listening to his softly accented songs about love and life. Opening track The Making Of Us and his 2018 EP For Pity Sake’s title track are particular highlights of a heartfelt set that’s perfect for an early summer evening in such beautiful surroundings. 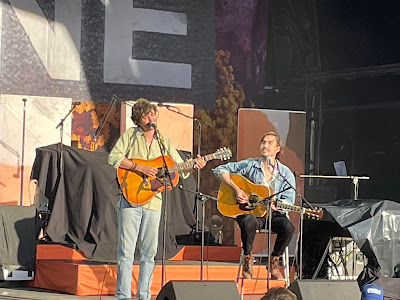 Flyte have a connection to Keane too, having written songs from their second album “in Tim’s garden”.  Now performing as a two-piece with just Will and Nicholas their set is understated, relying on their songwriting craft and the combination of their two voices to create a wonderfully intimate set of songs that still carries to the far corners of the dipped clearing that’s hosting the evening. They showcase songs from their forthcoming third album, which they tell us is hopefully happier than its predecessor, with two songs Even On Bad Days and Tough Love (which will feature Laura Marling) as well as highlights from their first two. They are modest and unassuming, joking about the pretentiousness of their name coming from a character from Brideshead Revisited and telling us that probably only twenty of us know them, but the roar at the end of Cathy Come Home suggests that plenty will be finding out more about them.
There’s then what seems like an interminable wait as dusk starts to set in until Keane appear on stage just after nine. The set takes heavily from their debut Hopes And Fears, a genuinely iconic album with a run of singles - Somewhere Only We Know, Everybody’s Changing, This Is The Last Time and Bedshaped alongside European release Bend And Break - that are sung back as if they are the soundtrack to all of the five thousand lives of everyone in sight. 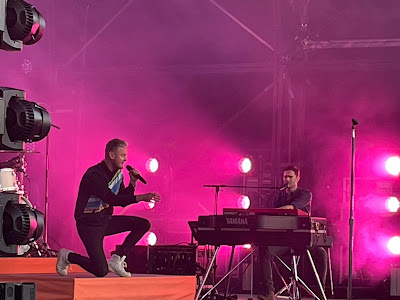 Also heavily featured is the band’s final post-breakup album Strangeland, due for a long overdue vinyl reissue, which features some of their strongest work. Its lead single Silenced By The Night, Disconnected, You Are Young and the night’s final song, Sovereign Light Cafe, described by Tom as his favourite Keane song, are some of the strongest of their career and, augmented by the presence of their fourth member Jesse, pack a harder punch as does the wonderful electro-rock of Is It Any Wonder whose sentiments of betrayal by those in power feels even more apt right now.
Interspersed in between are the Cause And Effect songs - Strange Room, The Way I Feel and Love Too Much - as well as most of their remaining singles. Nothing In My Way is met with a sea of arms and a soaring A Bad Dream with one of mobile phone lights that stretched back as far as the eye could see.  Late set My Shadow sees Tom pick up a guitar. Try Again is performed mid set by just Tom and Tim, Richard taking a good-natured ribbing about needing a rest half way through and is followed by Spiralling, one of the most successful attempts at shifting their sound on their otherwise lightly represented third album Perfect Symmetry. 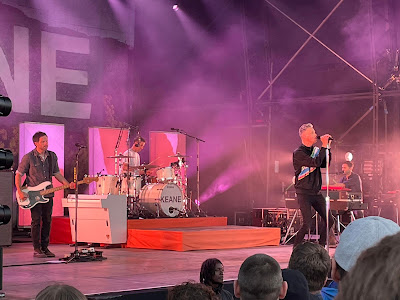 Much was made of Tom’s awkward on stage appearance and persona as he battled his demons at the moment they became public property but now he’s the consummate frontman even if you sense he’s more comfortable using that still phenomenal voice for singing rather than talking. He picks out a group of men dressed as nuns in the crowd, recalls a gig in Stoke that they played to an empty room save for a drug dealer and interacts with the front rows, checking everyone’s OK and chastising the culprits when a fight breaks out,  whilst commanding the singalongs later in the set. Tim and Richard don’t appear to have aged a day while Jesse provides energy as the set progresses as he roamed the stage. 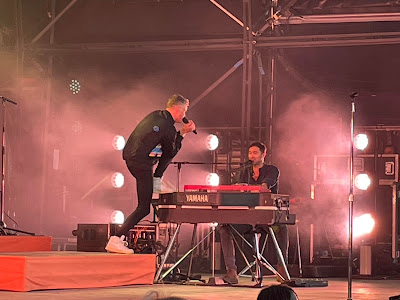 Keane might not be the ubiquitous force that they were in their heyday of 2004-06 where they could seriously lay claim to be one of the country’s biggest bands but at a time when venues are struggling for numbers they’re still as close as you’ll get to a safe bet for a full venue. As we look around thousands of people singing along to their seemingly endless stream of hits, and they play pretty much all of them, we’re reminded of the importance to people of these songs. Even the songs from their comeback album Cause And Effect, now three years old, are greeted like long lost friends rather than an excuse to go for a piss or another beer. Keane might not ever have been the coolest band ever, but give us connection over a cool haircut, rock and roll shenanigans and bravado any day of the week.
Keane played Disconnected, Day Will Come, Silenced By The Night, Nothing In My Way, Love Too Much, Strange Room, Bend And Break, She Has No Time, The Way I Feel, You Are Young, Try Again, Spiralling, Everybody's Changing, Is It Any Wonder, A Bad Dream, My Shadow, This Is The Last Time, Bedshaped, Somewhere Only We Know, Neon River, Crystal Ball and Sovereign Light Cafe.
Keane's official site can be found here and they are on Facebook and Twitter.
Flyte's website can be found here and they are on Facebook and Twitter.
Michael Conryan's is on Facebook and Twitter.
___________________________
Follow Even The Stars on Twitter at @eventhestarsuk and like our Facebook page for all the latest updates
Even The Stars at 13:30
Share