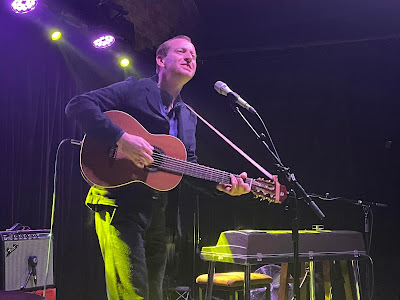 Stephen Fretwell is coming to the end of the second of his tours around his very long-awaited comeback album Busy Guy. A sold-out Trades Club stood bewitched by his spell as he ran through a marathon twenty-three song set taken from all three of his albums interspersed with irreverent chat, audience participation and a wit that made it into a truly special evening.

Later Youth is the new project of Jo Dudderidge, front man of The Travelling Band while that band is on hiatus. His set mixes new songs from the project with Travelling Band songs and even newer ones, alternating from guitar to keyboard. Stripped down to just one man and one instrument the songs have an intensely personal feel to them aided by the explanations Jo gives before them - The Lurker being an apology to ex-girlfriends, On The Missing about an argument he probably lost, the sole single Make It Right being an make-up song and the final song about being rescued by Venezuelan lesbians after having his heartbroken in New York. 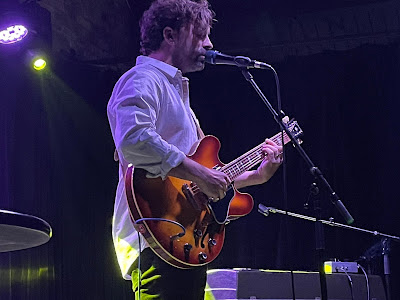 The sparsity allows Jo's rich vocals to come to the fore and not have to fight for space and the quality of the songs to shine through and get appreciated by an audience that stands and listens to them rather than the disrespectful chatter that support acts usually have to contend with. He's joined by Fretwell, a friend back from Manchester in the days when they were both kicking off their careers, for Loser and leaves after eight songs to a warm reception from an attentive crowd who appreciate the quality of the musicianship and the songs.

Stephen Fretwell had been away a long time before his comeback but in many ways it feels like just like yesterday. There's still the uncertainty in his live performance, whether it be a lack of confidence, a fear of standing in front of a room being vulnerable, but the minute he starts to play these songs, everything dissolves away and the room is in absolute silence, save for the clatter of glasses, focused intently on the stage. Half way through the second track Bad Bad You, Bad Bad Me, he stops and asks if he can look the front row in the eyes because he's conscious he spends the set avoiding eye contact otherwise. 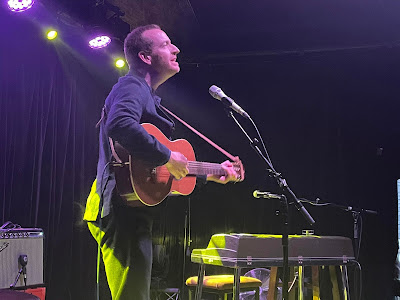 There's a modesty to him as well that has been there since his early days, a sense of wonder that people connect to these songs and to him. His comeback album Busy Guy last year was the finest of his career to date, but he explains he's started the set with a series of tracks from his debut Magpie because he doesn't want to assume that people want to hear the new album. He then tells us he still feels a fraud singing songs he wrote as a young man when he's now much older and doesn't have the bravado and that he needs to get better at his patter. Later on, he talks himself into a strange situation with a couple at the front who have been hugging throughout by suggesting that he feels like he's in a threesome then tries to talk his way around and out of it and ties himself in knots.

That's the magic though in the Fretwell live experience. Whilst he has a list of songs written down it feels like most of it is spontaneous, spur of the moment. He takes requests from the audience even if he hasn't played songs for years. He gets two guys up on stage to provide harmonies on Rose, a potentially risky move, and then follows it with Funny Hat because someone shouts about the hats and then asks for the song. Later while seated at the keyboards he takes on Coney, the opening track from his second album Man On The Roof, another song that he tells he hasn't played for years. He also invites Jo Dudderidge back on stage for a couple of duets on Run and a cover of John Lennon's Jealous Guy. 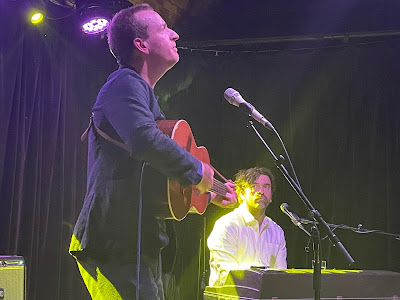 It's less successful when he takes on Scar as he struggles to remember the second verse to a song he hasn't played live for fifteen years and Bumper Cars which he only manages half of, but this makes it far more special than a run-of-the-mill songwriter playing a set of songs that never change in the same order.  With Fretwell you can see him ad-libbing mid-song, stepping back from the mic to add new little parts to the songs and flying by the seat of his pants. No wonder he says he's terrified, he's not doing it the way it should be done by the book.

If he had any worries about the reception for the songs from Busy Guy in a world where nostalgia, even for the albums Magpie and Man On The Roof which were only minor hits but vitally important to the devoted audience Fretwell has around him, they're very quickly assuaged by the response to the quartet of The Goshawk And The Gull, The Long Water, Oval and Embankment that he delivers in a run around half-way into the set. Green, the album's final track, is a showstopper, the silence in the room could be cut with a knife such is the universal reverence for its hushed whispered revelations.

The biggest roars, and singalongs, polite mind, are for the aforementioned Run as well as Emily and his final song New York, when at about ten past eleven he's given a one-song warning when he could probably have continued for another hour given how engrossed he was in the set by this point. However, over the course of an hour and forty minutes, Stephen Fretwell gave us a timely reminder of why there was so much interest in his whereabouts for so long, a unique songwriting talent with a disregard of doing things by the book preferring to follow his own weird and wonderful course.