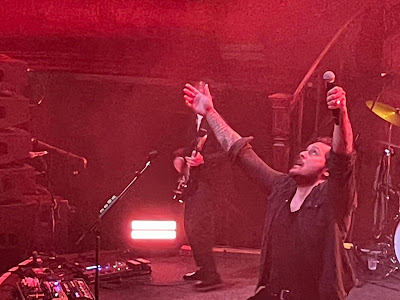 Gang Of Youths concluded their UK tour to promote their top ten album Angel In Realtime with a sold-out show in front of an ecstatic audience at Manchester's Albert Hall with two excellent support slots from Tom A Smith and fellow Aussie Charlie Collins. 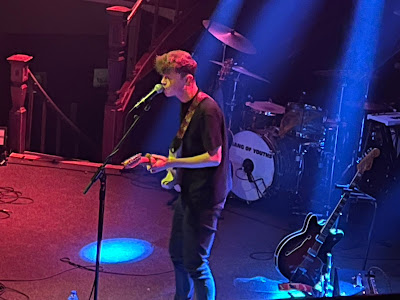 Tom A Smith (the big capital is important he tells us) opens up the night with a solo set armed just with an electric guitar from which he wrestles a sound that fills the corners of the cavernous hall, something supports in here often fail to do. His set is heavily based around his debut EP including single Wolves which has had Radio 1 airplay.  He’s got a self-assured and confident stage persona even without his band behind him that he’s transferred across from his online covers and shows during lockdown and when he mocks his hometown Sunderland FC when he introduces Never Good Enough he displays a sense of humour too. He steps away from the mic to just play guitar, puts dramatic pauses into songs as he soaks in the size of the crowd and venue. He goes down a storm as he finishes on his most recent single Dragonfly, having won over a new set of admirers. 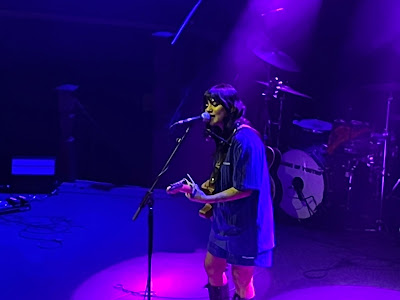 Charlie Collins is probably unknown to many of the crowd before the set but she charms the crowd with what she describes as her “crazy bitch persona” before her recent single Backseat Valentine that finishes her set with her dancing around the stage in the instrumental break. Not afraid to share too much she tells us a new song she plays is about a recent break-up with an ex “who was a cunt, maybe I should call it Cunt” and telling us that she can’t hear the shouts from the crowd “but they better be nice because my period started and I’m very sensitive” before warning “don’t date a foul- mouthed Aussie”
She plays Wish You Were Here from her debut for a member of the crowd who requested it and adds in a cover of The Cranberries’ Zombie which silences the chatterers when she sings accapella and her voice reaches every corner of the room with its depth and power.  If we didn’t know her at the start of her set we very much did by the end.
We first stumbled across Gang Of Youths in the Madrid heat of 2018 at Mad Cool Festival in a tent out of the baking heat. They haven't played Manchester since and you sense the anticipation in the room as the crew get the stage ready building and building. Their last show here was at Gorilla and since then their reputation has grown, aided by festival appearances such as a triumphant set in the tent at Neighbourhood, to the point where this feels like an intimate show from a band that should be playing much bigger venues. 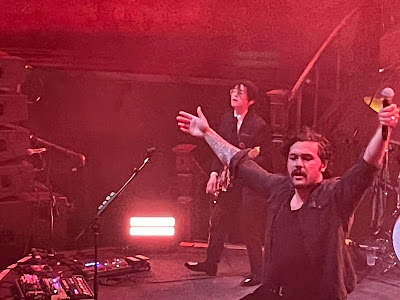 Those much bigger venues are arenas and stadiums. It may have taken over a decade for Gang Of Youths to get to where they are now, but tonight confirms that they're simply on the lowest rungs of a ladder to the top. Whilst we've seen bigger names play this venue, we've not witnessed such an outpouring of love and communion, even on a Sunday night.  Having expanded to a seven-piece with the addition of percussionist James, who Dave tells us won a Young Musician Of The Year competition back home and who is part of the establishment that they're trying to corrupt, their sound is full and powerful yet still at moments retains a poignant intimacy that connects with the audience. They swap instruments with regularity that keeps the sound fresh and exciting and interesting. It's a mean trick that few can pull off, either veering into meaningless bombast or simply not packing a strong enough punch.
The set is heavily based around their recent UK top ten album Angel In Realtime, with nine of the fourteen songs coming from it, four from its predecessor 2017's Go Farther In Lightness and a solitary track Magnolia from their debut The Positions. It's on that track that Dave comes out into the crowd for a moment of connection, as if a deeper one were needed, climbing the barrier and joining the mosh pit. The audience though seem to know every word of every song, even though Angel In Realtime has only been out just over a week. Whereas other bands seem to get people standing around complaining when a band plays new material, it's welcomed here with a gusto that feels special.
Gang Of Youths very much connect with the city of Manchester, Dave telling us that there are so many cultural touchstones here that helped form the records they've made and that to be loved in the North of England is somehow more important than anywhere else. Later on he chides us for not fully throwing ourselves into Let Me Down Easy with the insult "we're not in London or Brooklyn, we're in Manchester." 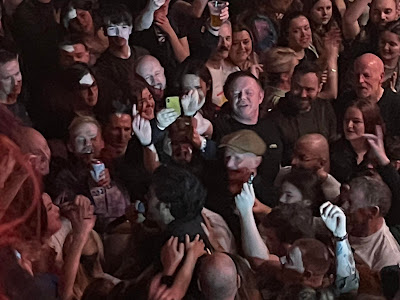 Of course there's plenty of artists who come to town with sycophantic bullshit like this, but you know they mean it, because they mean everything they do. When Dave lays his heart bare on Brothers, the song about finding out everything he thought he knew about his father changing after his death and the discovery of a long-lost brother, the whole room's hearts break with him and there's a silence and listening that you never usually get in a venue like this. When he talks about music being an escape, that dancing can be an escape from everything else in the world that can overwhelm you, he strikes a chord with the crowd. There's a moment where he enquires about someone pulled out during a song and reminds us that we should consider safety first and enjoyment a close second and that he's not Travis Scott.
As the main set ends with In The Wake Of Your Leave, the crowd sing back the refrain to them and start it up again at the end of What Can I Do If The Fire Goes Out as they wait patiently to leave the building, a process which really lets this venue down. The band are both gob-smacked and delighted by the response they get, genuinely taken aback by the love in the room for them. They'd better get used to it.
Gang Of Youths played The Angel Of 8th Avenue, The Man Himself, The Heart Is A Muscle, Tend The Garden, Unison, Spirit Boy, Brothers, Forbearance, Let Me Down Easy, Magnolia, The Deepest Sighs The Frankest Shadows, In The Wake Of Your Leave, Goal Of The Century and What Can I Do If The Fire Goes Out?
Gang Of Youths website can be found here and they are on Facebook and Twitter.
Charlie Collins' website can be found here and she is on Facebook and Twitter.
Tom A Smith's website can be found here and he is on Facebook and Twitter.
________________________________
Follow Even The Stars on Twitter at @eventhestarsuk and like our Facebook page for all the latest updates
Even The Stars at 17:04
Share