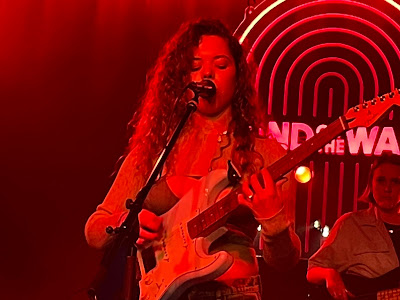 Nilüfer Yanya brought her recently released second album Painless to a sold-out Band On The Wall on Monday night supported by Léa Sen.

French producer Léa Sen opens up the night with her first ever performance in Manchester, a solo set with electric guitar and with a simple yet effective backing track on a couple of songs.  The first part of the set are songs from her forthcoming debut EP and she finishes with two new demos which she tells us represents the headspace she is in now, the final track with lyrics she tells us she'd written on the train today and therefore needed them writing down. 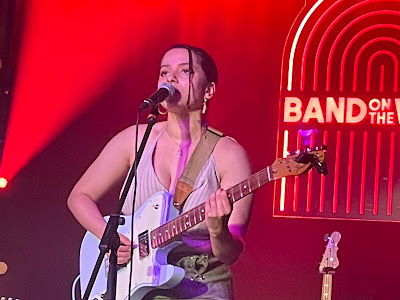 The songs very much feel like they have a deep emotional meaning for their creator and this very much comes across in the performance, particularly on the two new ones which she says are where her headspace is currently, whether it be the starkness of just her guitar and voice, or the beats that she adds from the backing track. I Feel Like I'm Blue and recent single Hyasynth are particular highlight of the set that goes down well with a crowd that's mostly attentive while she's playing but who she has to tell to be quiet at the end after they're distracted by her tuning as she prepares and starts her final song.

Nilüfer Yanya's second album Painless has won widespread critical acclaim and she's drawn a real mix of people to a sold-out Band On The Wall, the devoted young women down the front who know every word to all the songs and feel connected, the curious hipsters around the fringes and those drawn in by the way that she mixes pop, rock and shades of jazz into something that very much stands her out as someone who could be pigeonholed into either of those categories but really exists on a plain above them.

There's moments, particularly when Jazzi Bobbi's sax leads the instruments, where you're taken out of a rock gig into a dark basement club, yet with a tight and compact rhythm section of Beth on bass and Ellis on drums, they can also sit firmly in indie rock territory, such as on Nilüfer's breakthrough single Baby Luv, L/R or their cover of PJ Harvey's Rid Of Me which retains an honesty with the original whilst having her own stamp all over it. 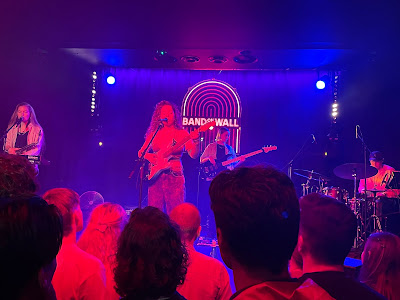 The set is pretty much split down the middle between tracks from Painless and its preceding debut Miss Universe and EPs. The older songs feel like they've been updated to fit into the underlying vibe of the Painless tracks live, Nilüfer's guitar at the centre of it. Her playing has a complexity to it without being visually showy and it provides the perfect contrast to both the sax and her vocals.

Songs build slowly and wrap themselves around the audience rather than overpowering them meaning there's not a great deal of movement on or off stage, but that matters little in reality as the audience are totally charmed from the outset as evidenced by the deafening roars for an encore after the intoxicating In Your Head finishes the main set.

Nilüfer Yanya played midnight sun, belong with you, chase me, The Unordained, L/R, Rid Of Me, Baby Luv, stabilise, Same Damn Luck, anotherlife, Angels, the dealer, In Your Head, Crash and Heavyweight Champion Of The Year.