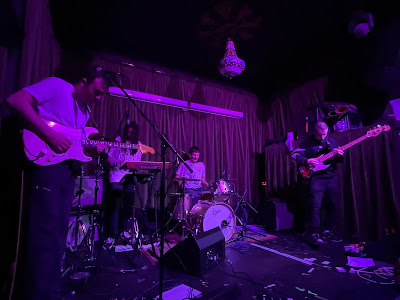 London post-punk four piece Folly Group's debut headline tour in support of their new EP Human And Kind rolled into the ballroom above Gullivers in the Northern Quarter of Manchester on Thursday night supported by the equally impressive Qlowski. 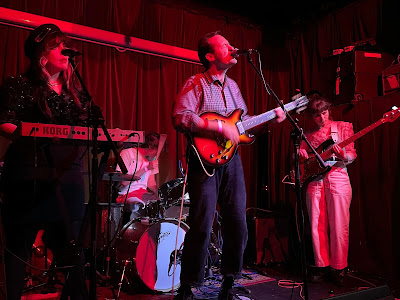 Qlowski are a four-piece who describe themselves as from London, but the core duo of Michele on guitar and vocals and Cecilia on keys and vocals hail from Bologna in Italy. Their nine-song set takes heavily from last year's debut album Quale Futuro? and is a compelling assault on the senses propelled along with tight intense drumming and fast frenetic guitars that really set the energy levels high throughout a thrilling set that draws the audience in.
There's a real contrast between the two vocalists, Michele lost in his own world, the focus and concentration etched across his face as he blasts out half-spoken half-sung vocals that contrast yet work in perfect unison with Cecilia's lighter, airier delivery. It works particularly well on the stunning To Be True, the centrepiece of the album with a long instrumental break where the four of them stretch their horizons. They resurrect an old song Needle, not on the set list, for a friend's birthday and its jittery staccato energy ups the ante further before they finish on Lentil Soup and Quale Futuro's lead single, the misleadingly named Folk Song. It sets a very high bar for the headliners. 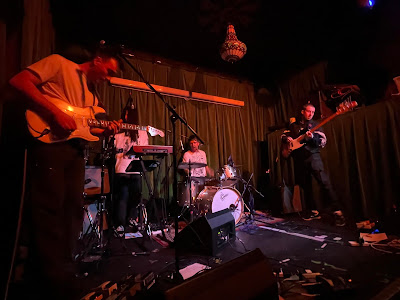 This is Folly Group's first headline tour and is in support of their second EP Human And Kind, the recent follow-up to last year's debut Awake And Hungry and their set compromises both EPs in full save for the title track of their more recent offering, plus the interim single Fashionista. Their set-up is an interesting and fascinating one - they have a drummer, Sean, on lead vocals, which is still unusual even though it shouldn't necessarily be so, and they merge traditional drums and percussion with heavy use of synth drums and percussion. It allows them to stand out whilst still be part of the post-punk onslaught that is emanating from the London scene at present.
The songs, great as they sound on record, really come to life in the room though. The agitated energy and frustration that they voice are amplified by seeing the whites of their eyes, the instinctive relationship that the four of them have formed in a relatively short space of time as they set out to impress audiences that are waiting to be impressed by them. The Manchester crowd take a little time to warm to them but three songs in, a guy pushes through the crowd, stands at the front and starts dancing and the mould is cast.
The songs have a consistent feel and mood to them, as if they're two sides of a debut album rather than two EPs released a year apart, but each one retains its own personality and identity, something that will help set Folly Group apart from their peers who often struggle with that. The one-off single Fashionista also displays their ability to craft something that wouldn't feel out of play on the radio playlists that they'll need to inhabit to expand their audience still further. Louis's backing vocals play a big role in that, giving the songs an extra emphasis that's needed in the absence of a front man throwing himself around the stage. That lack of a show man up front though strips back the impression that Folly Group leave to the music though and that's a powerful one. They'll be back in town in bigger venues and everyone will wish they'd have been at this show.
Folly Group are on Facebook.  They played Fewer Closer Friends, Faint Of Hearts, Four Wheel Drive, Awake And Hungry, Ripples, Fashionista, Paying The Price, Butt No Rifle, The Tooth Of February, Sand Fight and I Raise You (The Price Of Your Head)
Qlowski are on Facebook and Twitter. They played All Good, Ikea Youth, Absence Makes The Heart Grow Fonder, Larry's Hair Everywhere, A Woman, To Be True, Needle, Lentil Soup and Folk Song.
________________________________