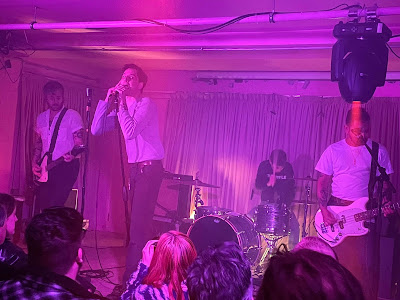 Crows brought their second album Beware Believers to the Pink Room of Yes in Manchester on Friday night for a scintillating performance that focused heavily on the new record with a few old favourites thrown in for good measure. Support came from last minute local stand-ins, the mysterious Splint. 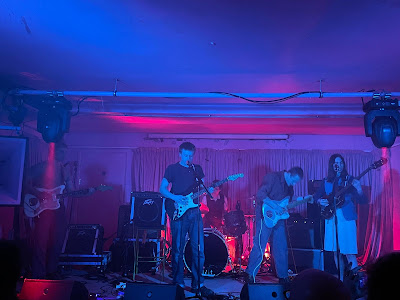 Splint are a last minute stand in for the support slot and the mysterious Manchester based supergroup of sorts (featuring members of The Orielles, Julia Bardo and Blanketman) who don't have a release to their name yet open the evening with a five-song half-hour set that's very different to their bands in which they normally operate. The songs are long with extended instrumental sections that allow them to follow their natural creative instincts rather than attempting to write something more commercial to please those that must be pleased these days for a young band or artist to get exposure and success, whatever that means nowadays. At moments each of them looks lost in their own thing, the two guitarists in particular and the vocals often get lost in the swirling heady mix and it feels like we've been invited into a private jamming session and it's really rather good.
Crows are on a high with their second album Beware Believers having pierced the top ten of the vinyl charts announced earlier in the day and their twelve song set takes heavily from that album with seven songs being augmented by three from their debut Silver Tongues and The Itch and Whisper from their early EPs. Less showy than many of their peers, their approach is direct, targeted and powerful and it's the simple intensity of their performance of the songs that draws you towards them and into their world. Sam Lister's drums threaten to obliterate the room, harder than on the records and they combine with Jith's bass in a potent rhythm section that allows Steve's guitar and effects pedal to work their magic.
All attention is fixed on James though as he leans forward over the front rows and delivers vocals that make you listen and not take your eyes off him even when half way through a glorious Slowly Separate, one of the many highlights of the set, he jumps out into the crowd and looks for connections eyeballing those screaming the lyrics back at him. With simple but exceptionally effective lighting, once the smoke machine whose over-enthusiastic often blights the gig experience both upstairs and downstairs at Yes, emphasising the raw primal energy of the band, it's an absolutely compelling and thrilling live experience. They also demonstrate the ability to tone it down with Sad Lad without compromising on the power of the connection they make. 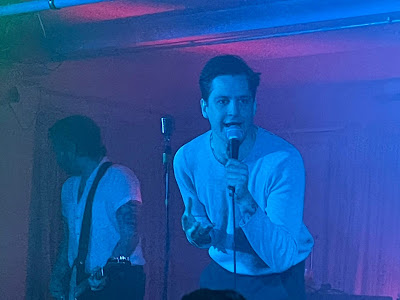 The crowd take a while to warm up despite the energy that's emanating from the stage. It takes James to come out amongst us to really get things moving and it's only the last two songs, Hang Me High and Chain Of Being, both from their debut, that a mosh pit ensues.  A woman who's spent most of the gig talking to her mates walks forward, asks James for his hand to get on stage and then proceeds to stage dive on an unsuspecting front row much to James' bemusement and then amusement. Perhaps it's the unfamiliarity of a new album released just the week before, or the worrying trend that people only seem interested in a band's first album when they see them, but it's certainly not to do with the quality of the songs from Beware Believers that are stronger live as well as on record than those from its predecessor. The rest of the time, save for a few down the front, the audience is disappointingly static for a band that create so much raw power; it's very much a case of us not them being the issue.
Crows played Closer Still, Garden of England, Wednesday's Child, Slowly Separate, The Itch, Healing, Whisper, Dad Lad, Room 156, Meanwhile, Hang Me High and Chain Of Being.
Crows are on Facebook and Twitter.  Their tour continues at Birmingham Muthers Studio (April 9), Leeds Brudenell Social Club (10), Glasgow Garage (11), Sheffield Sidney & Matilda (12), London Scala (13), Amsterdam Paradiso Small Hall (17), Brussels Botanique Witloof Bar (18), Hamburg Molotov Skybar (20) and Berlin Maschinenhaus (21).
Splint are on Facebook.
________________________________