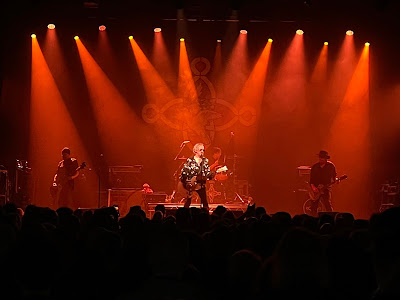 The Mission's Déjà Vu finally rolled into Manchester on Thursday night, two years after the original date for a career-spanning set to an adoring audience of old and young, supported by contemporaries The Rose Of Avalanche and Manchester's own Ist Ist. 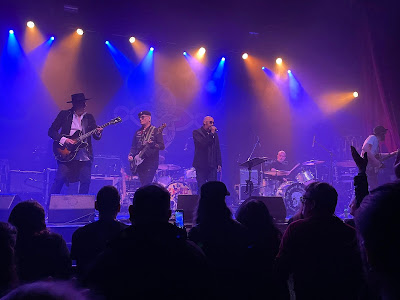 There's already a healthy crowd in the Ritz when The Rose Of Avalanche hit the stage, some here just for them it would seem by the response they get to the likes of Velveteen and LA Rain, songs that might have been lost in the midst of time had it not been for their reunion that this tour when first announced was part of. Most of the energy on stage is with front man Paul who bounds around as if reliving their youthful heyday. Half an hour probably isn't long enough to fully appreciate them, they announce a Manchester date in July for those who want to see more, before they finish on a cover of The Stooges' Loose that wakens the crowd up more. 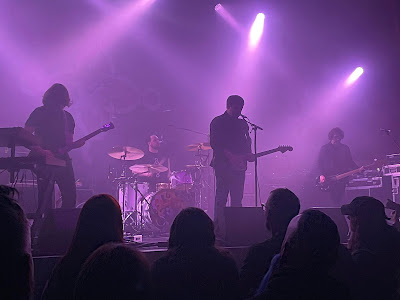 Ist Ist’s return to The Ritz after their successful support slot with The Chameleons here in December coincided with the soft announcement of their own headline show here on 31st March next year, we assume coinciding with album three given they introduce a brand new song Stamp It Out that hints back at their harder-edged beginnings whilst sitting perfectly alongside a selection of their big-hitters - Fat Cats Drown In Milk, Emily, Black, You’re Mine, It Stops Where It Starts and Extreme Greed - that form just a small sample of the bigger Ist Ist palate that is out there in the world. You sense now that they belong on stages like this, almost lost in a fog of smoke, the sound filling this cherished historic venue as if it were made for this room. The Mission’s crowd, initially sceptical, audibly warm to them as the half hour passes by in a flash and they leave the stage with the roar of a thousand new fans ringing in their ears. 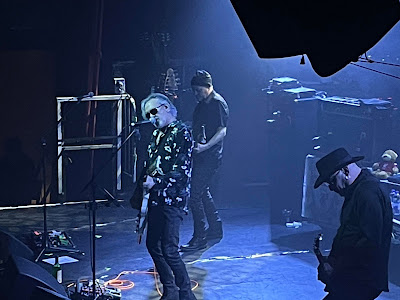 The love between The Mission and their fans is palpable, so much that, as a very casual fan, we feel like an intruder at a party. These songs mean everything to the people around us, whether down the front where the moshpit ensues or up on the balcony where those whose days throwing themselves around are behind them. It’s their chance to relive their youth, dress as they please and not feel like an outsider in the image-obsessed social media centric city Manchester is becoming or simply relive their past in a safe environment. It’s pleasing to note it isn’t just gnary old men either, there’s young women and men too who likely weren’t born when some of these songs were first conceived singing along to every word too.
Those songs are delivered, save from a breakdown in Wasteland, true to what has created this bond of love between band and audience, Wayne sensing the moments to let go of the songs as if they’re no longer their property. They’re even forgiven a Liverpool flag on the bass amp and a reference to the best football team being thirty miles up the road with a chorus of good-natured booing rather than a hail of beer and glasses. The main set finishes with just the drum and the audience singing the chorus to Deliverance that you swear if they hadn’t left the stage we’d still be there singing. 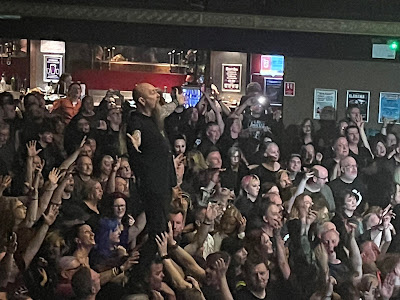 The set is as you’d expect heavily weighted to their heyday but Wayne explains “you want to hear old songs, we want to play new songs, there’s a transaction going on here” as they play Fearful from their last album 2016’s Fall From Grace and open the encore with Met-Amor-Phosis from the same record. The moments of most intense connection are of course those big-hitters, the guy stood on his friend’s shoulders throughout the whole of Deliverance who catches Wayne’s bottle of wine he throws to him at the end and the communal coming together of Tower Of Strength that sends everyone out into the dark night at the end on a high that started an hour and a half earlier.
The Rose Of Avalanche's official website can be found here and they are on Facebook and Twitter.

Ist Ist are on Facebook and Twitter. Their albums including the forthcoming Live In Manchester release can be ordered via their website. Digital versions of their previous limited edition releases and a number of live field recordings are available to download from their Bandcamp. They play Liverpool Jimmy's (April 21), London Shepherds Bush Empire (23, with The Mission), Leicester Firebug (27), Milton Keynes MK11 (28), Macclesfield Christ Church (30), Huddersfield Parish (May 5), Sunderland Independent (6) and Hull The Polar Bear (7).