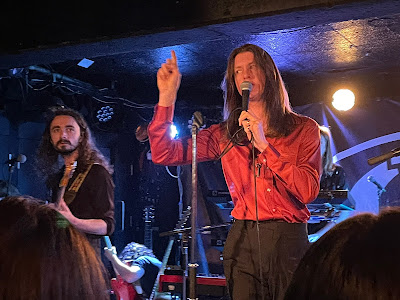 Blossoms continued their promotional campaign for their third number one album Ribbon Around The Bomb with two intimate shows at Glasgow's King Tut's Wah Wah Hut on Sunday night. Performing two hour long sets of sixteen songs that were in effect greatest hits sets, they reminded us of the depth and quality of their back catalogue.
There's a real buzz around King Tut's, one of the country's finest and most-loved small venues and a rite of passage for bands on the way up. As we make our way up the legendary steps we noticed Blossoms' name on the 2015 step and when Tom asks who was here then he jokes that he's glad not everyone lied because it wasn't as packed back then. He does later engage with a fan who'd seen them back in the even earlier days when they played Nice N Sleazy just round the corner on their first UK tour. Tonight's sets are full of songs that have picked people up on their way from their number one self-titled debut in 2016 to this year's Ribbon Around The Bomb and the set has something to delight everyone.
They've clearly been thinking out their set. The show starts with just Joe and percussionists John and Colette on stage banging out drums as the other five join and dive straight into I Can't Stand It. (Oh No) I Think I'm In Love has a breakdown that the first show's crowd take as a call to start a "here we, here we, here we fucking go" chant that thankfully the second crowd resist the temptation to. The set-closing Charlemagne takes all the band introductions that have been interspersed within the set since the days of the Blue Cat shows in Heaton Moor and combines them in another breakdown. With Blossoms now an eight-piece live act, somehow crammed onto the tiny Tuts stage, John, Colette and additional guitarist Ryan Ellis get their moment in the spotlight too. Care For has a moment too where Tom tells Myles to "do the slide" on the keyboard and it's now such an integral part of the song they should re-record it with it in. 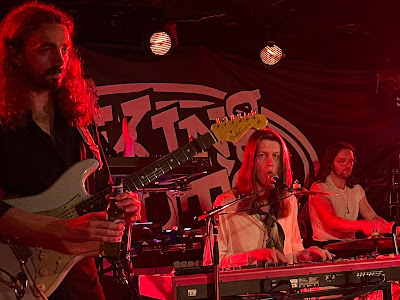 There's a real sense of joy in the performances - Tom looks the most relaxed he has, calling out audience members, shrugging at some incomprehensible shouts from the crowd, changing the "stately homes of England" line in Blown Rose to Scotland, laughing off some of the most obscure song requests. Whilst we'll never hear the likes of Come Sunday and I've Seen The Future, there's also a series of songs that no longer can be squeezed into a set of this length such is the wealth of songs Blossoms have at their disposal without the quality or the connection with the audience dropping. Staples of previous shows like Blow, Cut Me And I'll Bleed, My Favourite Room and Cool Like You as well as Ribbon Around The Bomb's lead single Ode To NYC are conspicuous by their absence, but no one seems to mind given we're seeing a band that fill academies and now arenas in such close-up surroundings.
The rest of the band look equally comfortable, there's knowing looks and smiles throughout. Josh's guitars seem to be much higher in the mix than they have been at previous shows and his often underrated work very much comes to the fore, whilst the irresistible grooves of Ribbon Around The Bomb's stand-out track Everything About You and Honey Sweet come from the locked-in rhythm section of Charlie and Joe who seems to relish being close enough to actually see the audience compared to the bigger halls and stages that Blossoms frequent these days. The band seem to feed off the energy and joy coming from the audience and feel fuelled by it as they kick into the long slog of promoting the album past its initial release. 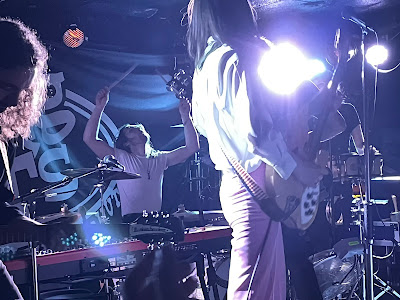 That these songs still work in such small rooms as well as they do in arenas is testament to the quality of the songwriting, the relatable lyrics that has everyone from the older ones of us that are dotted around the room to those still in their teenage years standing next to each other singing every single word of every song, joining in with the crowd participation moments in The Sulking Poet and (Oh No) I Think I'm In Love and losing their shit to There's A Reason Why (I Never Returned Your Calls) and the final Charlemagne and everything that preceded it. It's something that the grumpy old men whose tired bands wouldn't even fill this room forget when they vocally diss and dismiss Blossoms for the crime of being popular and acknowledging the leg work that entails. Stripped back to the basics, music's about connection, about songs that mean something to you, that make you think that it was written for or about you, the "deep sea dive into your head" line on Everything About You, and Blossoms are still ticking those boxes in ever increasing numbers. And who'd argue with six hundred Glaswegians.
Blossoms' official website can be found here and they are on Facebook and Twitter.
They played I Can't Stand It, If You Think This Is Real Life, The Sulking Poet, Your Girlfriend, Getaway, My Swimming Brain, The Keeper, Care For, Honey Sweet, Blown Rose, Ribbon Around The Bomb, Everything About You, (Oh No) I Think I'm In Love, At Most A Kiss, There's A Reason Why (I Never Returned Your Calls) and Charlemagne.
________________________________