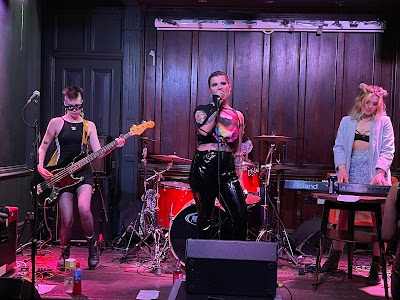 The Red Stains returned on Wednesday night for an opening slot with another new line-up, introducing Amber on keys and guitar to give a new dimension to their chaotic yet enthralling sound and visual experience.
You sense The Red Stains are doing their development, their learning as a band in public. From those earliest shows when the excitement of something new and different covered up for their inexperience with their instruments and stage presence, they're developing in front of our eyes into a potentially formidable outfit. Adding backing vocals, tweaking the line-up, slowly introducing new songs which are more direct and pointed while retiring some that haven't aged as well is something some bands do before they've even set foot on a stage and isn't half as interesting a story.
A case in point is their next single TV Static, a song that made its first appearance just as we went into lockdown, but which they've transformed into a beast of a song, guitar riffs spewing out over a punishingly tight and compact rhythm section and Sterling hollering out backing vocals in the chorus over Natalie’s half-sung half-screamed as she throws herself to the floor and yells "turn that button up to self-destruct."  Jump The Met, their fighting talk to their arch-nemesis the Metrolink ticket inspector, has gone from a snotty rant to a full on punch to the gut.
Sterling introduces their newest track - "Gender isn't a binary, gender isn't just male or female, gender is a spectrum, let's glitch the binary code. This one's called Fluid, happy fucking pride month" - and if you'd dismissed The Red Stains as a bit of a fun, this is where they get serious and make sure that you know they mean business and have a message. Mannequin, their debut single, takes aim as an ex of Natalie’s who "lost me and now he's losing his hair" as justice for the objectification that the song rallies against whilst Smile challenges the song's protagonist to "don't tell me to smile".
It's not all serious though. There's references to walking out of Asda with a big TV under your arm (Trolley Dashers), random between song chat and the final song Smile ends with Natalie swigging from a bottle of fluorescent pink alcohol while the band let loose with a jam that feels as if could collapse under its own weight at any moment before they finish by chanting "Binley Mega Chippy" repeatedly. But don't be fooled because The Red Stains will rip your head off when you let your guard down.