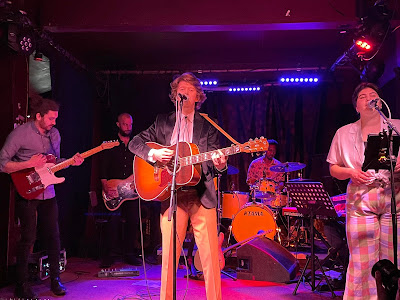 James Holt played a rare full band show on Wednesday night at Manchester's Night And Day Cafe, showcasing a rockier side to his art that we don't often see at his solo or duo shows whilst still allowing the finer points of his songwriting craft to shine through.
It's almost impossible to dislike James Holt whether or not his music grabs you or not. He always has a smile on his face, an infectious one that makes you listen to the stories he tells between songs which are immaculately crafted, imbibed with his personality but with a timeless songwriting streak running through the middle of each and every one of them, even though the styles are quite varied. There's also an emotional moment where he explains last year's single One Hand Strikes The Other is dedicated to his late friend Gay Wharton who founded the domestic violence charity Fortalice which it was released to support in his native Bolton.
Tonight he has his band with them, featuring regular collaborator Molly on violin and backing vocals, James on piano, Dan on guitar, Kez on bass and Aden on drums with a couple of special guests playing extra guitar - Barry on The Wedding and Amy on the encore of The Beatles' I Saw Her Standing There. There's a real connection between them musically and whilst the rest of the band allow James to take centre stage, they make an immeasurable contribution to these songs, most of which we've become familiar with at solo shows or with just Molly accompanying James. There's also a wonderful camaraderie between them, a friendship as well as a joy of playing together that the audience really react to. The two special guest guitarists are also given their moment in the spotlight, letting loose impressively as the songs hit the breakdown. 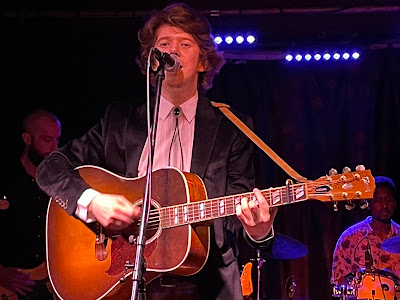 It's testament to the quality of the songs that they feel as perfect with the band as they do in more intimate and stripped back surroundings. And whilst the audience isn't as big as some of his previous shows, a problem that seems to be impacting everyone operating at this level post-COVID and as the cost of living crisis takes hold, he has those of us there absolutely rapt, a few dancing down the front, the rest standing attentively nodding their heads and tapping their feet, and these songs make you do that involuntarily. There's a real warmth in the room, the barrier between audience and artists is removed and it feels like a genuine celebration of one of Greater Manchester's most talented and criminally underrated songwriters.

He played Make My Day, Pendulum, Come Out To Play, Alone Again, Mystery Girl, One Hand Strikes The Other, The Wedding, Magic Disaster, Little Green Light, A Night On The Blue Mountain, Whatever Happened To John and I Saw Her Standing There.