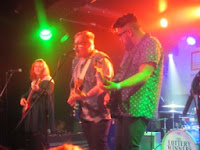 The North West has a reputation for producing dark, dour, spiky music with attitude.  Leigh's The Lottery Winners are bucking that trend by producing nailed on singalong pop classics.  Their sold-out show at the Academy 3 proved that there's more than meets the eye with them.  We went along to see how they could just hit the jackpot.


Having seen The Lottery Winners twice before playing to a handful of people at the launch of a jewellery store in the Northern Quarter and opening up at Dot To Dot, I raised an eyebrow when they announced a headline Academy 3 show.  The last time I was in this room was to see I Am Kloot so it seemed like an ambitious move.

But the room is rammed full, there's girls at the front with huge pretend glasses mimicking the band and there's a real buzz of expectation as the cheesy sixties tunes fade and the band come on stage. Their forty-five minute set is littered with beautifully crafted pop songs and the crowd, to a man and woman, seem to know every word to every single one of them.

They open with previous single Elizabeth which had brought them to the attention of Channel 4.  Frontman Thomas asks as the song breaks down and the audience sing along whether there's anyone from a record label there to witness it. It's a bit of a cheesy question, but it's a relevant one.

New single Learn To Sleep and its b-side I Only Wanna Be With You look set to follow it and help build their following still further and there's a whole set of potential classic songs to back them up. 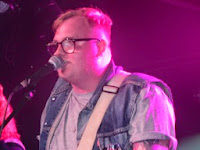 The really great thing about The Lottery Winners, other than their songs, though is their humility.  There's no rock star pretence, they look like they're having a ball up on stage, amazed by the response they're getting from their crowd.  In an industry where being cool is seen as a must, they buck that trend by just being themselves and having fun and their audience feed off that. There's even time for a guest spot with Tom Hingley joining them to sing the Inspiral Carpets' classic This Is How It Feels.

It'll be interesting to see where they go next and whether they'll make the breakthrough their songs deserve. It's easy to anticipate that they could be a marmite band and they may have to resist a record label trying to market their image consciously rather than just letting them be themselves naturally.  But, at the end of the day, they're a great live band with a catalogue of songs that pull off that difficult trick of being made for radio whilst retaining all the hallmarks of classic songwriting. 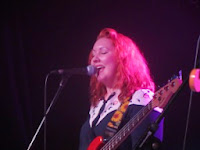 I Only Wanna Be With You

Something To Leave The House For

This Is How It Feels

The Lottery Winners website can be found here.  They are also on Twitter and Facebook.  New single Learn To Sleep is out soon.
Posted by Even The Stars at 21:00