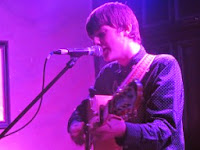 So many singer-songwriters get tagged with the next big thing albatross as record labels strive desperately to unearth the new Gallagher, Fray or Bugg. We went to see 19 year old Ryan Jarvis who might just add his surname to that hallowed list.

Back in April we reviewed Ryan's debut EP Outside This Town and recognised it as a fantastic start which singled him out above the jobbing singer-songwriters on the Manchester gig scene.  Since then his star has been slowly but surely rising, picking up some high-profile support slots as well as performing at a growing number of festivals including a successful slot at Kendal Calling last weekend.

The Castle gig, supporting Gareth Icke, was the first time we'd got to see him and he didn't let down our expectations.

Immediately you're struck by Ryan's confident stage presence.  It has all the hallmarks of that bubbling arrogance that the city's greatest musical sons all possess, safe in the knowledge that they can back it up with their music and the voice.  And it's some voice he has too, clear, distinctive and unique.  Whilst he looks and sounds at home up there on his own, you can also imagine him fronting a band as well. 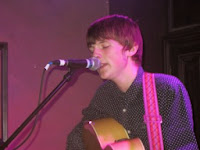 He plays all four tracks from the EP and they blossom in the live environment of one man and his guitar.  There's also three other new songs in the set - Your Notes, My Change, By The Water and Two Nineteen - which bode well for the recording sessions coming up for the follow-up release.

We're also treated to three covers, Dylan's It Ain't Me Babe, The Quarrymen's In Spite Of All The Danger and James' Tomorrow - all interesting selections which demonstrate that he has a deep love and knowledge of music and, particularly in the case of the latter, isn't afraid to put his own stamp on great songs. Maybe, for a change, someone is going to take that next big thing tag and justifiably wear it as a badge of pride.  That someone might be Ryan Jarvis. Go and see him in one of these intimate venues before he hits the bigger halls.

It Ain't Me Babe (Bob Dylan)

In Spite Of All The Danger

Shy Away
Ryan’s official site can be found here.  He is also on Facebook and Twitter.
Posted by Even The Stars at 21:24