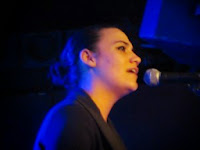 Nadine Shah launched her incredible debut album Love Your Dum And Mad with a sold-out show at London’s Lexington venue.  We went along to watch her captivate and silence the crowd.

Nadine Shah is no run-of-the-mill singer-songwriter.   Her Norwegian and Pakistani parents and her upbringing in the North East make sure of that.  Her songs are often written from a male perspective and deal with some very uncomfortable subject matter such as depression and bi-polarism.  Her own delivery of those songs live feels like she’s unburdening herself, at times looking into the semi-distance, almost oblivious to those around her, her fellow musicians on stage and the crowd that are holding on to every word of her half-spoken, half-sung slightly accent-tinged stories.  She appears constantly on the edge of breaking down into tears as if the performance is her catharsis. 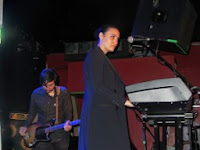 Tonight, she’s a little more sombre, a little less chatty than she usually is, but it’s a huge occasion for her given it’s the release date for her debut album and the weight of expectations have shifted accordingly from being an up-and-coming artist to a genuine potential mainstream artist on the basis of some very positive press for the album.

She does however still show her more humorous self-depreciating side, joking at the fact she repeatedly thanks everyone throughout the set.  She introduces her father who is stood at the back of the venue, but tells him he can’t dedicate a song to him as she doesn’t have any happy ones and that the next one is a love song and “that would be weird.”

Nadine will never be easy listening, but with the accompaniment of a band that covers guitar, bass, brass, drums and electronic effects, yet remaining modest enough in the background to allow complete focus on her voice, recent single To Be A Young Man Again and the follow-up Runaway, which together close the main set, demonstrate that she can produce songs that wouldn’t feel out of place on daytime radio.  As the pace on these songs quicken, you capture the intensity and ferocity of her vocals rise with them.

She closes her set with a solo version of Cry Me A River.  It could so easily be a throwaway cheesy cover as have many of the attempts at it been, but it’s converted into something that has more emotion in one note than the original has in the entire piece.  You look at Nadine at the end and she looks spent, exhilarated, relieved, but as if she has for fifty minutes cast aside those demons.  There’s been many comparisons to P J Harvey and Nick Cave, for me the closest she comes to anyone is Kristin Hersh, but, in reality, she’s beyond meaningful comparison and a truly unique artist. 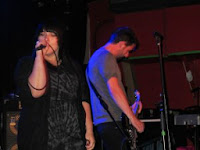 Support for the evening is the excellent Retriever from Newcastle, who have been on the scene for a couple of years, but deserve a much-wider audience and acclaim than they’ve had so far.  Their recent EP Dead Grotty is a step up for them.  Chappy, Garth and Fintan create a wall of guitar and drum noise, accomplished beyond their as yet uncelebrated status, over which vocalist Jackie invokes images of riot girls past, but with a compelling depth to her voice.

They don’t try and look cool, sound cool or be cool and that’s probably counted against them, but they’ve produced so far a series of great EPs and one-off singles that, along with this full-on live set, makes them a thrilling proposition on stage.

Nadine Shah's official website can be found here.  Her debut album Love Your Dum and Mad is out now.   She is also on Twitter, Soundcloud and Facebook.