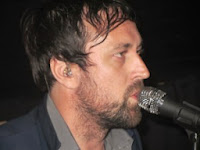 NO are a six-piece band from Los Angeles. They concluded a short UK tour, including a PIL support and Hard Rock Calling, with a sold-out free show at London’s Sebright Arms.

NO’s debut EP,  Don’t Worry You’ll Be Here Forever, was my favourite release of 2012.  Pitched somewhere between The National’s High Violet and Elbow’s Asleep In The Back, it is six songs of classic indie angst-rock wrapped around warm emotive vocals and some killer hooks that draw you in and don't let go until they're branded on your conscience.  They followed it up with a double A-side single What’s Your Name / Eleven Eleven on White Iris late last year and made their first trip to the UK in November 2012 where they supported Father John Misty.  They’ve now completed their as-yet-untitled debut album for release later this or early next year.
This tour has seen a couple of headline London shows and the Sebright Arms is their last one before heading back to the US.  The venue’s packed out as the buzz about the band has been steadily growing as the EP has been slowly building them a following here without them having toured regularly.  Looking round the venue though, you can see people mouthing along to the four songs that they play from it and the strength of the reaction that they get as the set progresses clearly shows that they’re winning over those that came along curious to check them out. 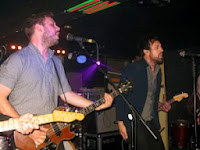 Their live sound is heavier than on record without losing their melodic edges even in a low-roofed venue like the Sebright and they pull off that rare trick that only the very best indie-guitar bands can.  They sound completely like you’ve heard the songs before, yet they have a distinctive mark of their own.

Even the new songs that haven’t been released yet, the imposing, slightly unnerving North Star, and the euphoric set-closing Hold On envelop you in that warm blanket of familiarity whilst leaving you with that thrill of something a little bit special, away from the standard fodder that so many of the hyped-up all-boy guitar bands that make the trip across the Atlantic serve up.

The songs from the EP, in particular Another Life and Stay With Me, are rapturously received like old favourites and will hopefully make the cut for the album as they deserve a much wider audience than they’ve had to date.

In Bradley Carter they have a confident and engaging frontman not afraid to make eye contact with the front rows of the crowd as well as with the rest of his band throughout the set and his moves suggest he’s someone who looks like he’d be perfectly at ease on the bigger stages that NO are certainly destined for when their album finally hits.  Get the EP whilst it’s still available for free. 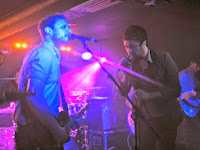