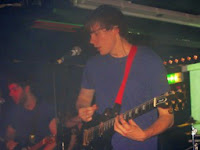 The Sebright Arms is sold out, no mean achievement for a band from Manchester that hasn't set foot in the capital and has just this week released their debut single proper Part Of The Echoes (if you exclude last year's 100 only Tunnel Vision / Sins Unknown 7").

Hype is a horrible word and often relates to bands that just don't deserve it, but you sense there's a buzz building around Embers that could turn into a wave.  There's not been a full-on guitar band for years fit to lace the boots of the likes of My Bloody Valentine and Ride, but finally there might be one.

Right from the opening chords of the not very inventively titled Intro you can see Embers blow away all the pre-show nerves that they've been open about on Twitter and Facebook. Whilst they're still shy and a little reticent to say too much between the songs other than to tell everyone how much being here means, their music more than does the talking for them. Part Of The Echoes, a majestic sweep of a song on record, is cranked up louder than is probably advisable without losing that enchanting melody that fights its way through the twin-guitar assault.
They're much more than just loud guitars though. Shadows starts with a demented violin / viola duet which transforms into a vast sonic landscape that's way too big for a small room like this.   Embers aren't afraid to think big, write big and play big and they've spent time working on their craft rather than just coming out and taking the short easy route.  It's paying dividends for them at the moment as they've now caught the eye of XFM, for whom they did a session earlier in the day and the guest list reads like a who's who of the London music industry. 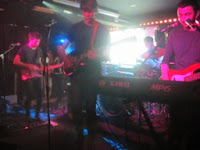 Their set is short in terms of songs, but certainly not on quality. New song Love The Lost stands up against old favourites Sins Unknown and set closer Hollow Cage.  Each of them maintains their own identity whilst being uniquely Embers, which is no mean trick. Vocal duties are shared between three of them and violinist Sophie, on loan from fellow Mancunians PINS and a viola player and there's a bank of keyboards which provide different flavours to the songs dependent on which ones are brought into play.

There's also a set of visuals on the screen at the back of the stage which work perfectly with the songs.  Hollow Cage is accompanied by apocalyptic scenes of clouds, waves, waterfalls, rain and fire all speeded up to match the chaos of the song as it hurtles towards its conclusion and they finish heads down, lost in their own instruments but yet still totally together as a band.

Embers are a band that is reaching for the sky and almost deafening you on the way there. It's a long time since I've had a ringing in my ears quite so loud the morning after a gig. Yet to dismiss them as mere noise merchants would be doing them a massive dis-service.  They're one of the most inventive guitar-driven bands around at the moment and they're only at the start of what they can achieve both musically and in terms of their reach to audiences.  It's hard, almost impossible, to believe that this is their first headline show.

Part Of The Echoes

Hollow Cage
Embers website can be found here.  They are also on Facebook, Twitter, Soundcloud, Bandcamp and You Tube.  Part Of The Echoes is out now on transparent 7" vinyl on Killing Moon Records and I-Tunes.
Posted by Even The Stars at 21:59