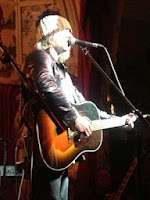 
It's very rare you go to a gig and feel like bursting into tears.  When the artist on stage does just that, overcome by the emotion of everything, it brings you close to that. Never the most emotionally resilient artist on stage, Damon alludes to a series of personal crises in the time since he last toured and how the music specifically has saved him.  He's taken aback by the scale of the reaction tonight and feeds off it to pull himself together from a point where you wonder whether he'll complete the gig to it being a triumphant homecoming show and hopefully the first fragile steps to get him back where he belongs, making simple, but effectively brilliant music as he's done through the entirety of his career.

His vulnerability is affecting, particularly as he doesn't immediately look like a man who would show those emotions, but he wears his heart on his sleeve and shares stories with the crowd. We get to hear from the whole range of that career, from his first EP through to This Electric from his last album It's What I'm Thinking.

Naturally, it's the older favourites like Silent Sigh, where he ventures to a horribly out of tune keyboard that he doesn't want to play, and All Possibilities that get the best reaction, but what the set shows is that his ability to craft a tune hasn't diminished over time.

Journey From A To B, from 2006's Born In The UK, is one of his finest moments and testament to his ability to overcome his own cynical view of his song writing ability to produce music that stands proud with his Mancunian peers and contemporaries that the Dunstable-born Damon thinks he pales into comparison with.  He even makes reference to some of those who had influenced him by lighting twenty-four candles at the back of the stage for departed friends, mentioning Tony Wilson and Rob Gretton before talking about The Charlatans' Jon Brooks, who died recently.

He's joined later in the set by Mike TV to accompany his acoustic guitar, which he uses throughout the set except for the main set closer Silent Sigh, where he spends five minutes trying to get the keyboard right and shrugs off a request from a female member of the audience with the line that she needs to be good at blow jobs for him to play that, before passing it off as a joke to avoid offence being taken.

His humour is dark and bleak and often directed inwards at himself, but you feel he's recognised that music is what he's best at and people want to hear what he has to say. He also has a personal need to do it as well, so the future looks bright for potential new material at some point given it's three years since It's What I'm Thinking, the supposed first album of a linked trinity.

Tonight is about taking that first sensible step after a trauma. He passes with flying colours in front of a partisan home crowd, but that reaction is more to do with the basic quality of the songs he's performing rather than a calculated, cynical marketing campaign. It gets to a point where you just want to climb on stage and help him.  Ironically, the one-song encore is a cover of The Stone Roses' I Wanna Be Adored, which, whisper it quietly, has more depth and vision in this version than the recent live versions of the original classic.

Damon's next appearance is at Cavfest in Didsbury on September 21st with a whole series of bands including The Suns and The Minx as well as kids' activities.