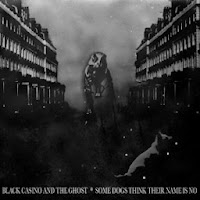 
Opening track Boogeyman is a statement of intent.  It's full of dramatic vocal and musical leaps and sets the scene for a lot of what is to follow. Johnny Boy also showcases the incredible vocal range Zoot has and the whole thing is made more epic and chaotic by an almost psychotic drums and guitar assault on the senses.

The mood changes with the beautiful Ballad Of The Ghost where Zoot's vocals don't just provide the lyrics, they also drive the melody and pace of the song in a way that very few singers can without sounding contrived.  The trick is also pulled off on the next track Wolf Is Howling, which is featured on Falling Into Pieces, and is here in all its ebbing and flowing glory, underpinned by a beautiful menacing keyboard line that wouldn't be out of place in the key scene of a blockbuster movie.

Been A Bad Woman starts as if it's going to be a jazz number through the first verse, before it changes pace half way through and becomes what feels like a free-form jam. Son Of The Dust starts off as a neurotic nursery rhyme in the verse talking of being a good Christian son, driven again by Zoot's vocals, before breaking down into a string-laden middle-eight and haunting chorus. It's followed by recent single Hoboland, a stomping romp of a tune with Zoot veering off in all directions at the drop of a hat.  It's chaotically brilliant and unlike pretty much anything you've heard before.
If It Doesn't Hurt takes the pace down, a strummed string intro and soothing warm vocals enunciating the mood of the song and, unlike the rest of the record, it doesn't indulge itself in multiple schizophrenic personalities, showing a softer more measured side to Black Casino. Connect The Dots goes back in the nursery rhyme territory in the initial verse, before slowly building into a vaudeville completely over-the-top but absolutely thrilling chorus.  There's all sorts of background noises going on as well as it careers to its finish.  It's all over in less than two minutes, but there's as many ideas in one song as some bands put in an album.

The one track that doesn't quite work in this vein is We've Seen Nothing, but that's as much to do with the strength of what's around it than the song itself and the fact it's instrumental so doesn't have Zoot thrashing about over it.

They save the best for last though.  I Like You Cause You're Free puts everything we've seen before on the album into a package lasting just over three minutes, a slow beautiful piano opening that ascends and builds until what feels like a whole orchestra crashes in to accompany Zoot's heavenly layered vocals before dropping to a simple ending, almost in complete contrast to what's gone before.
Some Dogs Think Their Name Is No is a great record. It's got so many ideas, so much variety coursing through every song on it that there's enough here to keep you finding something new every time you hear it.  It's a challenging record, just when you feel there's something to hold onto, it throws you a curveball and goes off at tangents where you don't expect it to.  Where you can throw a comparison at most new bands that'll stick, there's nothing here, there's shades of people, but ultimately Black Casino And The Ghost are pretty damn unique proposition and this is hopefully just their opening gambit.

Black Casino and the Ghost's website can be found here.  They're also on Facebook, Twitter, Soundcloud and Bandcamp.  Dates are being planned before the end of the year.
Posted by Even The Stars at 20:25