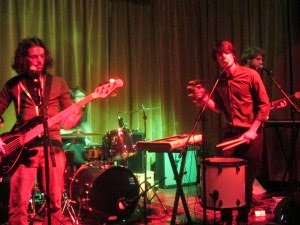 It's no mean feat to get the first song you put out in the public domain played by XFM and BBC Introducing before you've even played a gig, but Etches have done just that.  We went along to their live debut at the recently revamped Gullivers in Manchester to see what the buzz is about and came away impressed.


It's difficult to judge a band on the strength of one track and Etches have kept a little bit of mystery about themselves with only shady photos adorning their facebook page and rather than posting a series of demos they've restricted us to one track so far, the pseudo-electronic yet hook-laden sprawl of Let's Move In, which drags some overt eighties influences right into the middle of the second decade of the 21st century.
This is their debut gig, their public unveiling, and what's clear, even as they set up, is that they're not a group of youthful chancers that have stumbled together, but five accomplished musicians who've found a common love of their art.

Like the demo, they've merged together strands of electronica with some absolutely killer melodies.  The singer, and I can't name him because the mystery extends to not naming the band members, has one of those voices that evokes memories of Ian Curtis, yet it's accompanied by beautiful vocal harmonies from the rest of them that shouldn't necessarily work but absolutely does.

Let's Move In is obviously a standout track, but the six-minute Cuff and set-closer (which sounded like it was called Shark Hunter) are much darker brooding monster of songs and demonstrate that there's more depth and range to their sound already than many of their more established contemporaries.  There's a couple of potential follow-up singles as well in the set.
Their mysterious public persona is going to generate some serious hype around the band, particularly if they can continue to match the quality of Let's Move In with future releases. They already sound fully formed as a band despite this being their debut gig and there's no doubt that they're going to put on some formidable live shows going forward.

Email ThisBlogThis!Share to TwitterShare to FacebookShare to Pinterest
Labels: Etches