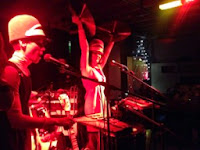 Candy Says came to Manchester for the final night of their Space tour to support the release of their recent cassette and download only single Kiss Kill.  Support came from rising local favourites The Lottery Winners.

We've written about The Lottery Winners before when they sold out Academy 3 back in August.  Fallow Cafe's a much smaller venue, but no less suited to their unique brand of jaunty up-lifting pop songs.  As we said before it'd be easy to dismiss them, and singer Thomas takes great pleasure in chiding me for calling them the uncoolest band in Britain in that earlier review, until you listen to their music which you can't help but fall in love with.

They engage with the audience as well, getting them to sing along to Say The Word, and taking the piss out a bloke's frankly horrific scarf at the front.  They're all self-depreciating, joking that the stage is too big for them because they're fat and telling us how their Mums want them to get proper jobs and didn't buy their records. 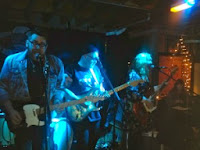 Their songs though do their work for them, opening track Artifical Flowers is driven by a stomping drumbeat and Thomas' vocals are perfectly matched by Katie and Robert's harmonies.  Although that basic formula serves them well, there's enough variety and depth to their songs that they're not a one-trick pony.  Tonight they add a sax player for a couple of songs.

If they can avoid a record label picking them up and trying to treat them as a novelty act then they've got the potential to go far based on their songs. Previous singles Elizabeth and Learn To Sleep bear all the hallmarks of a hit single in a parallel world not dominated by X Factor and Celebrity Whatever.  In short, they're the perfect pop band if you're the one who's not too cool for school.

Candy Says' two singles to date, Favourite Flavour and Kiss Kill, have been huge chunks of pulsating electro-disco.  Live, their sound is a little more stripped back, despite the fact that are so many instruments on stage that it's practically impossible to move, but without retreating too far from that sound.

They are what you could lazily describe as "quirky",  they sing parts of songs in French, they have a mannequin, Candy, by the side of the stage, they give out free sweets from the merchandise desk and they're dressed in outfits for the "Space" theme of the tour.

The dual vocals of JuJu and Elisa Zoot complement each other perfectly, sharing lead duties, sometimes with one taking the lead and sometimes as a call-response. Dead On Arrival and Understand The Night, which both feature on their Garage Recordings cds they've just released, are brooding electronic tunes that show a darker and more menacing side to their sound, whilst Lord's Mistake and Melt Into The Sun are full on, foot to the floor stomping monsters of electronica.

It's closing track Superhero that really stands out though.  It's a brand new song, which augurs well for their upcoming album.  It's crammed full of ideas, starting with a simmering keyboard line underpinning JuJu's vocals before stopping dead in its tracks before a chorus of (what sounds like) "inside my head and out of my heart, I'm a superhero" that you could see packed venues singing back at them.  There's another series of changes of pace and mood before the song meets its conclusion.  It's complex, fun and a sign of progression from a band that, despite not having played many shows together, is gelling into a formidable outfit that's already got an underground buzz about them that's building. 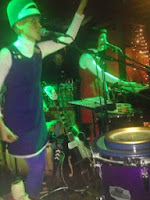 What's also refreshing to see is the love between the two bands who had played together earlier in the year at Dot To Dot in Manchester.  JuJu is at the front dancing along to The Lottery Winners and Thomas is seen mouthing the words to Favourite Flavour later on.  It'd be great if all bands showed mutual respect at shows as the other bands are often the worst offenders for talking at shows.  Towards the end of the set there's a special guest appearance by Louis Barrabas and one of his band on sax who sings the old standard Fly Me To The Moon.

Candy Says’ official website can be found here.  They are also on Twitter.   The free iPhone / iPad app can be downloaded here. Their three singles are available to buy on their Bandcamp page and can be listened to on their Soundcloud page.
Posted by Even The Stars at 20:10