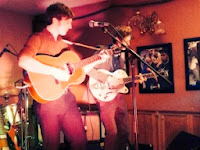 It's been quite a year for new Sheffield band High Hazels, releasing their debut single, Hearts Are Breaking, getting some serious blog coverage and playing their first gigs in London.  To finish off the year before recording an EP early next year, they played their Christmas party at their local The Shakespeare with support from the unfeasibly young The Orielles.


It's not often you can look at a band, imagine their sound and it be absolutely nothing like what you hear.  We get to the Shakespeare early and whilst sampling some of what makes it one of the finer gig / beer venues in the North, are a bit perturbed by the fact there's some kids stood next to us who wouldn't pass the "are you 18?" test, particularly the lad who's wearing a terrible green surf shirt.

We're even more concerned when they get up on the stage.  But then they start playing and something completely unexpected happens.  They sound like a cross between a 60's surf pop band and one of those wonderful guitar bands that made a fuzzy mess of a noise over the top of delicious swooping melodies in the late 80s / early 90s and which all seemed to be signed to 4AD. 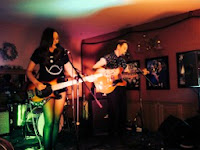 It's not just the melodies though, they're all extremely accomplished musicians.  Vocalist and bass player Esme combines those responsibilities and recalls Kim Deal or Tanya Donelly in their prime.  Their best songs are where she and guitarist Henry alternate vocals, him harmonising when she sings and then the roles being reversed.  Their forthcoming single Hindering Waves may send a tsunami of blog interest their way, such is how it pulls off the trick of sounding rooted in their very obvious influences and yet still contemporary.

It's not just a one-off though, the set is smattered with songs that do just that with enough variety to keep the casual listener as they hold on to a crowd tonight that isn't there to see them.  Guitarist Henry betrays his tender years with riffs and solos that some of his esteemed heroes would be proud of.

Drummer Sid, who was walking around earlier in a Talking Heads t-shirt, holds the songs together in a way drummers used to before they became the butt of many jokes in a band.  They're a frankly astonishing band.  It almost feels condescending to refer back to their age, because they'd still be brilliant if they were the age of many of the bands that the music press and bloggers are wetting their pants about currently.  God knows how good they'll be then. 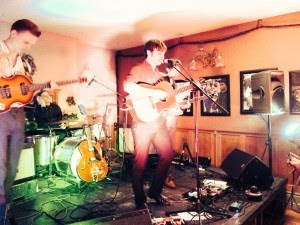 Sheffield is currently undergoing a bit of a musical renaissance.  Fuelled by the success of Arctic Monkeys, Richard Hawley and Reverend and The Makers, there's a posse of new bands catching attention outside of the city - The Sherlocks, Blessa, Section 60 to name a few.  High Hazels are a fine addition to that list.

You can trace their genesis from Richard Hawley through The Crookes, with whom they share a manager and a fine sense of a classic guitar-driven pop song.  Vocalist James has that effortless timeless voice that would draw you in even if he was singing the telephone book and it's accompanied by swirling yet simple melodies, shuffling drumbeats and an eye for a tune that can't be taught which just comes naturally.

This is their last show before they go into the studio to record the follow-up to Hearts Are Breaking and they're in good form between songs cheered on by a hometown crowd. Like The Crookes, you have to question whether they have the wider mainstream appeal to make a breakthrough and they need to be careful not to be labelled as Crookes copyists as they find their feet.

What's good as they establish themselves as a band, particularly away from this partisan crowd, is that there is more than enough of their own personality in these songs to keep them away from that just yet.  Songs like Promenade and Winter Song don't sound like their contemporaries even if they do wear influences on their sleeves still and encore and b-side Five Weirs is so fragile and emotional that you can't help falling for them.

James sums it up perfectly introducing a slow song mid-set, but then countering it by telling his crowd it's got a lot of soul.  High Hazels have that in abundance.

High Hazels released their debut single Hearts Are Breaking late last year and it's available from their website.  They are also on Facebook, Twitter and Soundcloud.

The Orielles are on Facebook and Twitter and you can buy their EP from their website shop (they were previously known as The Oreohs)
Posted by Even The Stars at 19:49

Email ThisBlogThis!Share to TwitterShare to FacebookShare to Pinterest
Labels: High Hazels, The Orielles