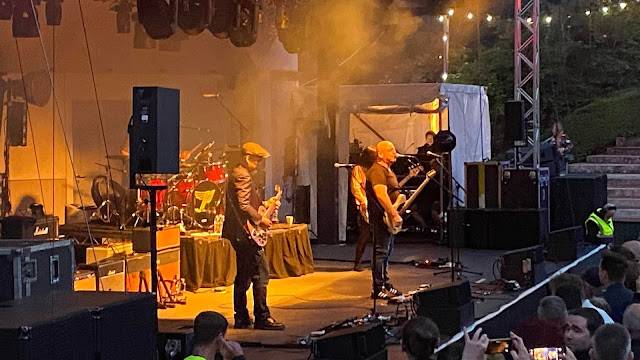 The Kelvingrove Bandstand is a stunning outdoor arena in Glasgow. Tonight’s show is one in a series of fourteen concerts. Billed as The Summer Sessions and featuring acts as diverse as Van Morrison and Belinda Carlisle, as well as local legends such as The Jesus and Mary Chain and Edwin Collins. Ahead of their Bingley festival slots on Sunday, The Pixies have embarked on a short warm up tour of the north (Edinburgh, Glasgow then Newcastle) inviting The Slow Readers Club along too.
The Slow Readers Club are no strangers to the big stage and this week sees them playing venues new to them and opening the show, allowing them to play to new audiences. They relish and positively thrive in the environment. The Wait is a commanding sit-up-and-take-note message to the crowd. The sound is crystal clear and it engages the sizeable audience who have gathered. “We’ve brought some Manchester sunshine with us” announces singer Aaron Starkey as the band fire through an impressive forty five minute set. They’ve such a wealth of material that their set could be double that length. Playing to an almost exclusive Pixies audience support slot though allows the band to showcase their talent and gain new followers. Another cut from The Joy of the Return, All I Hear, follows, featuring a commanding Starkie vocal, pounding drumming from David Whitworth and a storming Jim Ryan bass line.
Kurtis Starkie’s stunning guitar gets a beautiful You Opened Up My Heart underway. The standout track from 2018’s Build A Tower benefits from the neutral crowd as thankfully the “here we f’ing go” chants we often hear from Scottish crowds are gone this evening! You Opened Up My Heart is segued into a magnificent Plant The Seed. The pounding electro of Plant The Seed has never sounded so good and the crowd love it. Fun fact - Plant The Seed was debuted only a mile away at Glasgow’s Stereo some seven years ago. 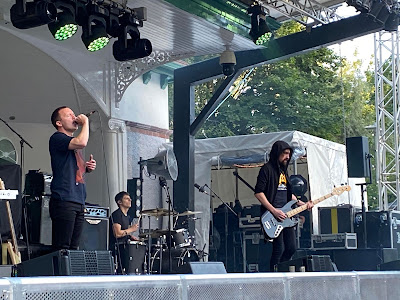 The audience are suitably impressed with each and every tune. “A sombre one for you now” announces Aaron before the band launch into Everything I Own and it feels very much like a headline set given the confidence the band exude from the stage. Everything I Own showcases a different side to the band and is one of two tracks taken from their stunning last album, recorded in lockdown, 91 Days In Isolation aired tonight with The Greatest Escape up next. This is the first chance I’ve had to hear the 91 Days material live and it sounds magnificent.
Old favourite, the northern soul infused Forever In Your Debt follows and sounds as fresh as ever. My most played record of the last decade, I never get tired of hearing it. Forever In Your Debt has it all; Jim’s incredible lead bass, Kurtis’s subtle Marr-esque guitar hooks, David’s tribal drumming and soaring vocals from Aaron. The crowd love it too.
Latest single Tell No Lies is up next and it’s the only clue we get tonight of the new album, which is recorded and ready for release next year. With a strong synth and another dominant bass line, it’s another classic Readers single. The set rounds off in style with three big hitters - I Saw A Ghost, On The TV and a frantic Lunatic - and the audience reaction says it all. A stunning show, delivered as if they were headliners. We must give a shout out and credit to the woman in the Readers 91 Days t-shirt at the back of venue. She sings and dances throughout the entire performance, never missing a beat or spilling a drop.
Glasgow has always been a Pixies stronghold. No night out in the late 80s or early 90s was complete without dancing to Here Comes Your Man. Their 1991 SECC gig was legendary. The band played for twenty minutes before the barriers gave way and the show had to be abandoned. The band initially split in 1993 and that SECC show was never able to be rescheduled. However, everyone who were there that night spoke for years later about how amazing the band were for those twenty minutes.  Tonight’s gig sold out quickly, such is the love for Pixies in Glasgow. There’s a real mix of teenagers, twenty somethings, forty somethings and octogenarians. There’s even a boy about two on his Dad’s shoulders enjoying the marathon show.
Opening with Ed Is Dead, The Pixies are loud! They give it a full 100% from the off. The crowd love every minute. You can feel the admiration and respect for the band in what is for them an intimate gig. There are only two and a half thousand fans here and they could easily have sold that number of tickets again.
Their big hitters such as Bone Machine, Gigantic, Monkey Gone To Heaven, Here Comes Your Man and Velouria all thrown into the set early creating an almost party atmosphere as the sun sets over Glasgow. The delightful Here Comes Your Man sounds as fresh as ever and sees the first singalong of the night. This is probably Pixies poppiest moment. At times, they channel their sound into the same vein as contemporaries, fellow art rockers and legends Sonic Youth and My Bloody Valentine. This is exemplified on tracks like the excellent Gouge Away, one of the ten tracks features on the Doolittle album. 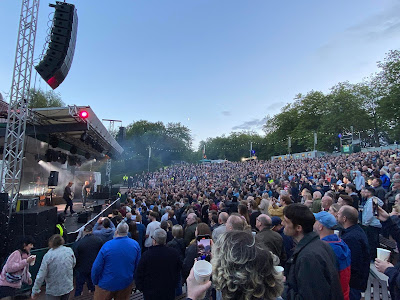 Velouria gets the best reception of the set so far but in truth, every single one of the thirty one songs aired tonight gets a fantastic reception from the knowledgeable and appreciative crowd who worship this band. Paz Lenchantin’s bass often dominates and in addition she takes lead vocals to great effect on Gigantic. Havalina finally slows the pace down a little, showing a softer side to the band and features great vocal interplay between Paz and Black Francis.
He switches to an acoustic guitar for next one, the laid back new one from the forthcoming LP Doggerel, Who Is More Sorry Now? It’s one of four new songs in the set and is followed by another new one Vault of Heaven, features one of Frank’s best vocals. The new material is as equally well received as the classics and I look forward to hearing more come release day in September. The Lord Has Come Back Today is another impressive new one and is reminiscent of Scotland’s finest The Jesus and Mary Chain. Later on in the set, Pixies pay homage to The Mary Chain with a cover of Head On. The classic single is completely reworked and given the distinctive Pixies stamp. It sounds magnificent.
As the light fades, I look around and marvel at the venue. It is like Manchester’s Castlefield Bowl but in miniature. By Pixies standards, this is an intimate show. A beautifully restored bandstand and amphitheater. Even although it’s summer, I’m glad I’ve brought my big coat.
As the set draws to a close, Debaser sees the whole arena come to life and remarkably the band shift it up yet another notch and it feels like a celebration in here.  Furthermore, Where Is My Mind? seems like a religious experience for many in the crowd and they sing every word.
It feels like the band have only been on stage for minutes. It’s over all too soon. An incredible performance. Pixies generated an amazing amount of energy and feedback, putting many younger bands to shame. The band seem humbled by the audience reaction at the end of the night and it’s another Glasgow Pixies show that will live long in the memories.
Pixies official website can be found here.  They are also on Facebook and Twitter.