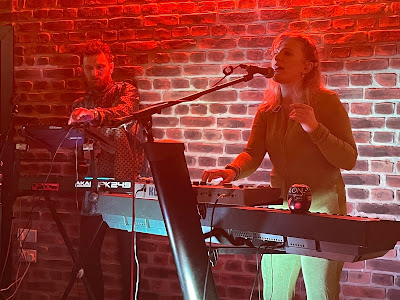 Thursday night saw our first visit to the new venue / bar Bask in Stockport for the launch of Daisy Valentine's Tabula Rasa EP with her performing a headline set supported by acoustic performances from SKIES and The AV Club, both who put on impressive shows despite an audience that felt their conversation was more important than the music.
Bask is a new space situated close to Stockport Railway Station as part of the impressive new development that's trying to regenerate the town. It's primarily a bar, but they've invested in a sound system that is much more than an after-thought and starting with acoustic nights and an in-conversation with Liam Frost in a couple of weeks, they seem serious about bringing another live music space to the town even if many of tonight's audience seemed to be there more to show their face as supporting the headliner than to listen to her or the other bands on the bill even when asked by the artists and at one point during SKIES' set by Daisy's Dad.  Not the venue's fault nor the artist's. 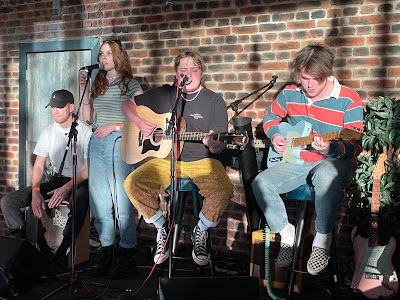 Warrington's The A.V. Club perform an excellent opening set, stripped down from their normal live show, but one that leaves us wanting to see how they'd work in a full-band electric show format. They're at their best when Joe and Freya's vocals combine. The harmonies and coming together of the voices emphasise the classic songwriting style that they've adopted on singles I Think I'm Fallin' and their most recent one VHS Song (which they tell us stands for Very Happy Song) and for those that are listening, that's the immediate impact. Best of all though are a new song called Love Letters that they're modestly unassuming about, with no reason to be so reticent as it's a fine song, and the set-closing single Better Days. It's a pity more weren't actually listening because they might have discovered a new favourite band. 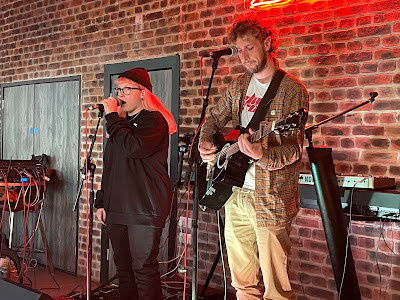 SKIES are next up in an unfamiliar acoustic setting when we're used to their high energy drum, guitar and backing track set, but with Jericho taking acoustic guitar and Alie just using her voice, once again it strips their songs down to their rawest form and makes them even more affecting when (if) you listen to the lyrics, Alie's description of them and you're close enough in the sunlit room to see the expressions on their faces as they deliver them. They mix songs from across their back catalogue from their recent single Deconstruction through to early favourites Green and Pills, fighting against the chatter, until Daisy's Dad intervenes as they're about to cover Florence And The Machine's Free which shuts them up for about five minutes.
It's Daisy's night though and you can tell how much this means to her by her conversation between songs as she explains the meaning behind each of the songs and how you feel that it's music that's got her through lockdown and you sense that even more as she starts to sing and loses herself in the songs whether they be personal about her own experiences and feelings, missing her brother who she co-wrote one of the songs with, or about her friends as when she plays a song that she played first at her best friend's wedding as a surprise. 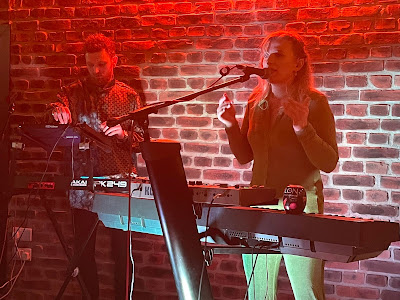 The songs are mainly synthpop in their construction as she's accompanied by Glenn who also acts as a rabble rouser, trying to conduct the audience's response as the songs rise and fall. She starts with an extended instrumental that very much sets the mood and tone for the rest of the set. She plays all four songs from the Tabula Rasa EP, that was released at midnight after the show, with its opening track I Know Why first and its centrepiece It's Not Me It's You finishing off the set to rapturous roars from the crowd. They finally take notice of even her having to ask them to listen rather than chat when she slows the set down for a solo keyboard track half way through before she picks up a guitar for the aforementioned song about her best friend's wedding after introducing him and his wife. The couple of extra songs she plays shows that she's still got more to come too - one called Jailbird is probably the highlight of the set.
Daisy Valentine is on Facebook and Twitter.
SKIES' official website can be found here and they are on Facebook and Twitter. They play Canterbury Smoked And Uncut Festival (13).
The A.V. Club are on Facebook and Twitter.
________________________________
Follow Even The Stars on Twitter at @eventhestarsuk and like our Facebook page for all the latest updates
Posted by Even The Stars at 20:44