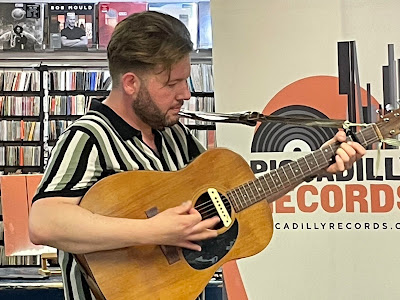 To celebrate the first ever vinyl issue of his second and third albums We Ain't Got No Money Honey But We Got Rain and The Latchkey Kid, Liam Frost played a solo acoustic set at Piccadilly Records on Sunday afternoon featuring tracks from both albums as well as a couple from his debut Show Me How The Spectres Dance.
Best known for his debut record Show Me How The Spectres Dance, released in 2006, Liam Frost has continued to produce some of the finest music ever to come out of Manchester without ever threatening to achieve the stardom that many of his contemporaries on the local scene have done. With Spectres having been reissued on vinyl last year and cracking the vinyl album charts following a successful Tim Burgess Listening Party, the groundwork was laid for his 2009 follow-up We Ain't Got No Money Honey But We Got Rain and 2019's The Latchkey Kid to get a long-awaited vinyl issue which happened last Friday. This Sunday afternoon show with local store Piccadilly Records was part of the launch campaign for the records.
Liam's on good form, taking requests from the audience as he tells us he hasn't planned out a setlist, joking that the guy buying records as he came on wasn't expecting a "sad guy troubadour" but left before he could do his cover of Ace Of Spades, that he used to put flapjacks in his harmonica holder to snack during gigs and that the young women who he'd coopted for some promo shots outside the shop earlier thought he must have been a big shot.
The songs feel starker and more poignant in the bright lights of a record shop, with no amplification, just an acoustic guitar unplugged and a voice. Liam resists the temptation to walk round the shop playing as he suggests he might do when he starts, but with four songs from The Latchkey Kid, two from Spectres and a solitary one from We Ain't Got No Money, he covers all bases. What's telling though is that there's quite a few children in the crowd and they're as enthralled and attentive to him as the rest of us (and we've been at a few of these events where they definitely weren't) - the simplicity of the songs in this format and Liam's voice are intoxicating and demand your attention. The hope is that the re-release of these albums might introduce them to people, because they deserve to be heard and appreciated by a much wider audience.
Liam Frost played Going Steady, Who's Gonna Love You, Held Tightly In Your Fist, The Slow Knife, The City Is At Standstill, Pomona and The Mourners Of St Paul's.
Liam Frost can be found on Facebook, Soundcloud, Youtube and Twitter. His website can be found here.
He plays Stockport Bask (August 21).
________________________________
Follow Even The Stars on Twitter at @eventhestarsuk and like our Facebook page for all the latest updates
Posted by Even The Stars at 21:18