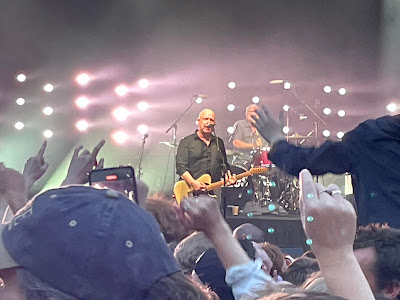 Pixies headlined the latest in the Summer In The City series of gigs in Manchester's Castlefield Bowl on Tuesday night supported by local heroes The Slow Readers Club and Klangstof. A thirty-song set provided a perfect reminder of why they are one of the most important and influential bands of our generation. 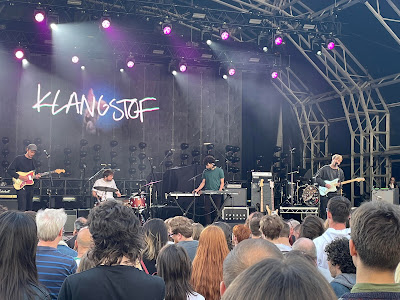 Klangstof open the evening with an enthusiastically received set that's perfect for the unusually warm Manchester summer evening to a growing crowd. Mixing tracks from their two albums - 2016's Close Eyes To Exit and 2020's The Noise You Make Is Silent - as well as new material including the stand-out track Truth that screams future single from the rafters, their high-energy tuneful fusion of electronic and guitar sounds draw an attentive and appreciative audience in.
The Slow Readers Club are from Manchester as they are quick to tell us and this is their second time at Castlefield Bowl having supported James here a few years back and should hold a longer-term ambition of headlining here in their own right given they sold out a triumphant night at the Apollo back in 2018 and have new music on the way. Tonight though is effectively a mini greatest hits set over forty-minutes where they delight their dedicated fanbase, whose shirts are as visible as the headliners. Shouts of READERS reverberate around the bowl as the likes of You Opened Up My Heart, Forever In Your Debt and the final trio of I Saw A Ghost, On The TV and Lunatic are greeted like returning old friends by their own fans whilst simultaneously winning over many new fans as evidenced by the response growing louder with each passing song. 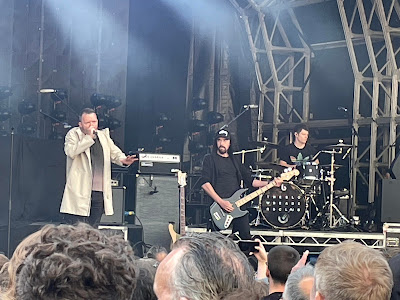 They don't play anything brand new, but three songs come from their last album 91 Days In Isolation and the follow-up single Tell No Lies. The Slow Readers Club have perfectly captured a vibe, they deliver songs that anyone can relate to, find themselves singing along to by the second chorus if they're not cool for school to do such things and there's a feeling of not being alone that comes from music that truly connects even to an audience that isn't wholly theirs. Aaron now looks at home up on the big stage and even though the band seem to be physically distant from each other, their set is tight-knit, powerful and uplifting.
The Slow Readers Club played The Wait, You Opened Up My Heart, Plant The Seed, All I Hear, Everything I Own, The Greatest Escape, Forever In Your Debt, Tell No Lies, I Saw A Ghost, On The TV and Lunatic.
Pixies very much know what their audience are here for. Whilst they're still releasing new material - tonight's set features recent single There's A Moon On from their forthcoming Doggerel album and this year's stand alone single Human Crime - that plenty of bands would kill for, they lean very heavily on their opening trio of releases Come On Pilgrim, Surfer Rosa and Doolittle, with twenty-one songs of the mammoth thirty-song set coming from those alone with a smattering of tracks from the Bossanova and Trompe Le Monde era including their covers of Jesus And Mary Chain's Head On, Neil Young's Winterlong and The Surftones' Cecilia Ann, almost completely ignoring their post-2004 reformation output other than Beneath The Eyrie's St Nazaire. 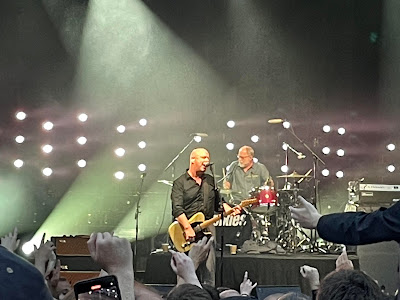 They reel off classic after classic track to an audience that grew up on these records, whether it be the elder ones amongst us who experienced them first time round or those whose journey of musical discovery has brought them to Pixies, the band that influenced more than any guitar music that's been released since the late 1980s. The front half of the bowl starts bouncing at the start of Cactus and doesn't stop until a sea of arms and audience harmonies bid farewell an hour and a half later at the end of Where Is My Mind?
Doolittle's trio of Here Comes Your Man, Monkey Gone To Heaven and Debaser and Gigantic, with Paz taking lead vocals,are sung with the gusto reserved for the generation-defining songs which they are. Frank sounds better vocally than he has for a long long time, his screams controlled and powerful, barely pausing for breath between songs as they run one into the next. Exceptionally tight, held together by the power and drive of David's drumming, an often overlooked but absolutely critical element of those three albums.
They say practically nothing throughout, as has become par for the course at their shows, preferring the focus to be on the music. Lighting is simple, there's no big stage show or gestures, but Pixies simply don't need them.
Pixies played Cactus, Here Comes Your Man, Nimrod's Son, Brick Is Red, Break My Body, Mr Grieves, The Holiday Song, Vamos, Winterlong, Gouge Away, Wave Of Mutilation, Broken Face, Crackity Jones, Isla De Encanta, There's A Moon On, Tame, Caribou, Human Crime, Cecilia Ann, St Nazaire, Rock Music, Monkey Gone To Heaven, Bone Machine, Gigantic, U-Mass, Debaser, Head On, Planet Of Sound, Hey and Where Is My Mind?
Pixies official website can be found here.  They are also on Facebook and Twitter.