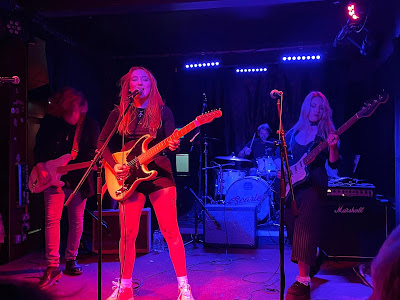 Scarlet kicked off their UK tour at Manchester's Night And Day Cafe on Thursday night. Seven years on since their debut EP, they still have the passion to deliver an energetic ten-song set featuring a mix of older material and new songs.

That Scarlet are still here is a triumph of the will of lead singer Jessie and guitarist Adam who still form the core of the band that now has its strongest line-up with Laura on bass and Cai on drums. You sense from their social media a frustration with the need to have to do more than just write and play music, which should be the sole reason for forming a band, in order to achieve whatever success is these days, but the minute they get on stage, fresh from interacting with their fans at the merch stand rather than hiding away in the green room, then you see them really come to life. Their set feels like a genuine labour of love, the thing that they'd rather be doing above anything and everything else, and that transmits to the crowd. There's no trying to be cool, just a joyous energy that emits from the four of them, laughing off guitar string issues, and letting loose and sharing their love with an audience that responds rapturously to them. 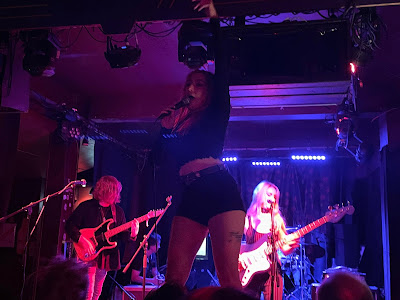 The songs from their debut album Effigy - Heavy, Alone, Your Control, Who Left The Iron On and Nothing - have new life and power breathed into them and a sense of joy where once Scarlet almost felt like they were trying too hard rather than enjoying the moment and they're a much better band for that. Jessie leaves the stage during their next single In And Out to take on water, but also to allow Adam and Laura their moment to live out their rock star fantasies with enough space to do so after earlier having mounted the barrier at the front to make sure those at the back can see and hear her. The newer songs - the aforementioned In And Out and their last single Fear in particular - demonstrate that even seven years in they're getting stronger and writing their best material. The mechanics of the industry might mean they won't achieve what they want to commercially without a stroke of fate intervening as it does at some point for all bands that break, but they're going to enjoy themselves trying and ensure that those in the audience share that with them.
Scarlet played Heavy, Alone, Friends, Your Control, Who Left The Iron On, Wrong Way, Bring Me Down, Nothing, In And Out and Fear.
Scarlet's website can be found here and they are on Facebook and Twitter. They play Birmingham Sunflower Lounge (July 22), Stockton NE Volume Music Bar (23), Sheffield Tramlines Fringe (24), London The Grace (27), Guildford Star Inn (28), Northampton The Black Prince (30), Chester Live Rooms (October 23), Newcastle Cluny (25), Glasgow Stereo (26), York Fulford Arms (27) and London The Black Heart (28)
________________________________
Follow Even The Stars on Twitter at @eventhestarsuk and like our Facebook page for all the latest updates
Posted by Even The Stars at 08:00