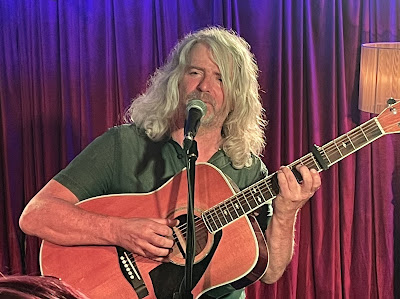 John Bramwell's never-ending tour of some of the locations that are often left off other artist tour schedules arrived in Atherton for a return visit on Wednesday night to one of Greater Manchester's hidden gems The Snug. A career-spanning set liberally sprinkled with wit and often self-deprecating humour delighted an attentive appreciative audience.
It's our first visit to The Snug in Atherton, a 100 capacity cafe bar turned venue in the evenings, that's trying to buck the citycentrification of the region's music industry. With excellent transport links to both Manchester and Wigan by bus and train after shows have finished, it's in a perfect location for emerging artists in the area as well as more established acts looking to play somewhere a little different. John Bramwell, no stranger to grander and bigger venues, is a huge fan of the place, both in terms of the set-up of the sound system, that has clearly been well planned out and would put some of the city centre's more established venues to shame, and the team working there are welcoming and friendly. If you're a lover of live music in Greater Manchester, it's an essential place to visit alongside other independents who are striving to bring it to all corners of the ten boroughs and not just the city centre.
Not even the trials and tribulations of the M6 being closed and taking a long detour arriving only to be able to do a cursory soundcheck in front of part of the audience is going to ruin John's mood or the atmosphere of the gig, which has to be one of most friendly and welcoming we've witnessed in a long time. As the set progresses John starts to take requests from the audience, good-naturedly turning down some of the more obscure ones like Stop and Coincidence by telling us he wouldn't be able to remember them in full because he hasn't played them in so long which adds a real communal feel to the show. He plays Northern Skies from one particularly vocal request half way through the set then tells us at the end of it that he normally plays it last before later conceding to further shouts and reprising the singalong part of it. 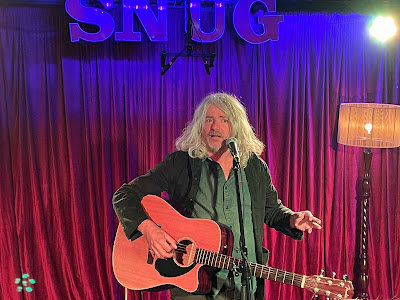 The set is heavily based around his I Am Kloot catalogue even before the requests and touches most points of their impressive body of work with a couple of songs from his first solo album Leave Alone The Empty Spaces - the poignant Time's Arrow and the bruised romanticism of Meet Me At The Station and Sat Beneath The Lightning Tree. After the latter he gives insight as to why he doesn't play any of his newest material - recorded with his new band The Full Harmonic Convergence - because he feels that they need the band to make them whole. Whether that's true or not, it certainly doesn't apply to his earlier work and that can be said without denigrating the contribution of the other members of I Am Kloot - it's simply down to the timeless and undeniable quality of the songwriting. The gorgeous The Same Deep Water As Me is every bit as heartbreakingly raw and affecting with just an acoustic guitar as it is with the haunting strings and french horn of the recorded version, whilst the tension in The Moon Is A Blind Eye and the revelations of I Still Do feel more poignant and hit home harder stripped down.
There's a reverential silence whilst John is playing, in contrast to the two-way interactions between songs that fuel and ignite John. There's plenty of his favourite old jokes that those who've seen him before know the punchlines too but still find amusing because of who is telling them and how they're told, but plenty of off-the-cuff one-line responses to the audience too. He commends people on their singing in parts of songs where audience participation is encouraged (Northern Skies, the accordion solo of To The Brink and Proof) and you very much sense he's enjoying the evening as much as the rest of us. He talks of preferring these smaller shows to the big ones in places like The Ritz and Cadogan Hall and how when he played big shows with Kloot that he'd be so tense that it would transmit to the audience and he wouldn't enjoy it. Here it's relaxed and carefree and that makes the music sound even more beautiful and impactful. It's a privilege to see one of the country's finest songwriters in a venue that's dedicated to championing live music at the grass seed and root level - a perfect combination for a perfect evening.
The Snug's website can be found here and they are on Facebook and Twitter.  The venue is one of nine that the Music Venue Trust's initiative to purchase grassroots music venue's leases to help support and nurture them is intended to help.  More details can be found on the Own Our Venues website and crowdfunder.

He played Bigger Wheels, Time's Arrow, Mouth On Me, No Fear Of Falling, Black And Blue, I Believe, The Brink, Over My Shoulder, Meet Me At The Station, The Same Deep Water As Me, From Your Favourite Sky, Astray, The Moon Is A Blind Eye, I Still Do, Northern Skies, Sat Beneath The Lightning Tree, Twist, Ferris Wheels, Masquerade, Proof, part of a new song written this week, Blackbird and Northern Skies (reprise).

Unofficial updates are also available at @iamklootclub on Twitter.
He plays solo shows at Chester Alexander's (August 4) and Manchester The Yard (13) before supporting The Proclaimers on the English dates of their UK tour through October and November.
________________________________