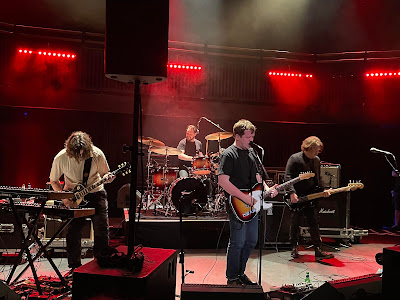 Saturday saw the second day of the Right To Roam Festival around four venues in Bolton, a brave festival that is attempting to bring live music back to the streets of a town that's had many of its live venues shut down over the years. We caught four bands - Cowtown, The Empty Page, The Jade Assembly and Ist Ist - across two of the venues.
Right To Roam has an impressive ethos - trying to bring established or in the process of becoming established bands to a town that's off limits for most touring bands these days and mixing them with some of the very best local talent, both young and older. It faces many challenges - a walk between venues saw us hear Oasis blasting out of three different bars being one of them. New music thrives in places where people champion it and the Right To Roam team, along with the likes of Rockit Bolton who provide many of the local bands on the other stages, are at the forefront of fighting that uphill battle here. They do things properly - the festival is well-organised and the sound set-ups in the two venues we visited excellent. We'd have loved to have seen more of what was to offer, but being in the middle of a house move meant we could only attend part of the Saturday evening. 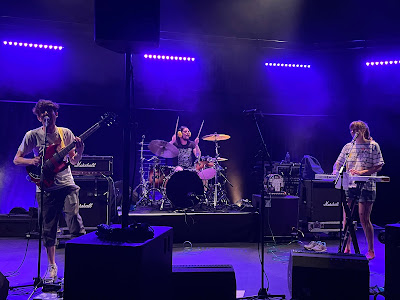 Cowtown are the first band we see at the Octagon's main theatre. The Leeds three-piece have been furrowing their own path for many years now, joking that they've played Bolton "about seventy times" and   still retain a fiercely independent spirit. Alternating vocals between Johnny and Hilary, their songs are full-on assaults on the aural senses that are often gone before they've started, but which, even for a seated audience, set the pulses racing.  David the drummer sat at the back controls everything in a whirlwind of arms that provide the thrill-a-minute beats that propel them forward. Older songs like Buggin Out, Monotone Face, Emojicore and Castle Greyscale nestle alongside newer ones in a half-hour set that has around a dozen songs in it. We're too busy enjoying them to count. 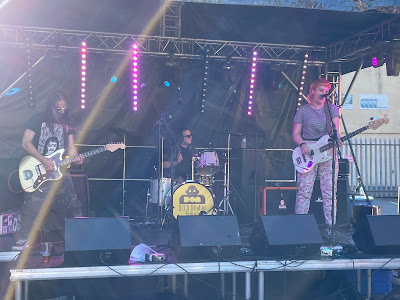 We then leg it to an industrial estate on the outskirts of town to the Northern Monkey Brewing Company's stage for The Empty Page. They play a shorter set than we expected, but Kelly explains that their drummer was unable to play so they drafted in Luke at the last moment to replace him - we wouldn't have noticed otherwise. Songs like Level Sedentary, Life Is A Wave and When The Cloud Explodes may be about some of the dark places Kelly tells us about in between as she reminisces about shit night outs in Bolton in the 1990s, but in the bright Bolton sunshine that means we can hardly see them without squinting they still make perfect sense and they're delivered with genuine energy and passion, living them out in front of us. 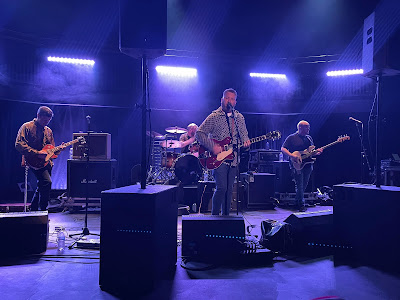 We're back in the Octagon next for the unassuming hometown heroes The Jade Assembly who are playing in front of a partisan crowd who front man John seems to know all of by name and postcode. Their songs depict life in northern towns like Bolton and it's no surprise that they connect with the audience on the likes of Take Me Home, Nothing Changes and Colossal. They're honest, open and free of bluster and pretence, something that may well have held them back further afield, but here they're loved. One look around at faces singing these songs with them, eyes closed, tells you that they are amongst their own here. They finish with an encore cover of Come Together that's pretty faithful to the original other than an impressive solo where guitarist Gareth keeps his eyes on his fretboard throughout.
Ist Ist's trajectory now seems to be on a steeply upward one. On the back of some well-received festival shows in Belgium and The Netherlands, where they've accumulated a following such that they've sold out venues months in advance that established 6 Music bands are struggling to fill, they're full of assured confidence as they deliver a forty-minute set of ten songs from their two albums Architecture and The Art Of Lying as well as showcasing a couple from their as-yet-untitled third album. 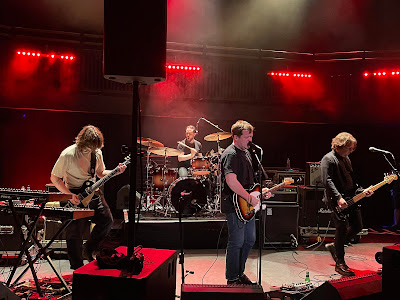 The simple lights and powerful sound system in the Octagon brings Ist Ist's strengths into real focus, their performance is ferocious, threatening to obliterate anyone who gets too close on their opener Stamp You Out, a new song but a reminder of the brutal power of their very earliest work. Time constraints mean that we do just get the full-on foot-to-the-floor Ist Ist experience, ten songs that would make up the bones of an impressive Best Of record with the likes of Fat Cats Drown In Milk, Watching You Watching Me, It Stops Where It Starts, Emily, Extreme Greed and You're Mine. A new song Mary In The Black And White Room shows them still keen though to push their creative boundaries, it's ambitious and expansive in its vision whilst retaining the Ist Ist DNA at its core. They finish with a seven minute Slowly We Escape that builds and builds before exploding into violent life, the four of them letting loose as if this was the last time they'd ever get to do this.

Ist Ist are on Facebook and Twitter. Their albums including the forthcoming Live In Manchester release can be ordered via their website. Digital versions of their previous limited edition releases and a number of live field recordings are available to download from their Bandcamp.