One of the things that separates James from other bands is that we, the audience, never ever know what we are going to get when we go and see them. To celebrate their 40th year, James announced two special gigs; last month’s Edinburgh show was a celebration of a Barrowland "Best Of" era gig (from 1998) and then at the wonderful Castlefield Bowl tonight. We  knew exactly what we were going to get - twenty-two songs from the massive 1992 Alton Towers show that made for a curious evening. The band pulled out all the stops, truly testing themselves by revisiting some songs they haven’t played in decades.  What followed was a truly stunning performance.

An amazing Johnny Yen got the show underway. Always a highlight of a set, the band improvise, reminding us why they are such an important band. Saul’s violin and Andy’s trumpet bring so much to the performance, no more so than on this one. Tim then talks about the Alton Towers set, mentioning that they played three b-sides before launching into the stripped back opening of America. As the song progresses, the tempo lifts and the sound benefits from having nine musicians on stage. Factory Records singles What’s The World and Hymn From A Village follow. The crowd around me sing along to every word. The former benefits from the addition of Debbie accompanying Dave on drums  Hymn From A Village is fast and full of energy. Despite being forty years old, these songs are as fresh as ever. Hymn From A Village is a real celebration.

Heavens is driven along by a storming Jim Glennie bass line and Dave’s furious drumming. There are moments throughout Heavens where the metaphorical musical baton gets passed around and several members take turns to lead. The lead single from the time of Alton Towers, Seven, is almost an obscurity; the fourth single from the album of the same name, it perhaps didn’t get the credit or attention it should have received when it was released. It’s one of the most overlooked singles in the back catalogue but sounds truly magnificent

Live A Love of Life, another cut from the Seven album starts with an extended instrumental opening before Tim comes in. There’s an extended middle section too, with yet more improvisation. When Tim was being interviewed back in the late 80s and early 90s, he would always talk about the band taking risks, improvisation, stretching the band, stretching the audience and trying to better their last performance in that town the last time they were there. This evening, they do all of that. It’s interesting that having a pre-determined set list actually brings these things to the fore.

God Only Knows from 1990’s Gold Mother is like a distant cousin of Johnny Yen, where, in the middle, the band fade into the background, allowing Tim to ad lib his way through before everyone comes together again for a rousing finish.

Stripmining remains true to the recorded version, with Adrian’s subtle, delicate guitar this time taking centre stage. The Refrain is stunningly beautiful and augmented by some fine brass from Andy and Saul’s violin. Their contributions to these songs can’t be overstated. I hear the woman next to me say that she sings Stripmining to her kids. Written and recorded before he joined the band, Saul is full of praise for Stripmining, saying “We will all die but these songs will live on” once it concludes.

Lose Control is completely reworked and almost unrecognisable, thanks to the stunning vocals from Chloe. Incredible. When Say Something was played at Alton Towers thirty years ago, it was still very much in its infancy, one of the newest songs in the set and unrecorded. Tonight’s powerful version is very different to that early outing.

Goalies Ball is another of their legendary b-sides to get an outing tonight. It doesn’t seem to capture the audience’s attention as much as America but is nonetheless powerful with Tim’s simple, repetitive vocal. It’s followed by rare gem Maria’s Party which was played in the set regularly from 1992 until 1994.  Maria’s Party is a classic pop song that other bands would have released this as a single but not James; appearing instead in a radically different guise on experimental album Wah Wah. Tim comments that tonight is nothing like Alton Towers before launching into Next Lover, which seems to have a similar feel to Maria’s Party, and might explain why the conventional version was never released. 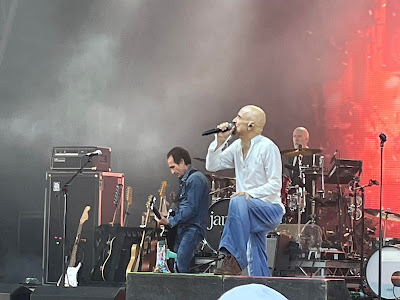 Gold Mother, the title track from the band’s third studio LP, seems to have gained stature in recent years and is much more celebrated now than on release. Tim dedicates it to all the women in the audience in light of the  recent shocking ruling from the USA. The lead single from Gold Mother, and the band’s first top 40 hit, How Was It For You? is another tune that’s been completely reworked - slowed down slightly and stripped of its anthemic status; instead it is delivered semi-acoustically.

The whole Castlefield audience join Tim on the opening of Born of Frustration, and is another song being slightly stripped back. Initially, at least. As the song motors on, Andy’s trumpet helps lift it up a few gears.

The still unreleased (in studio form) Stutter dates from the very earliest days of James and has always been a big fan favourite. Indeed, the fan next to me even ‘sings’ Jim’s opening baseline. Stutter is a song to benefit from the ample drumming provided from almost everyone on stage and the ending is once again improvised. Perhaps never releasing a studio version has kept the song fresh for both audience and band.

“If you’ve been following the set list, you’ll know we only have a few more left for you” Tim announces to comedic boos from many in the crowd. “They’re bangers” he adds before Mark launches into Come Home. Adrian’s wah-wah pedal allows him to craft out some funky solos. Come Home is a rousing way to finish the set off and the band finally pause for breath for a few minutes before returning with Ring The Bells and another crowd singalong.

Without announcement or fanfare, the band launch into Sit Down. Mark’s keyboards are high in the mix however the audience threaten to drown the band out. For me, Sit Down is crying out for Andy’s trumpet. Sit Down is followed tonight by the single that followed (on re-release) it in 1991, Sound. Releasing Sound as the follow up to Sit Down and the pre-curser for the Seven album was very much a James thing to do at the time. A highlight of many a live show, this time Andy’s trumpet is the standout instrument as once again the band improvise. Another uplifting experience.

And. That was it. The Alton Towers set in full. But, the band aren’t finished yet. They don’t want to leave the stage. “Shall we cheat?” announces Tim as we are treated to some post 1992 tracks. Laid gets the ball rolling. I was listening to an old radio session the band did for the late great Sean Hughes when Tim said Laid was thrown away only for Brian Eno to go raking through the famous James bin to rescue it. The crowd love it and it’s another of those celebratory moments. Although tonight is very much a celebration, as it should be, the band don’t just go through the motions.

Famously described by the band themselves as James-by-numbers, Waltzing Along has never sounded so good and is perfect for this evening before we are treated to Beautiful Beaches from the latest album. It fits in perfectly, showing the band have maintained their skills as master song writers. Getting Away With It finally brings the marathon set to a close to a resounding cheer from the crowd.

Apparently the band were nervous about tonight’s show. However, they are having just as much fun up there as the audience and they delivered a remarkable show.  There’s an incredible amount of energy on stage and perhaps it is worth the band revisiting this approach again. Bath Moles Club ‘88 anyone?