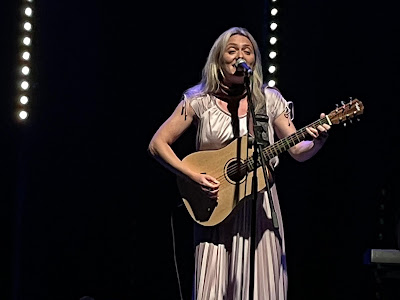 Little Sparrow headlined the first night of Sale Waterside's fifth Refract Festival playing a fifty-minute set accompanied by Robbie Cavanagh and Robin Dewhurst to a cabaret-seating set up in the venue's main theatre on Thursday night.
Little Sparrow gigs are a rare treat these days; they come few and far between and each one of them becomes a special occasion in its own right given the rotating band of musicians that accompany Katie (Little Sparrow) whenever and wherever she plays. Tonight it's Robbie Cavanagh on acoustic guitar and Robin Dewhurst on keys, giving the songs, primarily taken from her debut album Wishing Tree, a new lease of life in beautiful surroundings to an attentive audience, many of whom will be seeing her for the first time based on her asking us if we had.
The Waterside's theatre is a perfect venue, the cabaret seating an inspired choice of layout because it draws the attention to the stage and avoids the type of chatter from a small minority that can often ruin intimate shows, not that anyone should be stupid enough to talk over this. Robbie and Robin are accomplished musicians in their own right and they allow the inherent strength and depth in the songwriting that lies at the core of the likes of Polly, By My Side, Wishing Tree and the set-ending Struck Gold to shine through and for Katie's show-stopping voice to take centre stage. The magic in these songs is that they can be played with any band set-up, or completely solo, and still have the same impact and that's testament to their genuine quality and the intensity of the performance. Her and Robin's cover of Baggy Trousers demonstrates it's a skill that isn't just limited to her own songs. There's plenty of between song chat as well, Katie joking about her being told to write songs that are more commercial rather than the animal fixations that sit withing some of them. However, it's the likes of Corner Of The Room (a spider looking at the humans from their web), Hunted (a bear falling in love with a human) or the animal-mask video to Wishing Tree that gives these tales an edge that lifts them out of the traditional singer-songwriter into their own space. She jokes that I Found A Way isn't about stalking as she charms the audience with her engaging personality and warmth.  The set finishes with Struck Gold, a wonderful unadulterated love song about finding the one that accepts you despite your own reservations about yourself that really deserves the biggest audience it can find.
With a second album on the way, although the trials of being an independent artist and having a real life outside of her art means it's been coming a long time, and an intimate show at the Portico Library on September 10th (tickets), it feels like things might be starting to move again in the right direction. Regardless Little Sparrow remains one of Manchester's real underground treasures, a musician who will enchant, delight and surprise you in equal measure.