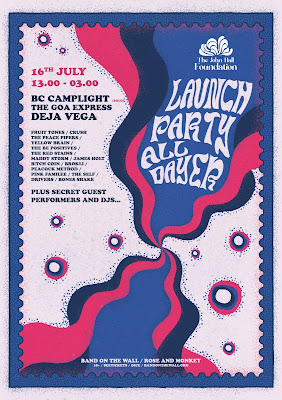 John Hall was one of the most recognisable faces on the Manchester music scene, an omnipresent champion of new bands, unwavering in his support of those who got up on stage to perform and a will to only see the positive in artists. We sadly lost this magnificent man and friend last year to cancer, but before he passed he set up the John Hall Foundation to support the creation of safe working and rehearsal spaces for musicians in Manchester so that his legacy would never be forgotten, not that anyone who'd ever crossed his path would be able to forget him. Across two stages at Band On The Wall and the Rose And Monkey, artists and friends came together to raise funds and pay tribute on Saturday to a one-of-a-kind man whose loss has made the city's music scene a far poorer place. 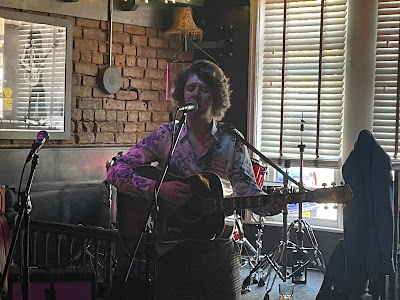 James Holt opens the launch with a solo acoustic set in the Rose And Monkey (well, Django the dog adds barks to the first couple of songs if we're being technically correct) to a small but attentive audience. Playing favourites such as The Wedding, Come Out To Play and Make My Day as well as covering Fleetwood Mac's Everywhere and a new song called Write You A Song before finishing aptly on Whatever Happened With John? with the Smashed Hits John Hall mosaic overlooking one of his most loved songwriters, James demonstrated once again his impeccable musicianship and compelling songwriting skills. We reckon the young man is too talented to be famous, if that makes any sense at all. 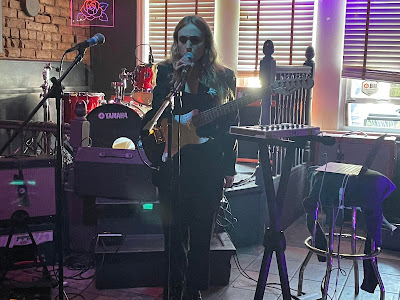 Next up is Maddy Storm, another artist that John championed vigorously, as if he knew any other way, from the very start. Her voyage of self-discovery as an artist has been an interesting one to follow. Today's set has her playing live guitar (with a dodgy strap that provides a couple of comedy moments between songs) mixed by keys and backing tracks but the real attention is drawn to her showstopping voice, particularly its ability to soar to the highest notes. Her set covers many of her singles - Mattress, Last Resort, Sleep Deprived, Surrealist Dinner Party, Dizzying Heights - before finishing on her current single Spit It Out which is taken from her forthcoming EP. Its final song, Natural Disaster, is also revealed and sounds like her best work to date. 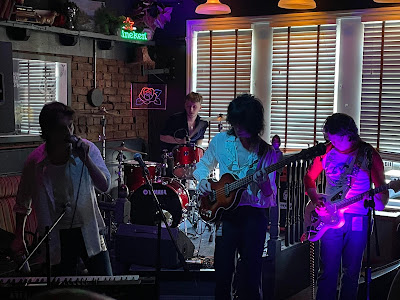 Peacock Method feature members of Crimsons, one of Mr Hall's favourite sets of sons, and their set is full of songs with loose fluid grooves that feel perfect for a late warm Saturday afternoon and they get a very strong response from a crowd that's already filled the intimate capacity of the Rose And Monkey. They introduce themselves as about to play a "bang average set" but they're far better than that of course. Singles Slowly and I Don't Mind are a good starting point - they described one of them as funky, but there's more depth to them than a solitary word description as they evidence on their final track Fazed which sees Adam seated at his keys for a beautiful lament to a lost friend that feels particularly apt on today of all days. 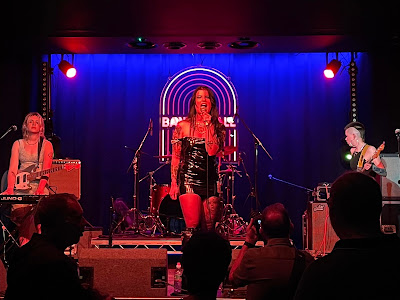 "We're the most hated band in Manchester" Natalie tells us at the end of The Red Stains first song Cashing Out in Band On The Wall. They're certainly a band you won't find yourself sitting on the fence about. You'll either love them for their don't give a fuck, bold, uncompromising stance on transphobia (Fluid is a big two fingers to the closed of mind), objectification of women (debut single Mannequin) and less seriously the state of Manchester's transport system (Jump The Met) or hate them because they refuse to conform, still give the impression that they're on verge of impending implosion and Natalie doesn't sing like the latest X-Factor wannabe. The addition of Amber, the latest fourth member of the band, playing guitar has fleshed the songs out, given them more structure and solidity and makes everything feel more targeted and together. John Hall never got to see them sadly but he'd have loved them. 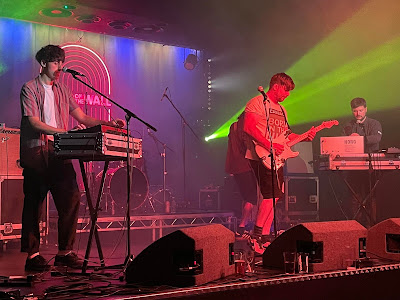 Yellow Brain might be familiar to readers of the blog under their former guise as Afghan Sand Gang and whilst the name changed, their sound is very much based around synth heavy grooves rather than traditional song structures and you get drawn into them as the set progress and they go down a storm with a crowd that very much connects with what they're trying to achieve. The six-song set is split 50/50 new and old, their debut EP's Descension and Scribe plus single Fast Talk rub shoulders with the new of Fall, Scribe and their final song Hyenas which hopefully means new material is on the way from a band that's gone two years without a release. 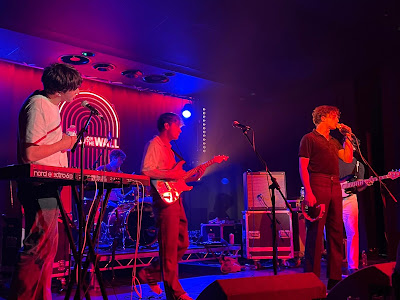 The Goa Express might not hail from Manchester, but the venues within walking distance of Band On The Wall formed a vital part of their development as a band and the gathering of a following in Manchester, usually with John at the front camera in hand to capture it, that's mostly here to watch them tonight. They've now grown to the point that this stage feels like the perfect home for them rather than the dimly lit basements and back rooms and their eleven-song set feels like a debut album ready to drop. Singles The Day, Overpass and Second Time are held back towards the end of the set that builds to that conclusion, growing in intensity, at its most powerful when their vocals combine and add punch to the infectious hooklines that draw you in. 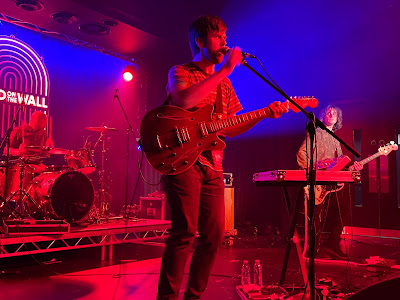 Déjà Vega were a band very close to John's heart back in the day when they seemed to play somewhere within spitting distance of here every couple of weeks. They always had the ferocious intensity of their current live show even back then for those who saw them as they fought to establish themselves and their success now is testament in part to the support of the underground music network in Manchester, of which John was an integral part, which makes them a fitting headliner for an event to support a foundation that will be there to provide backing to the next generation of Déjà Vegas coming through.
They're now fully accustomed to bigger stages like Band On The Wall whose sound system must be considered one of the best, if not the best in town, and tailor made for the blistering power that the trio unleash on a suspecting audience as they shake the flagging crowd, many who have been on their feet for eleven hours between the venues, violently back into life with a selection of tracks from their self-titled debut and this year's follow-up Personal Hell.
Amongst the noise and the explosion of power though, there's detail and subtlety, whether it be in the punching driving drumming of Tom that you'd pay to watch on its own, Mike's understated but essential bass lines and finally in Jack's man-possessed front man onslaught, through guitars, keys, effects pedals and a vocal whose range often gets overlooked. You expect them to finish on The Test yet you never quite know where the song is going to take them as they reserve the last fifteen minutes of the set for that journey that sees Jack out in the crowd, lifted triumphantly up before being deposited back on stage before leaving to an echo of looped vocals. They may have been surrounded by friends tonight, but Déjà Vega never fail to astound.

Déjà Vega are on Facebook and Twitter. Personal Hell is out digitally now with vinyl preorders available on their store. Stream on Spotify here.