TRACK OF THE DAY : SKIES - Deconstruction 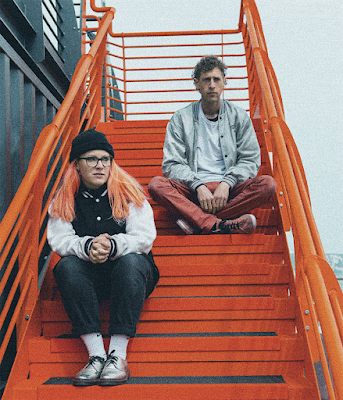 SKIES today release Deconstruction, their first new material since last year's It's Not The End Of The World EP. Full of their distinctive hooks and pulsating beats the single will delight their loyal army of fans whose participation in garden shows as lockdown eased helped to fund the recording as well as hopefully win them new admirers.
Alie explains the meaning behind the song - "Lyrically it’s quite a subconscious song. The song feels like remembering a dream and its meaning spans relationships, relationship with yourself, relationship with the past and trying to find freedom from patterns and loops."
SKIES are Alie (guitars / vocals) and Jericho (drums / vocals) and they've released four EPs since their 2015 debut If You Feel Like It, following it with 2017's We Fear Change, 2018's X and 2021's It's Not The End Of The World as well as supporting the likes of The Slow Readers Club on national tours.
SKIES' official website can be found here and they are on Facebook and Twitter.
They play Folkestone Open Quarter Festival (July 3), Kendal Calling (31), Orpington Priory Music Live (August 6) and Canterbury Smoked And Uncut Festival (13).
________________________________
Follow Even The Stars on Twitter at @eventhestarsuk and like our Facebook page for all the latest updates
Posted by Even The Stars at 07:30