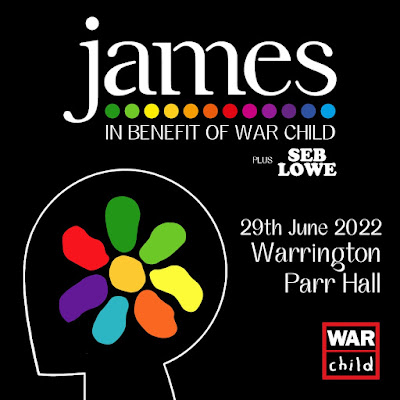 James warmed up for their Castlefield Bowl Alton Towers 30th anniversary show on Saturday with an intimate warm-up show for War Child at Warrington Parr Hall. Revisiting rarely-played songs from that momentous 1992 show as well as more recent tracks . Support came from up-and-coming Seb Lowe.
For those familiar with Seb Lowe's releases to date - his quick-fire double EPs Half Decent and The Other Half - you might be forgiven for pigeonholing him, but the live experience reveals an artist who has the potential to become a spokesperson for a disaffected generation. With a five-piece band behind him the likes of Kill Him He's A Socialist and Iphone are still full of the brimming bile and disdain for the look-at-me and self-first culture that is poisoning society but have been expanded to fill this room and the ones that Seb is going to be packing out under his own name in the not-too-distant future. Supremely confident in his own ability and with a controlled targeted anger in his lyrics, a cheeky smile, some unreleased songs that already show a progression and development in his songwriting craft and a voice that projects his message, he's going to be a very big deal indeed.
James have a real dislike of the word heritage. It's a word used to condemn bands of their vintage en masse and with a majority of them the intent of the insult is well-founded, bands trotting off anodine diluted versions of the songs that made them relevant in the heady days of Britpop for their fifteen minutes of fame. James have always taken a different course, their Alton Towers show, broadcast live on Radio 1 with an audience of 30,000 present at the adventure park, forms the basis for their one-night only show in Manchester on Saturday where they will play all the songs from that gig (in a different order of course).
Tonight's War Child benefit show is a de facto warm-up for that and hence we're treated to a James setlist you're unlikely to see the likes of again - rare catalogue gems like Strip-Mine, b-side Goalies Ball ("but it's one of the best b-sides ever" Tim uses as mock justification, Maria's Party, Next Lover, Stutter (played as far back as 1982, but never released in studio form) sit alongside tracks from their All The Colours Of You album from last year which they insist steadfastly on playing and which don't sit out of place against anything in their back catalogue. There's a few bones thrown to the greatest hits fans with Waltzing Along, Tomorrow and Getting Away With It (All Messed Up) plus an audience-chosen Say Something at the end. It's a fitting appropriate choice given that Say Something was played as an unknown song at Alton Towers, a brave typical James move, but giving the truth to the lie that bands shouldn't play new songs, because every favourite song is a new song at some point.
For a band forty years into their existence there's an energy and passion that younger bands wish they could bottle. The interactions between them, many subtle and easily missed, add to the magic. Three of their very earliest songs - What's The World, Hymn From A Village and Stutter show absolutely no signs of ageing. Saul Chloe, Andy and Debbie add magic and variety by constantly switching instruments that allows these songs to flourish and evolve and constantly challenge both the band and the audience. The vocals interaction between Tim and Chloe breathe new life into the likes of Lose Control and Gold Mother, which is preceded by an impassioned defence by Tim of women's rights to choose exactly what they do with their bodies and that men have no right to dictate it.
There is absolutely nothing more magical than a gig by a band living in the moment and flying by the seat of their pants surrounded by wonderful beautiful people, some of who are friends, some complete strangers. Phone in pocket throughout, every next song a surprise, James gigs have always been unique and special, but even by their own standards there was something about this one that made it even more so.
James played Live A Love Of Life, Isabella, All The Colours Of You / Many Faces, Hymn From A Village, Maria's Party, Seven, Tomorrow, Stripmining, Next Lover, God Only Knows, What's The World, Goalies Ball, Lose Control, Beautiful Beaches, Waltzing Along, Stutter, Sound, Gold Mother, How Was It For You and Getting Away With It (All Messed Up).