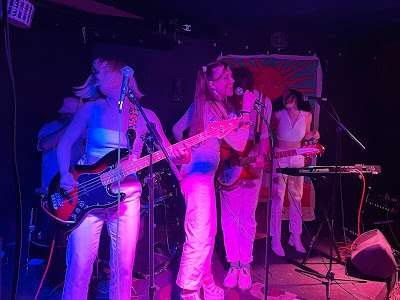 Spud Cannon brought their short UK tour to a close on Tuesday night in the intimate surroundings of The Peer Hat in Manchester. With three albums already under their belt they delivered a fourteen song forty five minute set of three minute gems that touched all bases to an audience that they had eating out the palms of their hands by the end of the night. 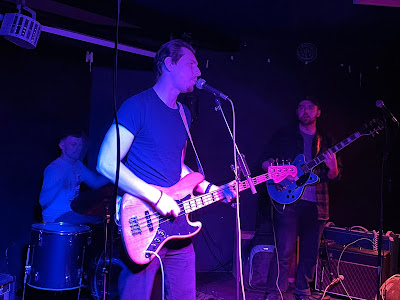 Concrete Club open the evening with an impressive five song set even though they’re missing their bassist who they claim is stuck in a Paraguayan jail. Their songs are built around powerful driving riffs and a tight rhythm section and Tom is a particular stand out early in the set. They tell us they’ve got a couple of songs coming out soon which would explain why there’s not a great deal out there about them. They have brought an unusually large following for a Tuesday night opening act who are very appreciative of their set. They finish with a long drawn out Psycho Funky Music, which they describe as their manifesto and it’s a bold multi-headed songs that travels through many phases and shows a mastery of different pacing of a song without ever losing track. 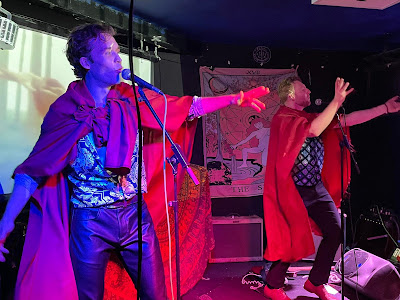 Junk Spirits are pretty insistent that they’re everyone’s new favourite band. They start dressed in capes and hoods stood on stage, video screen behind them while church music blares out, the next minute the capes are off and they mix a backing track with live guitars and vocals in a weird bastardisation of europop. Those that know them dance and sing along, those that don’t look on baffled at first but then concede defeat as their relentless energy and not giving a fuck attitude reveals itself. There’s a weird obsession with being called Daddy going on from the guitarist and they throw fortune cookies at us half way through the set as they pause for breath. They leave the stage to a roar from the crowd and the video screen before heading back out with the cape round their necks for a cover of Wuthering Heights that could make them Tik Tok sensations. It’s all a bit bizarre and a lot of fun and I’d be lying if I said they were shit.

New York's Spud Cannon are absolutely magnificent, the sort of band you can't work out why they're not headlining huge stages rather than a tiny basement in the Northern Quarter. Their songs are perfect slices of alternative pop music, infectiously catchy choruses and melodies with oh so delicious harmonies that you find yourself unable to resist and to be drawn into the absolute ball that they're having on stage. Each of these three minute or so songs is a glorious embodiment of the joy music can bring for both audience and the band themselves. 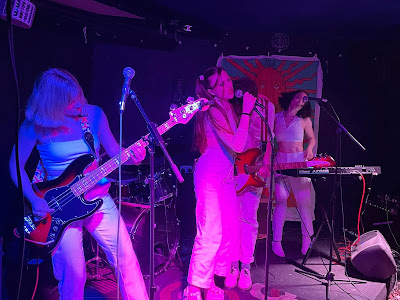 A grin never leaves their leader Meg's face throughout their fourteen song set whilst guitarist Jackson completely loses himself in the moment as if he's living out his rock star dream. Bassist Lucy delivers many of those vocal harmonies that lift these songs whilst forming a superbly tight rhythm section with Benjamin on drums, the mainstay that holds together these wonderfully upbeat songs that you might never have heard before but wondered what you did without them and completing the line-up Ari on keys gives these songs the synth shimmers that lifts them out of the ordinary indie guitar world and on to a pedestal.

Live they've got a harder edge than the recorded versions, starting at the back with the drums and working its way through the driving guitars and the excited backing vocals to Meg, but they've also got the ability to slow things down on Breathe With and February and a danceable edge to them, particularly on the funky Out! and their own schizophrenic take on Funky Town that ends the main part of the set before an impromptu encore of Mr Boogie that they tell us they've not played in over a year.

Their set takes songs from their three albums to date - last year's Good Kids Make Good Apples, 2018's Squeeze and 2017's debut Next Time Read The Fine Print - although such is the consistent high quality and real identity to them it's hard to distinguish the older from the newer. That's not to say these songs all sound the same though, far from it, each possesses an identity of its own that ensures each one reveals a new shade and flavour to Spud Cannon. Best of all is a new song, Wanna Go Out, written unsurprisingly about the frustrations of lockdown. Jackson tells us their manager described it as "not a hit" and asks for our opinion. In a crowd that were, it seemed, here for the support bands they've already won everyone over, the response is pretty much unanimous that it's a hit. But there again, every other one of the thirteen songs should be a hit too.

Spud Cannon played Thrum A Dum, The Lucky Ones, Juno, Out!, Wipe It Out, A Screw Fell From His Head, Sleeper, Breathe With, Wanna Go Out, February, You Got It All (NOT), Ow Ow, Funky Town and Mr Boogie.