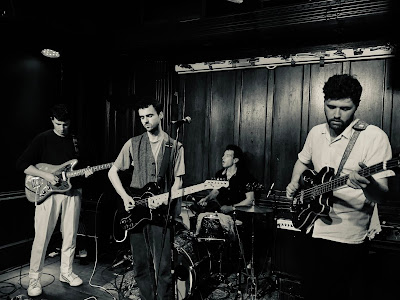 Odd Morris bade farewell this week with a series of shows in their native Dublin and across the UK. We caught their penultimate show at The Castle in Manchester on Tuesday night, a bitter-sweet experience of witnessing a band doing what they love yet knowing that it would be the last time we see them perform together.

Bleach Boy open up proceedings and they've brought a decent crowd with them, who unlike many local supports hang around for the main act and who really create a genuinely celebratory atmosphere for a Tuesday night with light still streaming through the roof of The Castle's music room. Bleach Boy describe themselves as a post-punk / grunge band and there's hundreds of them about, but they've got enough about them to stand out, have an individuality about them that many bands seem to forget about. The songs don't stick to traditional structures, there's moments of raw pugilism, hard-edged guitars and drums, some wildly out-of-place brass and Milo's primeval roar, a vocal style that might not be to everyone's taste but which is perfect in the context of what he and his band mates are creating. He spends a lot of time out in the audience too, living his best life and lost in the moment. They might be raw and imperfect, but that's fine because it makes them exciting and unpredictable. And standing out is better than being one in a crowd. 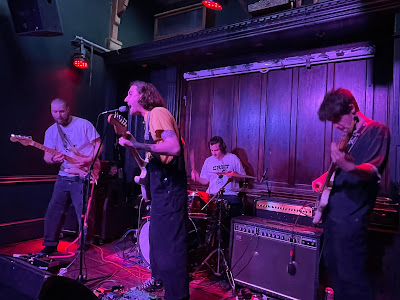 Back in March 2020 there felt like there was a growing buzz around Odd Morris. Their early singles had pricked the ears of many who were drawn in by their wonderfully melodic yet intense art. They may have lacked the explosive energy of the likes of fellow Dubliners The Murder Capital and Fontaines D.C. but that by no means meant that they didn't touch the rawest of raw nerves, capturing the uncertainties and insecurities of living in a modern world where you're expected to be living the best version of yourself twenty four hours a day seven days a week. They're modest, unassuming and devoid of any flash or extravagant behaviours other than the flourishes in Sam's drumming, but the impact they leave is equally powerful.
Lockdown hasn't been kind to them, cutting them off just as they were about to take off. They did release their wonderful Cityscape The Ballet EP, of which four of the five tracks naturally make an appearance tonight, but the momentum was lost and in a world where real life and the practicalities of living it alongside the dream of a music career became an increasingly precarious one, they've taken the decision to draw a line under Odd Morris and this show was their penultimate show before their final one in London. There will be many artists out there making similar decisions over time, an artistic long COVID, and it's going to leave some big holes where new music once bloomed. 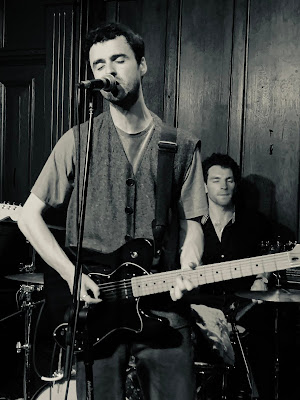 The size of that hole in this case we're given a glimpse into by the appearance of four unreleased songs - Untitled (Disco), Fervent Eyes, The Nothing New and W.F - alongside their first four singles that made their mark - What Might Be and Cold Water that open the set, Your Four Walls and their final track Lilac Leaves.
Interspersed are the tracks from Cityscape The Ballet. The highlights are the title track laments the gentrification and concrete jungles that are taking over the Dublin skyline, but which feel equally apt in Manchester and most other cities and the short but powerful Silhouette, a two-minute arm around the shoulder that tells you it's OK to cry and be vulnerable and not to keep everything in because it'll eat you up from the inside and which demands your attention to listen to Darragh's words to fully understand the importance of Odd Morris's message where their less subtle contemporaries rely on power and volume.
Odd Morris may not have made the mark they intended, or at least on the scale that they intended, but for those who'd stumbled across their path they were vitally important, as much so as those celebrated contemporaries we mentioned earlier - a band that were all about the music and the message. They'll be very much missed and be one of those bands that people discover and feature in those "great lost acts" pieces in years to come.
Odd Morris's website can be found here and they are on Facebook and Twitter.
Our review of Cityscape The Ballet can be found here and it can be ordered on vinyl here.
Bleach Boy can be found on Facebook.
________________________________
Follow Even The Stars on Twitter at @eventhestarsuk and like our Facebook page for all the latest updates
Posted by Even The Stars at 17:18