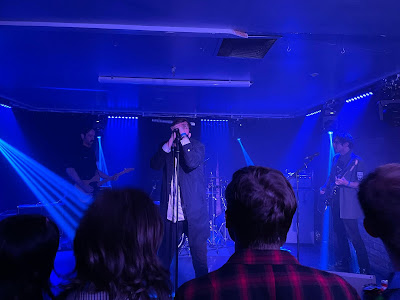 It's not often you catch a band that was involved in a chart battle at the very top end of the album charts in a small venue, but Monday night saw Yard Act hit Warrington and the intimate surroundings of Friars Court for a special set featuring tracks from that album The Overload as well as a few crowd favourites and a special guest appearance.

This Warrington show, at a venue many times smaller than the ones Yard Act are now filling around the country, was part of their crazy quest to top the charts a few months back with ticket sales accompanied by a copy of their debut album The Overload. Chart chicanery aside though, these events have the associated benefit of bringing bands to towns that are often starved of well-known bands coming through to inspire young aspiring artists leaving the town centres to be blighted by karaoke bars and open mic covers nights and a scene that's often fighting to be acknowledged. Warrington has a strong one too, partly a legacy of the wonderful and sadly-departed Viola Beach. Friars Court is a great 200ish capacity venue, ideally placed to attract people in from stations to the big cities of Manchester and Liverpool which often act as a drain and Warrington Music acts as a mouthpiece and champion of it.

Nuha Ruby Ra opens the night and is a challenging opener to those who have come expecting four more white guys with guitars. She's on stage alone with two microphones and a backing track, starts by recommending an Irish bar and sushi restaurant in town before delving into a half hour journey through an intensely personal set of songs, some taken from last year's debut EP How To Move as well as her recent single My Voice. 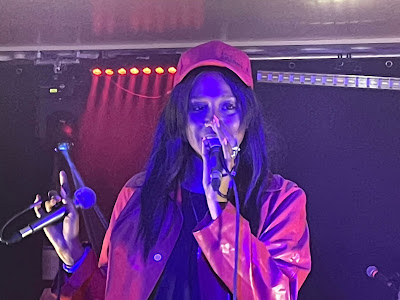 The music veers from rumbling industrial to more melancholy and reflective with the one constant her half-sung, half-spoken vocals revealing dark intense moments, losing herself as she repeats "tick, tock, tick, tock, I tie myself up in knots" on Cruel, the shimmering on the surface yet darker under the surface Sparky and the EP's centrepiece Run Run which feels like a very public expulsion of demons. Powerful and intoxicating, but with a sense of humour when she declares we'll be seeing a calmer version of her as it's a Monday, she wins over most of an initially sceptical room by the end.

Warrington is a sort of homecoming for Yard Act's front man James Smith. He introduces them as a band from Leeds before placating the playful boos with this information before spending much of the between song reminiscing about nights in Friars Courts, stolen kisses, drunken trips to legendary local takeaway Danny's Kitchen for half rice half chips and beef satay for £3 and various local landmarks around the town and its suburbs. He even gets his grandad Dave up on stage to sing Green Green Grass Of Home as one of the strangest but most heartwarming encores we've ever seen and Ryan gives him a gold inflatable crown to wear during Dead Horse as the "King Of Warrington" as part of a band ritual for hometown shows.

There's been a backlash from certain quarters against Yard Act given the high profile nature of their album campaign, an opprobrium against what's been dubbed Sprechengesang as if to somehow diminish what Yard Act do. They connect and talk to people, they speak out against commercialisation, gentrification and racism directly and whilst they're serious in their message and how they express it, they don't take themselves too seriously. For the encore they crouch down for a minute rather than try and find the dressing room behind a maze of corridors and for their final song of the evening, early favourite Fixer Upper, they put the choice to a public vote. 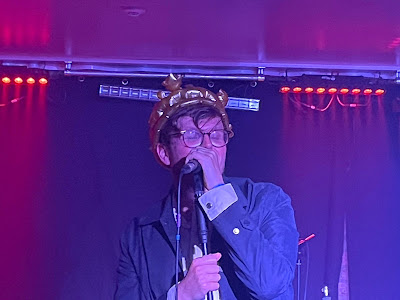 With the focus on the style of singing what's been hugely overlooked in Yard Act's rise is the fact that this is a group of musicians who've been on the circuit for years for little reward. James bemoans a couple of times that they haven't seen any of the supposed riches that come with success, laughing that it would make Rich even more ironic if they had. Sam is an accomplished guitarist and there's moments where he's left to take the lead and the songs veer away from the recorded versions and have an improvised feel to them whilst James adlibs lyrics, throwing in references to Warrington and local landmarks.

"We'll be back, but not here" is their parting shot before the final song and they may well be across town in the more salubrious but less intimate Parr Hall where they'll face the challenge, as they will this autumn in similar size venues, of retaining the friendly intimacy, the sense that you're watching your mates play that comes across with them as James thanks and acknowledges everyone at the door as they leave. Success may have brought out the haters, as it has for fellow breakthrough act Wet Leg, but they, like us, clearly don't care.

Yard Act played The Overload, Can I Get A Witness, Dark Days, Land Of The Blind, Dead Horse, Tall Poppies, Pour Another, Rich, Payday, 100% Endurance, Green Green Grass Of Home and Fixer Upper.