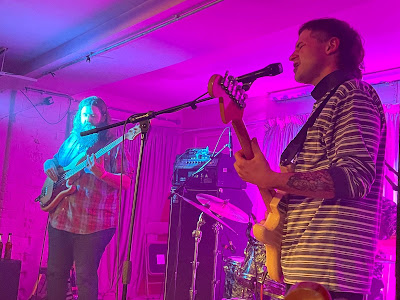 Ryley Walker made a long-awaited return to Manchester for the first time in five years on Thursday night in the Pink Room at Yes. With tracks from his last album Course In Fables as well as old favourites from his now substantial songbook delivered with an improvisational spirit and scant regard for the structures of the recorded versions, he held an enthralled and besotted audience rapt over the course of ninety minutes.
Simon Joyner opens up the evening and we're treated to the novelty of a Pink Room full of people but with reverential silence whilst the artist is on stage, something we've never experienced before. With a career spanning thirty years and champions such as Bright Eyes, Beck, Ryley and John Peel who once played one of his albums in full on his show, he commands the respect of the room. With songs from his recent album Songs From A Stolen Guitar, including the title track, Live In The Moment and The Actor, as well as going back into his huge back catalogue for the selected highlights of the likes of Joy Division, Slow Down and Old Days, it's a reminder of the simple magic and power of a voice, guitar and rich storytelling. 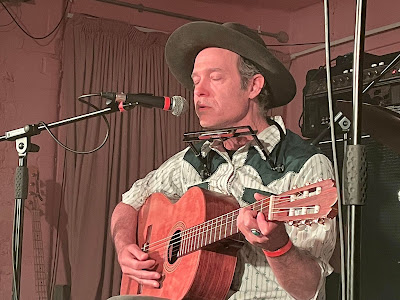 "This gig is for John Hall, we miss him, legend, love you John" are Ryley's opening words to a room full of people who then proceed to hang off every note and word of his ninety-five minute set that takes tracks from across his career and at times renders them unrecognisable, accompanied by Andrew Young on bass and Quin Kirschner on drums. At points he tells us it's like being "melted in a University dorm in 1973" and with an array of effects pedals in front of him so obscene that people move forward to take pictures and videos of them rather than the band.
His chat between songs is off-the-cuff and hilarious, he declares his love of Tesco coleslaw that descends into a debate about their political leanings, other supermarket products and imagining being in charge of the mayonnaise, he makes cultural references to the city with bucket hats and the Van Der Graaf generator. He makes a drug dealer reference but then tells us, to huge applause, that he's three and a half years sober. He engages with the audience, spotting people he knows from previous shows and acknowledges them before inviting us all to his favourite home The Castle at the end of the night. He modestly tells us at one point that the others are superior musicians to him, but he's doing himself a massive disservice as he shows at the end of the night with a solo encore of Tim Hardin's If I Were A Carpenter. 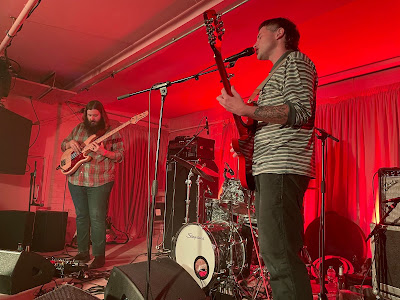 The sobreity hasn't dimmed his wild creative spirit and with Andrew and Quin fully atuned to him, it feels at times like we've been invited into a private jam session - songs have extended intros that often bear little resemblance to the song in the middle and are driven by an intuitive connection between the three of them that leaves the audience awestruck. The Roundabout is extended to over twenty minutes with the core song split into two sections in the middle with the extraordinary pedal board in front of Ryley given a full workout. Telluride Speed isn't on the setlist but makes an appearance as one of the amorphous jams melts into it and the three of them just go for it.
The love in the room for Ryley is palpable. He might be an American from New York but there's something in his manner, his carefree demeanour and his love of our city that makes him connect with Mancunians and our love of the outsider. There are way less talented, prodigious and prolific songwriters out in the world that are celebrated and championed in the here and now. Ryley Walker will be one who leaves a legacy for generations after him to discover and excitedly tell their friends about - these live shows are moments in time though, spontaneous and exciting, the thing we really missed in the two years we lost. There was a reason why John Hall loved Ryley Walker and it's the same reason why Ryley loved John. Two unique peas from very different pods.
Ryley Walker's website can be found here. He is also on Facebook and Twitter.
His tour continues at Newcastle Cluny 2 (20) and London Earth (21) and further dates can be found here including UK dates at Belfast Ulster Sports Club (August 28), Glasgow Broadcast (29) and Leeds Brudenell Social Club (30), .
________________________________
Follow Even The Stars on Twitter at @eventhestarsuk and like our Facebook page for all the latest updates
Posted by Even The Stars at 01:30