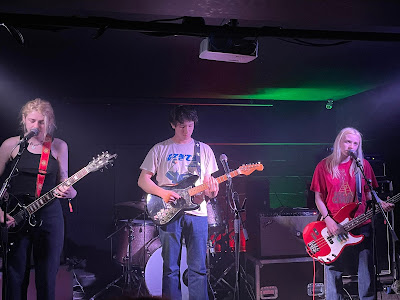 Momma are about to release their third album Household Name on July 1st and this Manchester show, as part of the ongoing Mood Swings events, is the final stop on a whistlestop tour that coincided with The Great Escape in Brighton and the release of Speeding 72, the third single to be taken from the album.

It's busy but not full as Momma take to the stage in front of an audience that seems to want to be impressed before involving themselves in the event, but it doesn't take long for the four-piece, fronted by Etta Friedman and Allegra Weingarten to do just that, taking us on a whistle stop trip through their two albums to date (Two Of Me and Interloper) as well as a potted introduction to Household Name via the three singles - Medicine, Speeding 72 and the set-closing Rockstar.

There's a real contrast between the stage presence of the two of them but they work together perfectly both visually and sonically. Allegra is more restrained, taking on the majority of lead vocals, Etta lost in the music. They relax as the set progresses, asking whether we're all Oasis fans because we're in Manchester (to a surprisingly negative response), but laughing off a request for a cover of Wonderwall (they covered Blur's Song 2 at a London show earlier in the tour) as the audience starts to respond to them. 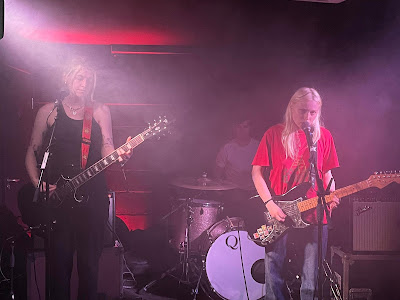 They don't try and overwhelm us with raw power which allows the melodies in the songs to really shine through whilst still maintaining a harder edge to the live set than on record. They'll attract inevitable comparisons with the grunge scene of the 90s, but Momma are doing something a little different, putting their own mark and personalities on these songs rather than reciting well-worn paths. Having two albums on which to design their craft under most radars has clearly had a beneficial effect as they come across as perfectly-formed and ready for adulation that should come their way with Household Name.

The only issue with the evening is the length of the set. Fitting four bands in with a 10pm curfew for a club night means we only get half an hour, which given the £5 ticket price we can't complain too much about, but it seems unfair to a band that's travelled from the States and on the day up from Brighton after a late-night triumphant show to give them such a short set. They'll be back of course once Household Name is out and they're set on the path towards becoming one, at least in the homes of those who love this genre of music.

Email ThisBlogThis!Share to TwitterShare to FacebookShare to Pinterest
Labels: Momma