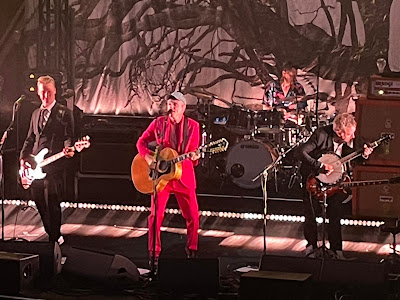 Travis brought their Invisible Band tour to Manchester's Albert Hall on Tuesday night where they performed one of their classic albums in full followed by a mini greatest hits set in a sweltering hot room. Support came from Ben Ottewell with a solo acoustic set of Gomez favourites.
Ben Ottewell opens up the night with a six-song acoustic solo set of Gomez tracks, including a new song called Rose that he announces will appear on their forthcoming album and five more familiar numbers - How We Operate, Whippin' Piccadilly (about "going to a gig in Manchester" he tells us), Here Comes The Breeze, Bring It On and Tijuana Lady. He gets a warm response from the majority of the crowd although the chatter is audible, particularly up on the balcony where we are, but he's not fazed by this one bit, delivering intense versions of songs that have filled this hall and many others in their own right. 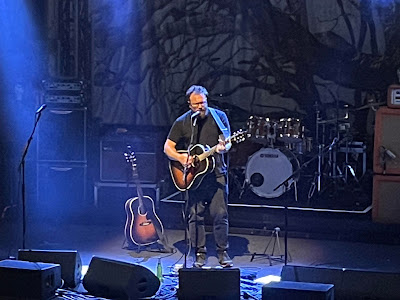 Album celebration shows can be a tricky thing. It's rare for a band when an album is released to play that album in the order it is released and there's a reason for that. What works at home doesn't necessarily work in a room full of people, the build of a live show is different to that of an album. It's accentuated by albums released around the time of The Invisible Band at the turn of the century where record labels insisted on albums being front-loaded. With that in mind, the album's three singles - Sing, Side and Flowers In The Window  are within the first five of the twelve songs of the first half of the set before the audience has properly warmed up while the more reflective second half of the record, strong as it is, has a series of less immediately recognisable songs that haven't been part of the Travis live set for over twenty years in some cases. It's emphasised in the second half of the set where there's a six song mini greatest hits section where the whole building is up on their feet and you can feel the excitement and communal atmosphere of a more traditional Travis show.
Fran is as endearing a front man as ever and both Andy and Dougie interact with the audience at the front and up in the sides of the imposing Albert Hall. Fran asks at the end of opener Sing who put the cooker on as the Albert Hall already feels as if it's at boiling point and later in the set he's on his knees, exhausted, dehydrated and spent but insistent on carrying on. He dedicates Flowers In The Windows to anyone who's just met the love of their life. With other people it would sound cheesy and possibly insincere, but from him it's genuine as is his often irreverent chat and introductions to the songs. As they finish The Invisible Band set with Humpty Dumpty Love Song, a curveball at the end of the second side, he becomes reflective, with his decades old ghetto blaster by his side reminiscing about his friend who died last year at the age of fifty. 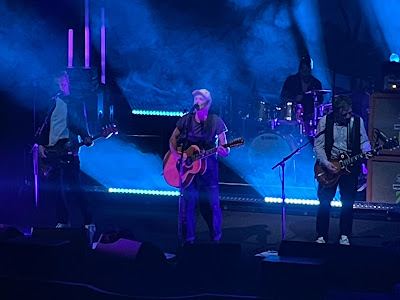 The short break between the two parts of the show seems to invigorate the audience with a new energy. A Ghost, the sole track taken from last year's return-to-form 10 Songs album, for which this date was originally meant to be part of the tour to promote, opens up the second half and sees the audience participating, hands clapping, phones in the air, capturing a moment. Whilst Fran is clearly struggling with the heat, down on his knees looking as if he's not going to be able to continue at a couple of points, he takes a pause, Dougie chatting to the crowd while his band mates takes a short breather, the audience take over on the choruses of Reoffender, Driftwood, Closer and Turn.
They finish on their traditional finale Why Does It Always Rain On Me. As it hits the breakdown Fran stops and tells us that we have to bounce during the final chorus, as is tradition at Travis shows, including the bar staff, and the Albert Hall's floor and balconies are given a testing by two thousand bodies complying with his request. It's an ending in fitting with the live Travis experience and atmosphere that people have come to know and expect and which, while The Invisible Band is up there with their finest work and performed with great love and attention, was slightly thrown off-track by the classic album format of the show.
Travis's official site can be found here and they are on Facebook and Twitter.
The Invisible Band tour continues at Bournemouth O2 Academy (May 18), London Roundhouse (20), Newcastle City Hall (21) and Glasgow Royal Concert Hall (22) before they play Isle Of Man Douglas Villa Marina (August 9), Derry Millennium Forum (11), Belfast Waterfront (12) and Edinburgh Princes Gardens (14) before heading to the US in November.
Ben Ottewell is on Facebook and Twitter.
________________________________
Follow Even The Stars on Twitter at @eventhestarsuk and like our Facebook page for all the latest updates
Posted by Even The Stars at 07:00