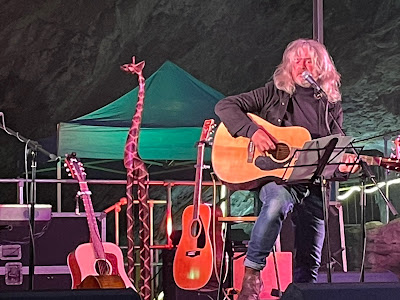 John Bramwell brought his Full Harmonic Convergence to the picturesque and unique setting of the Devil’s Arse Peak Cavern in Castleton for an exceptionally special long-delayed two hour set primarily featuring songs from their upcoming album The Light Fantastic interspersed with tracks from his Leave Alone The Empty Spaces solo album and his I Am Kloot back catalogue.

Whilst continuing to tour the country with his campervan performing intimate solo shows or accompanied by one or two of The Full Harmonic Convergence, John Bramwell has been working on an album with the band that’s taking on mythical status within the dedicated I Am Kloot fanbase that tonight hang on every word and note; for the most part of the evening the only sound that can be heard in the cave other than those from the stage are those of water dripping from the roof of the cave onto the rock below.

It would be simple for Bramwell to simply rest on his laurels and the substantial back catalogue he’s amassed over time, first as Johnny Dangerously (and he promises a You, Me And The Alarm Clock gig, before laughing it’d be short, after a jaw-droppingly beautiful Black And Blue as part of a solo section mid-gig) and then as the frontman of I Am Kloot. However, he’s set about, with a meticulous search for perfection that, along with the pandemic, has endlessly delayed its completion then release, means he’s about to release potentially (and we use that word only because we haven’t heard the finished version) the finest piece of work of his four-decade life in the industry he rebels against from the inside.

Ten songs from the album make up a significant proportion of the set, with John accompanied by Dave Fidler on guitar / bass / backing vocals, Harriet “the big H” Bradshaw on cello / backing vocals, Alan Lowles on keys / accordian, Tim Fisher on cajon / backing vocals and Nigel Wynn on harmonica. The songs cover many bases - the drama of I Am The Sky, the wistful optimistic almost pop of World Full Of Flowers and Sky Full Of Thunder And Lightning, the country-tinged I Feel Me and the predominantly spoken word of Nothing Left But You (after which John jokes “pretentious? Us?”) being particular highlights. 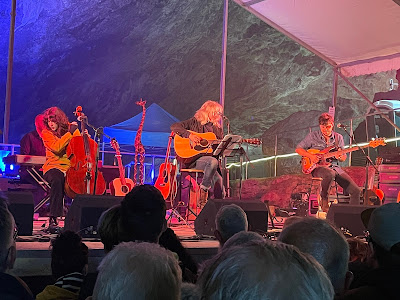 There’s even space for a “new new song” Before The Lights Went Out, an emotional tribute to John’s friend the late great Bryan Glancy that recalls the energy and devil-may-care optimism of younger life and a regret at no longer being able to do those things. Add to that five tracks from John’s solo album Leave Alone The Empty Spaces - the set-opening title track and its lead single Time’s Arrow, a gorgeous shimmering Sky Full Of Thunder And Lightning, the infectious Who Is Anybody Anyway and the simple yet affecting Meet Me At The Station, with just John and Nigel, that demonstrates that John can make this type of song look so effortless yet do it so much better than pretty much all his peers.

There are of course some I Am Kloot classics that allow the reverential audience to find their voice. The gig ends with the traditional duo of Northern Skies and Proof and before that there's 86 TVs with John, Harriet and Alan, solo versions of Bigger Wheels and No Fear Of Falling, a band version of The Same Deep Water As Me with Harriet's cello replacing the sax and giving it added poignancy and depth, a raucous To The Brink where the audience participation on the accordion solo is replaced by Alan playing the accordion to huge cheers and an understated I Still Do. The venue, the attention and silent respect of the audience make the songs feel even more poignant and resonant than ever.

John's on excellent form too, joking about his hair, adlibbing a couple of lines from Herman And The Hermits' There's A Kind Of Hush, knocking a stool over and telling the stories that have become his trademark, familiar to those who've seen him many times before but which never fail to raise a smile because of the way in which they're told. It's at that moments you realise John Bramwell is more than a musician, he's a storyteller, whether he has a guitar in hand or not, and these stories tell not just the stories of his life and his observations but of all of us too. He's still making music that matters to those who understand what he's imparting and whilst others rest on their laurels, he's making it better than ever before.

They played Leave Alone The Empty Spaces, World Full Of Flowers, Element Of Truth, Sat Beneath The Lightning Tree, Who Is Anybody Anyway, 86 TVs, Bigger Wheels, Before The Lights Went Out, Black And Blue, No Fear Of Falling, Meet Me At The Station, The Same Deep Water As Me, To The Brink, It's Just You, The Light Fantastic, Sky Full Of Thunder And Lightning, I Still Do, I Feel Me, Here It Comes, Time's Arrow, I Am The Sky, Nothing Left But You, Northern Skies and Proof.

Email ThisBlogThis!Share to TwitterShare to FacebookShare to Pinterest
Labels: I Am Kloot, John Bramwell, John Bramwell And The Full Harmonic Convergence