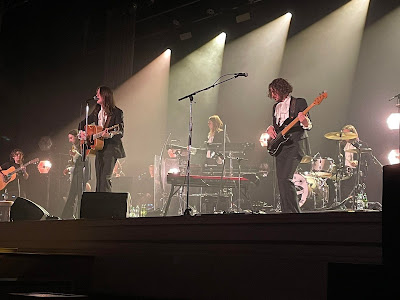 With their fourth album Ribbon Around The Bomb sitting at number one in the midweek charts, Blossoms continued their tradition of playing a special hometown show at the Plaza in Stockport to celebrate its release. Playing the album in full accompanied by a string section followed by a short set of some of their biggest singles to date they preceded the show with a special film soundtracked by the record and with some added drama of a fire evacuation to boot.
Before the live show, Blossoms premiered a film entitled Ribbon Around The Bomb which they made at the Plaza with director Edwin Burdis, who worked with Arctic Monkeys on visuals for AM and Tranquility Base Hotel And Casino, that features the videos from the singles from the record so far as well as a special version of Everything About You with Myles on an organ and Josh on acoustic guitar and Tom singing sat in theatre stalls as a love story enfolds between two of the characters.
The storyline of a director making his return to the stage after four years following an unspecified tragedy that haunts him with allusions about not falling in love, not drinking and not partying after the shows is made harder to follow half way through by the sound of a fire alarm that sees us evacuated from the building for half and hour and which distracts the concentration of some of the audience around us for the second part who think the live set might get curtailed.
It doesn't as we go right up to the 11pm curfew as a quicker-than-planned changeover is made by Blossoms' trusted crew and as the curtain goes up to a huge roar, the string section is revealed as they go into the short The Writer's Theme instrumental before the album's trio of recent singles - Ode To NYC, Ribbon Around The Bomb and The Sulking Poet kick things off as most of the downstairs slowly and politely make their way to their feet where they remain for the rest of the night. 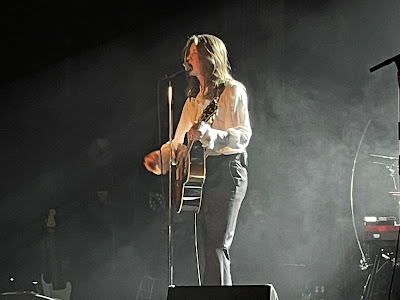 Ribbon Around The Bomb's strength, compared to previous Blossoms albums, is that there's never a moment where the quality dips at all. Whilst there might not be quite the standout and very obvious singles that might disappoint the dark fruit crews who want another Charlemagne, there isn't a weaker track here and playing the album live in order underlines that. If anything, it's the supposed supporting cast where it's at its strongest. Born Wild is restless, wistful and made for a sunny day driving out in the country with the roof down and Everything About You is possibly their finest song to date - the line "don't worry you know that you've got someone to deep sea dive into your head" sung by Tom and Charlie is a glorious celebration of love and finding "the one". The Writer sees the others leave the stage for Tom to perform it acoustically solo and the audience respect his request for silence as it's performed.
There's moments of humour, Tom telling Myles to "do the slide thing" as Care For gets to its final chorus, he responds to chants of "Oggy Oggy Oggy" with a riposte of "not heard that since under 12s" and when someone shouts "all back to Tom's" he replies "not tonight" before pausing and adding "not ever" to huge laughs from everyone and not to forget Charlie's legendary grandad shouting encouragement from the side just as he did back when they were playing the smallest venues round here. Josh comes on stage between the outro The Last Chapter after a curtain mishap and tells us that it's the venue's birthday before being rescued from his awkwardness by his band mates coming back and hugging him.
They finish with six songs that make up a mini greatest hits set, Tom teasing us if we want two, then three, four and five before saying "let's do six" and those who'd remained seated throughout the album set get on their feet for Your Girlfriend and staying there through a glorious Honey Sweet and There's A Reason Why before they finish inevitably with Charlemagne.
There's a real sense of joy up on stage, smiles, knowing looks, them moving together in small groups and smiling at each other. With their strongest album to date heading for number one, the festival season ahead of them before a full album tour, we assume, to come, it feels like Blossoms momentum is becoming more unstoppable with each passing record, picking up people en route rather than having a crowd fixated with their debut.
Blossoms' official website can be found here and they are on Facebook and Twitter.
They played The Writer's Theme, Ode To NYC, Ribbon Around The Bomb, The Sulking Poet, Born Wild, The Writer, Everything About You, Care For, Cinerama Holy Days, Edith Machinist, Visions, The Last Chapter, Your Girlfriend, If You Think This Is Real Life, Oh No (I Think I'm In Love With You), Honey Sweet, There's A Reason Why (I Never Returned Your Calls) and Charlemagne.
________________________________