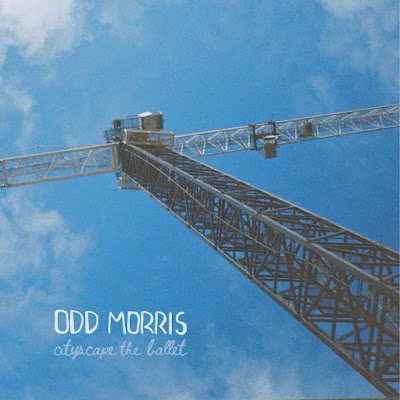 Before revealing The Once Was Enough, the first track to be released from Cityscape The Ballet, Odd Morris had already made their mark with a series of singles - What Might Be, Lilac Leaves, Cold Water and Your Four Walls. They marked them out alongside fellow Irish bands like The Murder Capital who they supported just prior to lockdown as creators of music that wasn’t afraid to delve into the murky waters and toxic masculinity. Odd Morris’s approach has always been much more considered and restrained in its execution and Cityscape The Ballet very much feels like an extension of that, a broadening of horizons, a deepening of the questioning in the search for answers.
Opening line Rose Like Smoke tackles the subject of relationships opening with the pessimistic but often true line - “what’s life but the promise of love? We rose like smoke only to fall with the weight of the world” before questioning whether we are better on our own or in relationships unhappy yet fearful of being alone, a subject most people will be able to relate to. The guitars and tight taut repetitive drum patterns heighten the feeling of claustrophobia or cabin fever that such situations create.
The Once Was Enough treads similar territory thematically set to a rumbling bass line that gives a sense of an impending something happening. Fear sits at the heart again - “So delicate on skin, wanna taste it again, Don’t wake me up I’m dreaming, don’t let me see the morning alone” - evocatively describing that feeling without wallowing in self-pity.
Silhouette deals with the way men, in particular, are afraid to express their feelings and how that can lead to more trouble in the long run. It asks the very pertinent question "but do you feel alright? because if you don't, just know that it's alright" before dissecting the fact that not accepting that can end in tragedy for the "men who've never open up about the shit in their head" if they try and fit the expectations of their grandparents in the modern world ("we're a different generation lads").  Daragh’s vocals have a warmth and depth to them that makes them feel even more personal.
You Tried is an arm round the shoulder of someone experiencing loss or emotional overload, Daragh reassuringly advising “just lie down, even angels need their rest, lie down with me.” Once again Mac, Kris and Sam create the perfect soundscape to accompany his words, accentuating the feeling of warmth and understanding in tight patterns that really set the listener’s emotions on edge and draw you in.
The title track brings Cityscape The Ballet to a close and, at close to five minutes, represents their most ambitious and expansive song to date without losing touch with what’s gone before it. It focuses on the claustrophobic nature of living in the city, something many of us will have been able to relate to. Once again the language is clever and evocative - the race to build high-rise high-density living described as a “game of tetris that nobody wins” - before the song moves into a long instrumental section that feels like the perfect soundtrack to that sense of being lost in a city and yearning for something else.
Cityscape The Ballet is a detailed yet nuanced exploration of the mind and the pressures that other people and the environment around the individual place on them. It has a disarming honesty and relatability to it created by Daragh’s turns of phrase when describing something that many are incapable of properly wrapped in tunes that never overpower but which reinforce the words in the same way the words seek to reinforce their listener. It may take a few listens to fully appreciate its magic but it’s time well spent.
Odd Morris's website can be found here and they are on Facebook and Twitter.
They play Glasgow Hug And Pint (November 3), Manchester Gullivers (4) and London Sebright Arms (5) and concluding with Brighton Mutations Festival (6).
________________________________